Is Yoon Joo going to get in big trouble? 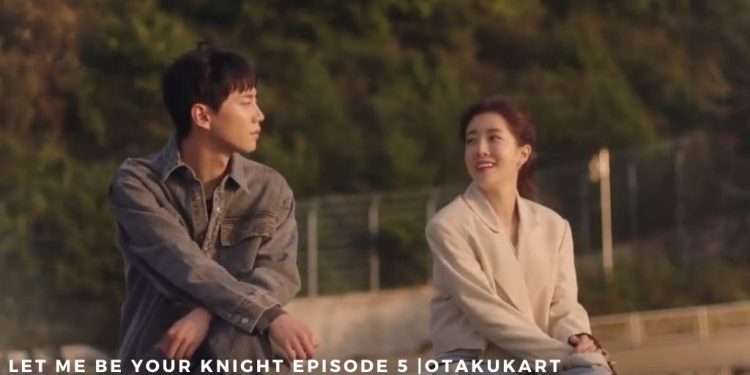 Let Me Be Your Knight

Fans are over the moon to watch Let Me Be Your Knight Episode 5! Let Me Be Your Knight is a perfect combination of fun and romance with a unique twist of music. The k-series touches upon the serious mental health issues celebrities go through.  Just like the members of LUNA, celebrities have to face harsh comments about themselves and their loved ones, no say in their love life, a hard time balancing their work and private life, and most importantly, no one to go to.

The main lead of this kdrama, Tae-In, has gone through a hard childhood which may be the reason for his sleep illness. Even when he was a child, his father, who was a professional pianist, made him practice until he was perfect at something. Because of the cruel comments  Tae-In’s father usually gives him, he has low self-esteem and is very sad from the inside.

He takes music-making too seriously and forgets to have fun while listening to his own creation. However, it seems like Tae In has started to confide himself to someone. And that someone is our female lead, Yoon Joo. Because of this, fans got worried when he found out that Yoon Joo was not Dr.Kang. Will he be heartbroken, or will he understand her circumstances? Or will Yoon Joo lose her job as Dr.Kang? Check out the release date and predictions for Let Me Be Your Knight Episode 5 so that you don’t miss out on the answer.

Let Me Be Your Knight Episode 5 Release Date

Fans have been swooning over Tae In and Yoon Joo’s sweet romance. They couldn’t stop smiling when Tae In became jealous of Woo Yeon when Yoo Joo was fluttered by Woo Yeon’s gift. The audience has been looking forward to the episodes to watch Jung In Sun and Lee Jun Young’s unbeatable chemistry. So, without making you wait any longer, the release date of Let Me Be Your Knight Episode 5 is December 5. Let Me Be Your Knight or Idol’s Doctor airs new episodes every Sunday at 11:05 PM according to Korean Standard Time.

Along with having a great storyline, the kdrama has gifted the audience great songs. Surprisingly, many people in the audience even liked the song that had flopped. To make things better, Girl’s Generation’s Sunny will also be singing a sweet OST for this kdrama. If that doesn’t convince you to watch this kdrama, we don’t know what will!

Where To Watch Let Me Be Your Knight Ep 5?

Of course, this kdrama wouldn’t be complete without its love triangle. In Tae and his bandmate, Woo Yeon, have seemed to have fallen in love with the same person. Also, to most of the audience Woo Yeon, the second main lead, has already lost the match. Yoo Joo doesn’t seem to have feelings for Woo Yoo and rather thinks of him as a friend.

Plus, there seems to be a lot of tension between these three characters in the next episode. Although the audience thought that things were going to go downhill when Tae In found out about Yoon Joo’s true identity, it actually didn’t. In the next episode, Tae In keeps an eye on Yoon Joo.

He also seemed to be checking whether Yoon Joo likes Woo Yeon or not.  Besides the tension between Yoo Joo, Tae In, and Woo Yeon, there is something going on with Ga On. The audience thinks that Ga On likes the boy who is a member of the rookie boy group LUNA met at the Green Concert.

It seems that Ga On has been trying to hide his feelings because e the public wouldn’t show a great reaction to them. What is in store for these characters? Don’t forget to watch Let Me Be Your Night Episode 5 to find your answers.

Greta Thunberg’s Boyfriend: Who Is The Swedish Environmental Activist Dating in 2021?