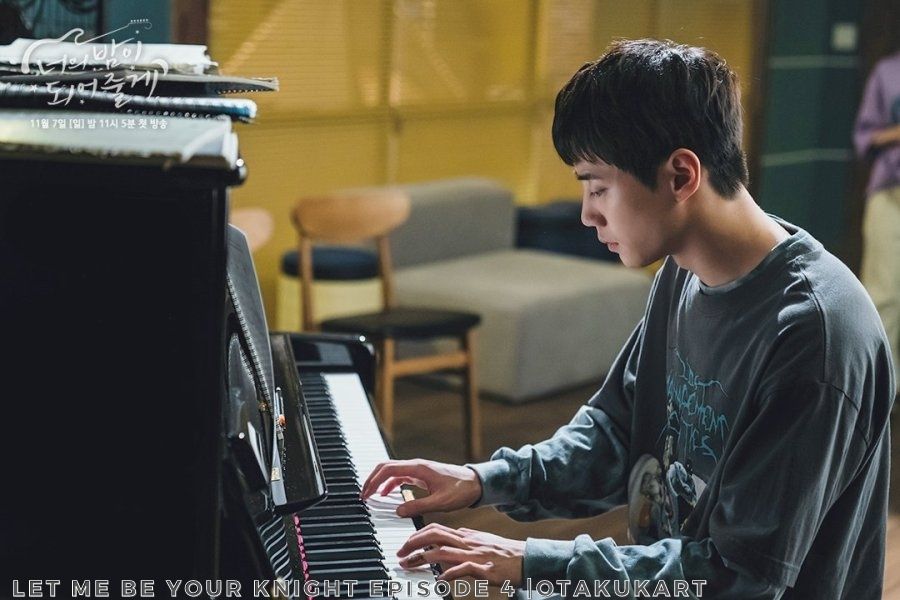 Let Me Be Your Knight Episode 4

Let Me Be Your Knight Episode 4 is just a few days away. From the acting to the humor, everything in this kdrama is top-notch. Also, as the fans had expected, In Yoon Joo and Yoon Tae In started avoiding each other after the accidental kiss. To make it worse, not only them but two more people saw the accident.  First up it was Woo Yeon who had found out about the accident. He was just enjoying some alone time drinking some beer when he saw the accident. The audience doesn’t know how in the world Lee Shin found out about it, but he surely knows what had happened. When Yoon Joo was taking him what he had been doing outside, he told her to keep his secret or else he will tell her secret to everyone.

With that, Yoon Joo tried to cover up for Lee Shin as she did not want anyone else to find out about the accident. The latest episode of Let Me Be Your Knight even gave the audience a sneak peek into the tough lives of the members of LUNA. It shed light on the hardships even real idols go through. Taking Yoo Chan’s example, when he was seen at a designer boutique, people started bashing him for no reason. They started saying awful things like ‘shouldn’t he be practicing, ‘is he even a member of LUNA’, and ‘he looks so ugly’. And the sad part is, he wasn’t even shopping for himself but when there because his mom called him to give her some money. This scene really touched upon the toxic comments people have on celebs.

Don’t miss out on the kdrama, and check out the release date and predictions for Episode 4 of Let Me Be Your Knight.

Let Me Be Your Knight Episode 4 Release Date

This episode will soon be gracing your screens in a few days. The release date of Let Me Be Your Knight Episode 4 is 28 November. Fans can’t hide their excitement to watch the new cute scenes of Yoon Joo and Tae In. The audience’s hearts skips a beat whenever they see any of the LUNA members. Maybe, because they are real idol members in real life. The cast members come from kpop groups like U-Kiss, NU’EST, AB61X, and one of them is a solo artist. Also, even though only three episodes of the kdrama have been aired, the audience has already got second lead syndrome. Woo Yeon is so caring that it will be hard to not fall in love with his kindhearted and sweet nature. You can see, that the kdrama has a lot of aspects to enjoy while watching.

Where To Watch Let Me Be Your Knight Ep 4?

In Korea, Let Me Be Your KNight releases new episodes every Sunday at 11:05 PM. The k-series is available for the Korean audience on the SBS channel. Furthermore, the international audience can watch the kdrama on Rakuten Viki with a standard subscription. The series has been gaining rapid popularity due to its unique genre. Not many kdramas talk about the hard lives of celebrities and turn them into something interesting to watch. So, Let Me Be Your Knight must surely be on your watch list.

The last episode had ended on an alarming note. Fans were left anxious when Tae In started choking Yoon Joo when he was sleepwalking. Taking the preview of the next episode into consideration, fans think that the 4th episode of Let Me Be Your Knight will be about Tae In realizing that he has fallen in love with Yoon Joo. The audience’s heart fluttered from a scene sweet from the preview. Yoon Joo was listening to In Tae play the piano for her. It seems that their friendship will start to bloom in the upcoming episode.

Also, there will be some tension between Kim Shin and Cha Ji Yeon. As he has a very busy life, Kim Shin would have no time for dating anyone. And if he does, start dating Cha Ji Yeon, along with him Cha Ji Yeon will be targeted by malicious haters. Surely, fans can’t wait for the episode to come out!

‘Never Twice’ Review: Why You Must Watch this K-Drama?