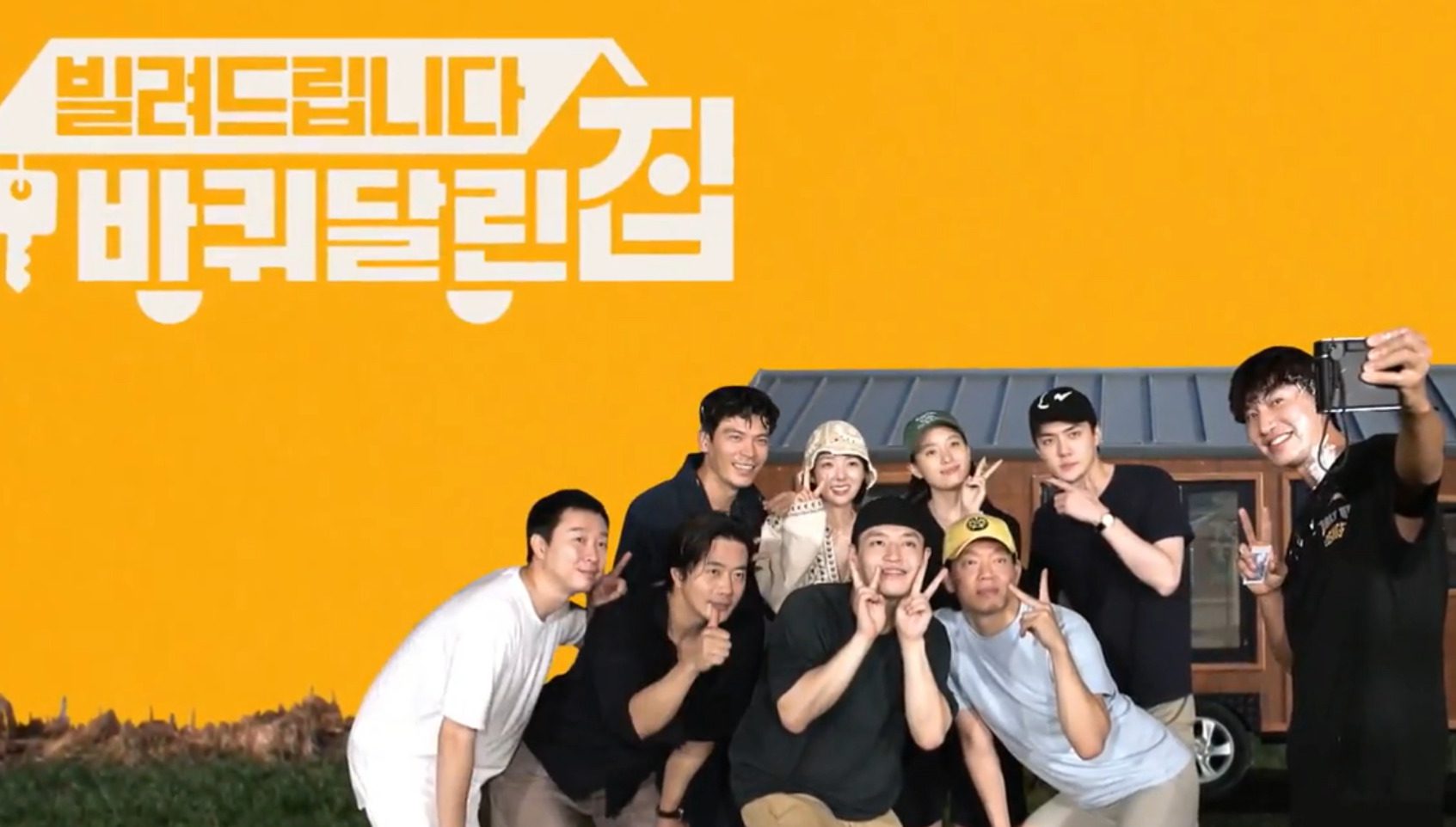 TvN’s “Lending You My House on Wheels” is back with another episode, bringing back our favorite star cast. A spin-off for the “House on Wheel”, led by Sung Dong Il and Kim Hee Won, where they take their moving house to beautiful destinations and live on-road. Waiting for episode 3 of “Lending You My House on Wheels”, here, the actors have given their house to the cast of the upcoming film “The Pirates 2″. The guests who took over the house in previous episodes were Lee Kwang Soo, Han Hyo Joo, and Kang Ha Neul. As they arrived chatting and laughing, they seemed very pleased with the weather.

Reaching the place where the “house on the wheels” was parked, they were shocked to find the empty ground there. As they move in to settle, they plan what they are going to make and the food. Talking about the things they bought with themselves. Looking around, they find a letter from the house owner, that said the guests must do everything themselves. From getting the water to taking care of the house as they go to sleep. The owner wants the guests to think about the environment and encourages them to be and to keep the surroundings clean.

A still from “Lending You My House on Wheels”

What Happened In Lending You My House on Wheels?

As they start to settle in and keep their stuff in, Ha Neul sees that Hyo Joo bought so much pork and they have a lot of side dishes. Except for kimchi and salted shrimps. Planning to make curry and kimchi, they all plan to visit the supermarket together. Taking a break, the three actors talk about their time on shooting sets. And how sad they felt after their projects were over. Planning to go to the nearby gazebo; Hyo Joo starts putting stuff on the shelf as Ha Neul and Kwang Soo wait for her outside. Coming back, they drive out to the department store to get groceries for lunch as their friends will be joining them.

Coming back, as Hyo Joo gets in to prepare lunch, Ha Neul and Kwang Soo stay out to prepare the tent outside. Unable to set it up by themselves, they call Don II and ask him for help. But even after many attempts, the three of them are unable to set the tent up. As time passes, their guests start arriving and the seats are not ready yet. The first ones to arrive are actors Kim Sung Ho and Park Ji Hwan. Ji Hwan being a professional camper helps Ha Neul to set the tent up. As the food was still getting ready, the men outside set the seats up and made some coffee. In the end, they finally made Soybean Noodles soup with boiled eggs, rice, and kimchi. 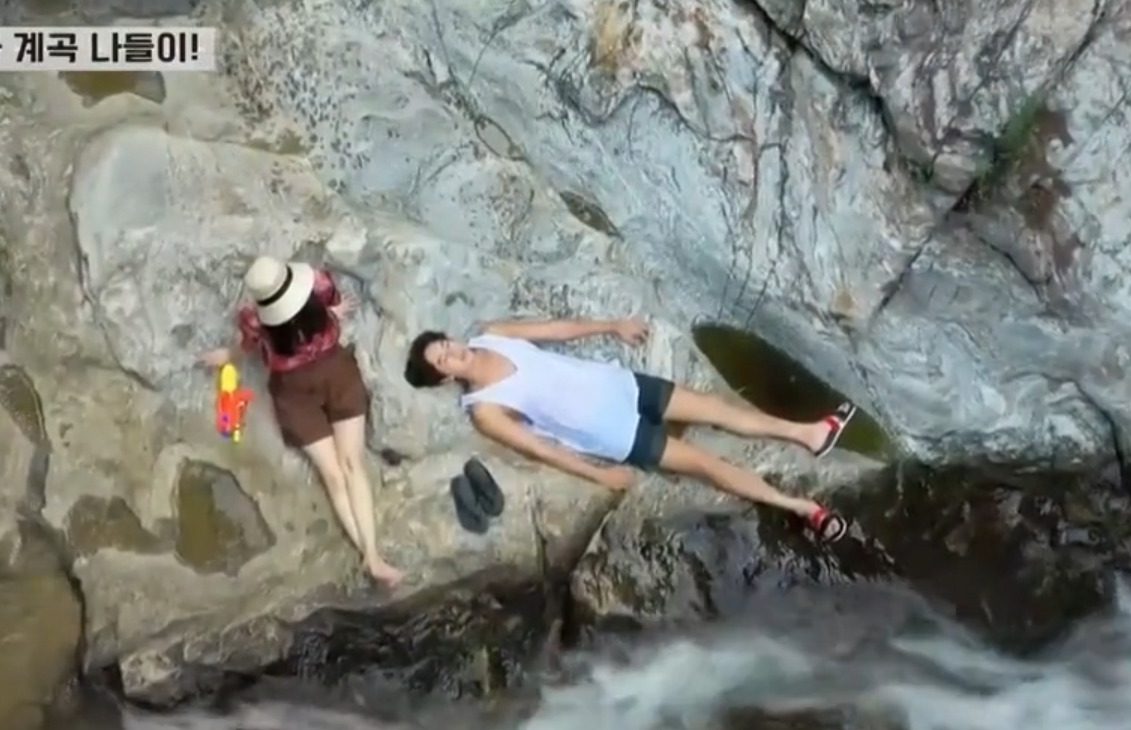 Where Did Everybody Go From The House On Wheels?

After eating and resting for a bit, they all went to see the steam nearby along with their stuff. But as all of the actors left for the cool place, some more guests arrived at the house. Chae Soo Bin and Oh Se Hun arrive at the empty house, followed by Kim Gi Du and Kwon Sang Woo. While others are having fun at the nearby stream, the newly arrived actors have taken over the moving house as if it’s their own.

Also Read: Reminiscence Filming Locations: Where Was The Movie Filmed?

Hyo Joo, Ha Neul, Ji Hwan, Sung Ho, and Kwang Soo are at steam having fun. Getting in the water, they are trying to catch fish and skipping stones in the water. Soon everybody starts showing off their throwing skills. Sung Ho is deep under the water and corners of the stream, looking for something “precious”. Sick of everybody making fun of him, Kwang Soo takes his water pistol out and starts shooting everybody, but falls in the water as he movies in. This led to was full-on water fight between the Ha Neul, Sung Ho, and him. Saying it’s been a while to be out in a place like this, Hyo Joo goes on to look around and finds a huge rock to lie down on.

While the men engage in a water pistol fight and tease her too. Kwang Soo joins her and lies down to enjoy the view and relax as Hyo Joo sits beside him. While Kwang Soo and Hyo Joo take a nap at the stone, Ji Hwan takes his big knife out to cut the peaches as he sits and talks with Sung Ho and Ha Neul. Sitting under a tree at the riverbank, Ji Hwang tells the other two men about his famous role in the gangster film. 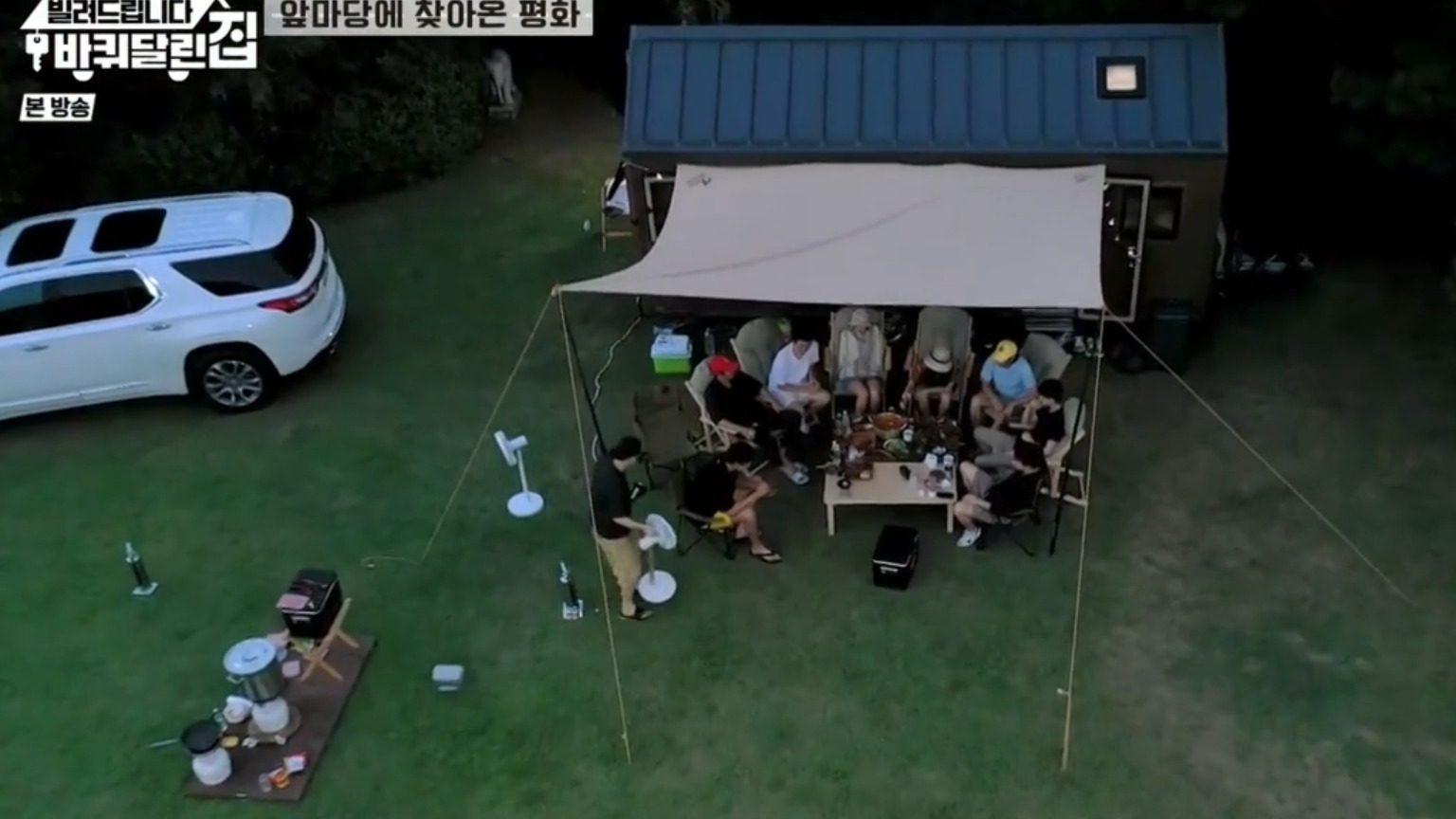 Back At The House on Wheels

Chae Soo Bin, Oh Sehun, Kim Gi Du, and Kwon Sang Woo look around the house and find no one around. They were supposed to meet at 9 pm but arrived early. Taking their stuff in, they too start settling in the house and getting things to eat. Gi Du reveals that he brought a big watermelon for everyone. Soo Bin and Sehun took over the kitchen to prepare food as all of them were starving. As they are sitting down, arrives the final guest (at least for now). And with that, they cut the watermelon and enjoy the fruit under the sun. Asking about the others, they decide to call Ha Neul. But he isn’t picking up, since all of them are busy messing around with each other at the steam.

Talking about what to make for lunch; Gi Du prepares the meat as Sehun chops the vegetables to put in the food. Making a dish out of kimchi, all of them gather around the pot in the garden; while two men from the team steer away from the boiling pot. While in the kitchen inside the moving house, Soo Bin along with another mate is preparing things to make tteokbokki. Fixing up another stove, they start cooking sticky rice cakes too. 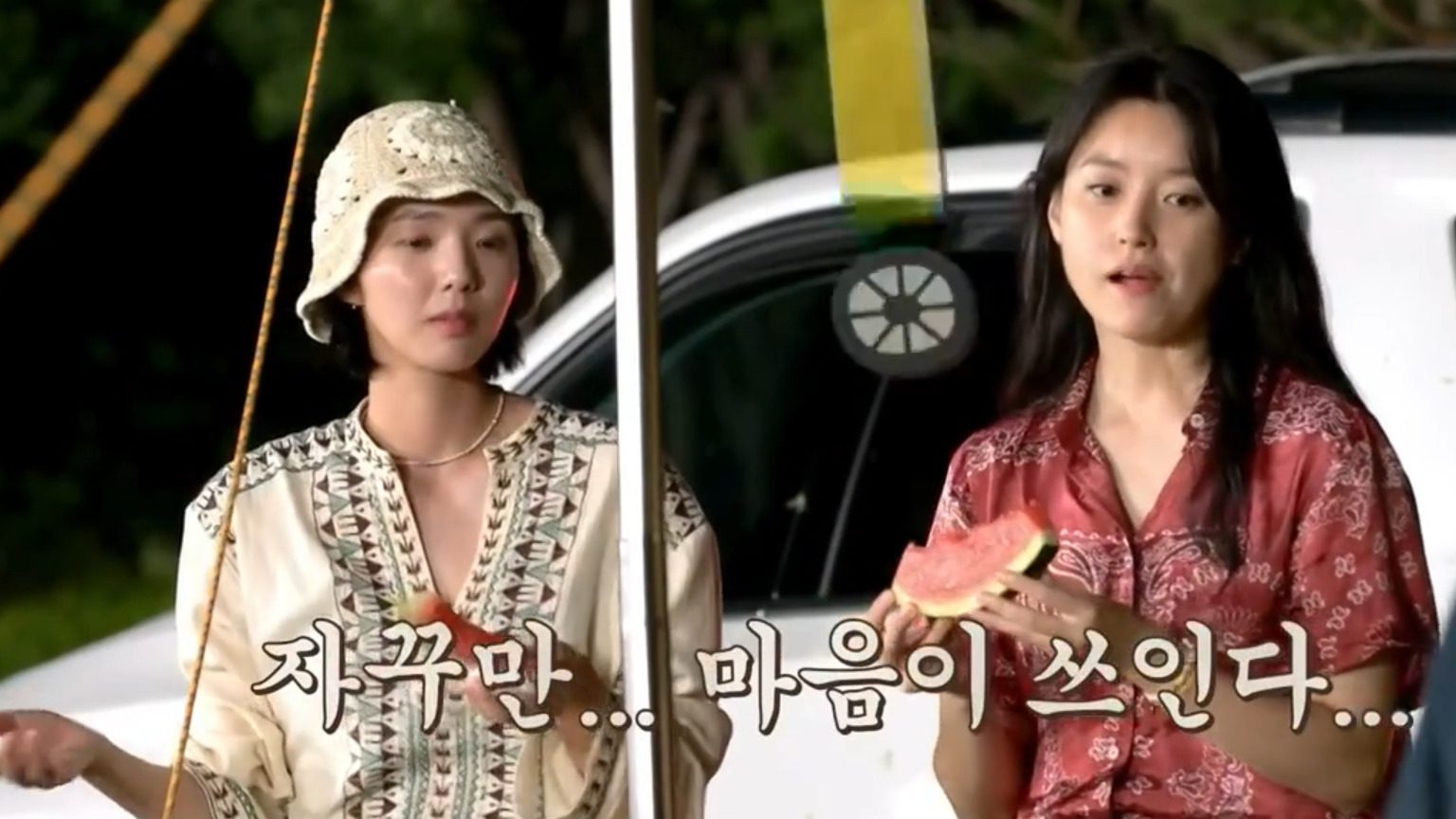 Moving Back To The House On Wheels

While back at the stream, the other early arrival actors are annoying peaches and chatting, and having fun. Out of nowhere, Hyo Joo asks Ha Neul to sing a song, and he sings beautifully. She asks him to sing again as Sung Ho is slicing up peaches and giving it to everyone. Finally, when they decide to check their phones, they see missed calls from fellow actors. Laughing their head off, listening to their voice mails, and talking to them on call. Knowing they have to return home, they take some pictures and get ready to drive back to the moving house.

As the car pulls by the moving house, Sehun recognizes the other half of the cast members. As they all get out of the car, they all reunite with hugs and high-fives. While everybody asks them where they were, they take a look at the food that has been cooking in the garden. While half of the members help hold up the water tub to fill the tank of the moving house, the chefs sitting near the food already start enjoying the delicious tteokbokki. Hyo Joo steps into the moving house and finds the whole kitchen filled with peals and stuff that messes around the bed and sofa. She also brought a gift for Soo Bin, her favorite set of books.

With the food ready to eat, the cast members sit around the moving house and start eating, as everybody praises the food. As the sun started to set, while some had their stomachs full, some were still eating. Finally, sitting down together, all of the actors talk about the moments they’ve made and have fun. As the moves on to episode 3 of “Lending You My House on Wheels”.

“Lending You My House on Wheels” Episode 3 Release Date

“Lending You My House on Wheels” Episode 3 will release on September 27, 2021. Being the final episode of the series, the cast members will be wrapping up their adventure after all the fun they’ve had there. They will once again sit together and chat about the ongoing life and things they have enjoyed so far in the movies. Before going back, there will also be a football match with the actors splitting into two teams.