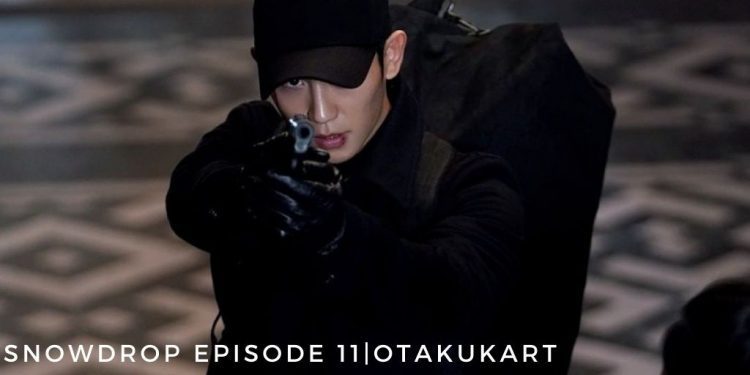 Snowdrop Episode 11 will soon be airing, and fans cannot wait. Will Kang Cheong Ya put Eun Young Ro in even more danger? Will Lim Soo Ho finally join hands with Lee Kang Moo to get to safety? So many questions that fans cannot wait to find the answer to. On the one hand, the hostages inside the dorm are barely surviving, and on the other hand, the higher-ups are scheming to win the elections and the money. But despite the countless greedy characters, there is one in particular that shines the brightest. Hong Ae Ra, Eun Chang Soo’s second wife, and Eun Young Ro’s stepmother amid all the chaos could only care about 13 virgins dying.

Probably the only character in Snowdrop who can beat Nam Tae Il’s record. Now that Kang Cheong Ya has finally pressed the bomb that will bring the whole dorm down, there are two key questions that fans are expecting Snowdrop Episode 11 to answer. Who will survive the bombing? Will the ANSP officers outside of the dorm also find out about Kang Cheong Ya’s identity? At this point, just like the hostages that are held captive, the audience is also wondering if there even is a way to get out?

What to Expect From Snowdrop Episode 11?

As we move towards the second half of this thrilling kdrama, fans have a lot of expectations. It seems like Kang Cheong Ya’s entry into the dorm is not the only big entry that she has made. With Nam Tae Il’s wife mentioning that Kang Cheong Ya is single, she is waiting for the man who saved her life in Germany. And Kang Cheong Ya also getting a flashback of Lim Soo Ho and her on one stormy night in Germany; fans smell a love triangle coming up. But this is not going to be a normal love triangle because Kang Cheong Ya has the power to destroy both Lim Soo Ho and, of course, Eun Young Ro.

Another hint of a blooming romance comes from the people we expected the least. The short-tempered Commander Joo, who is either yelling or beating someone up every time he’s on-screen, and Kye Boon Ok, who could not care less about anyone else but herself, are becoming soft for each other. Despite all the heartwarming romances building up inside the dorm, the tension between the South and North is making no move of easing up anytime soon. Fans are wondering if Lim Soo Ho’s father has actually betrayed him or is this just another one of his plans. Find out in Snowdrop Episode 11.

This thrilling and highly anticipated kdrama premiered on the 18th of December. Additionally, Snowdrop Episode 11 will be released on the 16th of January. The series stars some of the most popular faces in South Korea, such as Blackpink’s Jisoo, Jung Hae In (Something In The Rain), Jang Seung Jo (The Good Detective), Yoo In Na (Touch Your Heart), Kim Hye Yoon (Sky Castle), Yoon Se Ah (Sky Castle), and Jung Eugene (Romance Is A Bonus Book). Furthermore, Snowdrop airs a new and exciting episode every Saturday and Sunday of the week. The cast of Snowdrop never fails to make our hearts skip a beat with their phenomenal acting talent. So do not miss out on Snowdrop Episode 11.

The South Korean romance thriller, Snowdrop, starring Jisoo and Jung Hae In is originally broadcast on JTBC. Additionally, Snowdrop has taken up the 10:30 pm time slot according to Korean Standard Time. For international viewers, the timings are 8:30 pm in the United States, 8:30 am in Canada, 12:30 am in Australia, 1:30 pm in the United Kingdom, and 7:00 pm in India. For viewers who want to stream the drama online, Disney+ releases the latest episodes of Snowdrop with subtitles in various languages.

Additionally, Snowdrop is Disney+’s first exclusive South Korean release and is the first among many more to come. Unfortunately, Snowdrop is available on Disney+ only in countries such as Indonesia, Malaysia, Hong Kong, New Zealand, Australia, and South Korea. Make sure you do not miss out on Snowdrop Episode 11.

Where Is Judge Steve Harvey Filmed? All About The Show And Filming Location!