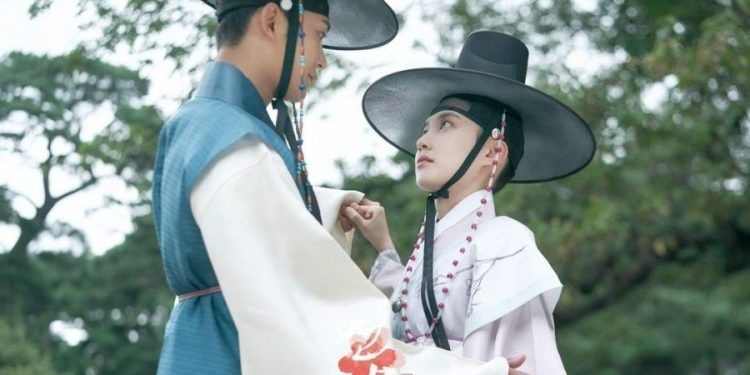 The King’s Affection Episode 16 will decide what Lee Hwi’s fate is. Ever since the beginning, fans speculated that Lee Hwi’s secret would be exposed. And as we move towards the end of this drama, Lee Hwi’s secret is in jeopardy every second of the show. With the growing tension between him and Lord Songheon and his relationship with Jung Ji Woon, fans are always on edge. Furthermore, even under such tough circumstances, The King’s Affection manages to be humorous and light-hearted. It is heartwarming to see the people who keep their life at risk just to protect Da Mi’s identity.

From Jung Ji Woon, who loved her even when he did not know she was a woman, to Lee Hyun, who prioritized her safety before his feelings. And lastly, his bodyguard, Kim Ga On, who did not mind that a woman was sitting on the throne of Joseon. This drama has broken so many stereotypes from the onset that fans are always amazed. But how long will these guardian angels be able to protect Da Mi? And what will happen to Jung Ji Woon after her identity is revealed? In this article, we will be telling you all that you need to know about The King’s Affection Episode 16.

This beautiful sageuk (historical kdramas) consists of a total of twenty episodes. The King’s Affection Episode 16 will release on the 30th of November, which falls on a Tuesday. At the beginning of the series, Lee Hwi was a young crown prince. He was someone who never raised his voice in fear that his identity would be revealed. As we reach the 16th episode, we have seen him evolve into someone who uses his caliber and voice to help the weak. The talented creators of the show, Song Hyun Wook (The Beauty Inside) and the screenwriter Han Hee Jung (Clean With A Passion For Now), have left no room for complaints in this drama. Everything from the dialogues to the plot and intentions of the characters is splendidly carried out.

Now that Lee Hwi has become the King, the entire palace is waiting for him to produce an heir. Will this be the thread to expose Lee Hwi’s secret? Will Noh Ha Kyung be the one to reveal Lee Hwi’s identity?  Make sure you do not miss out on The King’s Affection Episode 16 to see what new twist is the story going to take.

Where to Watch The King’s Affection Episode 16?

This popular kdrama is officially broadcast on KBS2. Furthermore, The King’s Affection Episode 16 will be airing on KBS2 at 21:30, according to Korean Standard Time. Which is 6:00 pm in India, 7:30 am in America, 12:30 pm in the UK, 11:30 pm in Australia, and 7:30 am in Toronto, Canada. Furthermore, Jung Ji Woon’s father is getting closer to discovering Lee Hwi’s secret.

He has always mentioned how he saw Da Mi in the crown prince because he was tasked to kill her. But now that he has witnessed his son kissing the Crown Prince, fans are wondering what is Jung Seok Jo’s next move. The good news for international viewers is that The King’s Affection is also released on Netflix. Now fans can watch the latest episodes right after their release with subtitles of their choice on Netflix. So do not miss out!

How Will Lee Hwi’s Identity Be Exposed? Fan’s Predictions

Although it is very clear that Lee Hwi’s identity will be revealed, fans just cannot figure out how this is going to happen. Furthermore, fans are speculating that it will be Jung Ji Woon’s father who will end up exposing Lee Hwi. He showed no mercy when he was tasked to kill her the very first time. And there are more chances that he will try to assassinate Lee Hwi. With just four more episodes remaining, the audiences are racking their brains to find answers. They are trying to figure out what kind of an ending will The King’s Affection have. Moreover, it will be too far-fetched to assume that the palace will not give a brutal punishment to Lee Hwi if they find his secret. Make sure to watch The King’s Affection Episode 16 to see what destiny has in store for Lee Hwi.