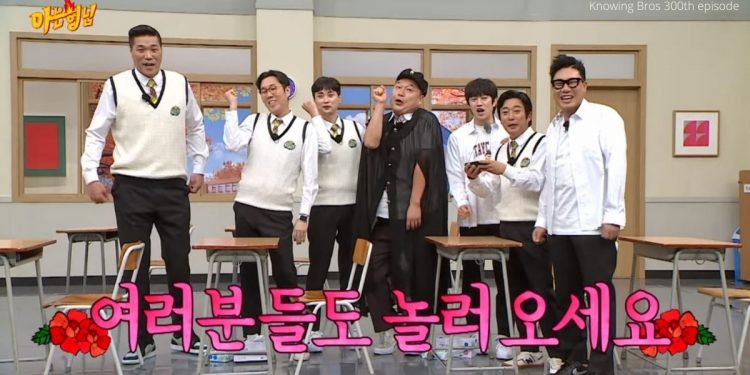 The ‘Knowing Bros’ has made a significant mark on the reality show category with completing the 300th episode. For the celebration, the cast has invited Lee Chan-Won, Young-Tak, Donghae, and Eunhyuk. Lee Chan-Won and Young-Tak are trot singers whereas, Donghae and Eunhyuk are part of ‘Super juniors’. Before this, the guests have made appearances on the 100th and 200th episodes of ‘Knowing Bros’. In ‘Knowing Bros’ Season 6 Episode 40, we will see the guests continue with the fun on the show.

The South Korean reality show is one of the longest-running shows in the history of television. Before the recent guests’ many famous idols like Blackpink, BTS, and Twice have appeared on the show as transfer students. In the previous episode, the ‘Knowing Bros’ counts on Cha-Won and Young-Tak as they are the HVRF of the show. The singers come bearing gifts on the special occasion and surprise everyone with their talent and strengths.

As per the Korean release date schedule ‘Knowing Bros’ Season 6 Episode 40 is the 300th episode of the show. And this marks a milestone in the history of variety shows. The ‘knowing Bros’ cast has invited Lee Chan-Won, Young-Tak, Donghae, and Eunhyuk to celebrate this milestone with them. The episode starts with the cast enjoying the recreation of their classroom as 3D animation. The class is an exact replica and the characters could dance with steps of famous songs like ‘Dumb Dumb’.

The stars of ‘Super juniors’ enter the classroom singing a congratulation song for the ‘Knowing Bros’ cast. Also, on this special occasion, the ‘Super juniors’ star brings HVRF with them. The HVRF is nothing but the highest viewer rating guests Cha-Won and Young-Tak. The MOAM members give Chan-Won and Young-Tak awards to honor them for their appearance on the show. However, the MOAM members are planning to receive a gift from Donghae and Eunhyuk. As from Eunhyuk, the cast members ask for the one Pyeong dance. At first, the idol focuses on the vibe without using the space but later he makes smooth moves all around.

Chan-Won Is A Keyboard Player

Both the teams give ‘Knowing Bros’ gifts in the form of performances. Lee Chan-Won and Young-Tak perform a song whereas, Donghae and Eunhyuk perform a complete dance with hip-hop moves. After this, the cast remembers that Chan-Won is also a talented piano player. For the 300th episode, the idol showcases his guitar skills and plays the song ‘On Saturday Night’. Moving to a fun point everyone makes Donghae and Eunhyuk portray their skills on the guitar even though the idols are not well versed with instruments. Still, Donghae gives his best with a melodious version of the song ‘It’s The Read Deal’.

In the ‘Knowing Bros’ Season 6 Episode 40, the team will continue to have fun with Lee Chan-Won, Young-Tak, Donghae, and Eunhyuk. In the upcoming episode, the guests will play games like find the hidden brother in which the cast members will be hiding behind curtains and the idols will have to identify which MOAM student is behind which curtain. Also, the episode will include many segments of singing and dancing. So make sure to catch part 2 of the ‘Knowing Bros’ 300th episode celebration.

The ‘Knowing Bros’ Season 6 Episode 40 release date is 28th December 2021. The idols are asked to perform based on the strengths that they have mentioned in their application form. However, Young-Tak has the most unique strength. The trot singer’s strength is his table tennis skills. And for the final activity, all the members join in for a match of table tennis.

Who are Matt and Abby from Tiktok? What is the Couple Famous For?