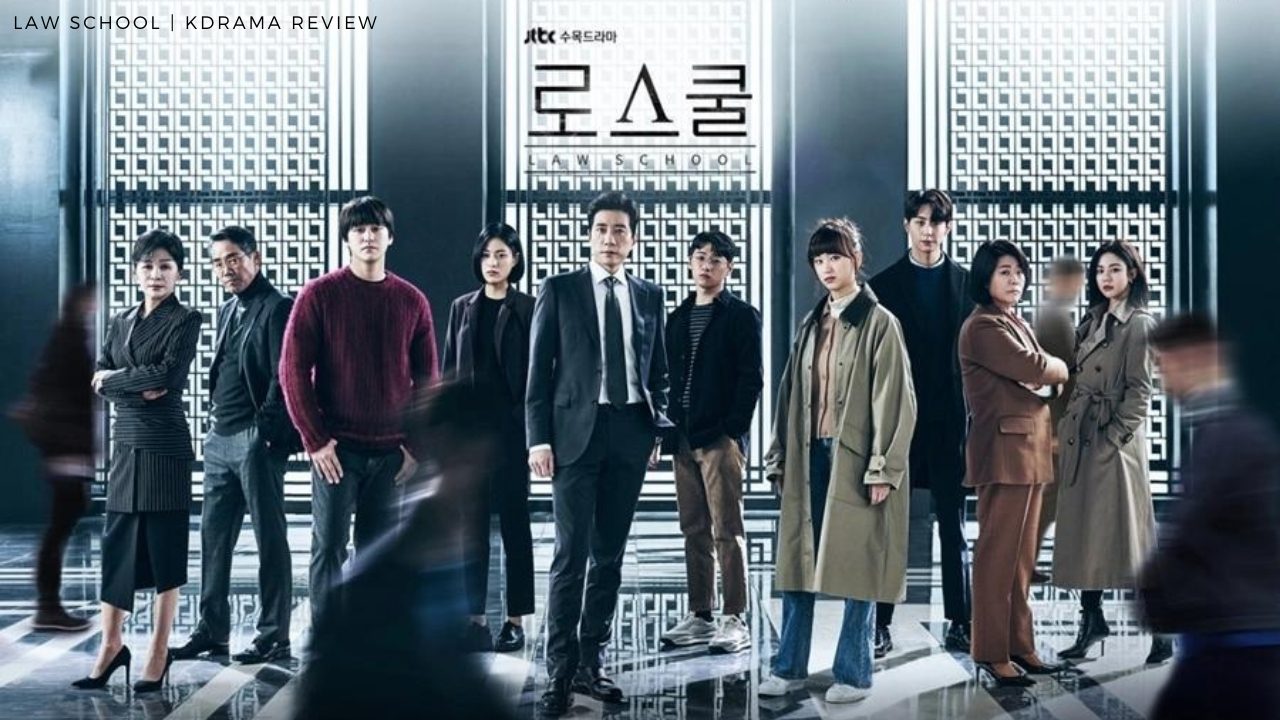 Law School or 로스쿨 in Korean is a South Korean cable television network drama. Furthermore, fans were blessed with this intriguing series in the April of 2021. The drama aired its final episode on the 9th of June. As you may have guessed by the name, Law School is a legal drama. It is one of the most popular dramas that was aired this year. Many kdrama fanatics believe that Law School was truly a cultural reset. Without the over the top main couple, love triangles, and the main protagonist, this drama pulls you in purely through its storytelling and mystery. Moreover, many of the fans that have watched this drama are still hoping for a season 2. While we wait and hope for a season 2, here is a review of the famous kdrama Law School.

This drama is structured around the students of the prestigious Hankuk Law University. Furthermore, all the topmost law students study at this university. When a professor is found dead at the university, Hankuk University gets surrounded by a fog of suspicion. Furthermore, as the case unfolds, the prime suspect of the murder emerges to be the strict, only business professor at the law school, i.e., Professor Yang Jong Hoon. This unsettling case gets Professor Yang’s determined students to put their knowledge in law to the test.

Get To Know The Characters

Law School would not have been this iconic if it was not for its amazing characters. Each and every character is spectacularly written by the amazing writer Seo In. Furthermore, Law School does not make us look at any character through the lenses of ”Good or Bad” glasses. As the episodes go by, we are enlightened with the back story of most of the characters. Moreover, the cast of this drama is so well chosen that it is hard to imagine them as someone else. That’s how you know that the cast has done an amazing job. Here is a brief introduction to the main characters so that you can get an idea of what Law School kdrama is about.

Starting with Yang Jong Hoon, who is a criminal law professor at Hankuk Law University. He used to be an unforgiving prosecutor. He is tough, straightforward, and does not give an inch. His character is played by the talented Kim Myung Min. Kim Myung Min is popularly known as the Myung Min Bon Joa, which means the true actin guru in the Korean language, and rightfully so. Professor Yang Jong Hoon is so intimidating that you will shiver through the screens. Although he does not have a likable personality, he will become your favorite character. Furthermore, his dedication to teaching his students the true meaning of law and justice is proved when he uses his own case as a learning experience.

Coming up next is Kang Sol A. She is a first-year student at Hankuk Law School. Kang Sol A’s character became the representative of students all around the world. Easily one of the most relatable characters in the kdrama Law School. Furthermore, Kang Sol A entered Hankuk Law University through the special admissions policy. In an institution where the most genius students of Korea go, she struggles both academically and financially. Although she herself is struggling, she cannot bear to see anyone else struggling. My take on Kang Sol A’s character is that she was actually one of the smartest students. But because of her inability to say no to anyone who needed help, she struggled academically. Furthermore, Kang Sol A’s character is played by the amazing Ryu Hye Young. Her chemistry with a fellow student, Han Joon Hwi, has a cult-like following.

Next is Han Joon Hwi. Han Joon Hwi is the genius of this kdrama. He is a first-year law school student who also cleared the judicial services exam in his very first attempt. Not only is he a genius, but he also has a very easy-going and caring personality. Furthermore, Han Joon Hwi is an orphan and was raised by his uncle Seo Byung Joo. This lovely character is played by the very popular Boys Over Flowers actor Kim Bum. Although amidst all the chaos, Han Joon Hwi and Kang Sol A’s relationship could not become official, his eyes did all the talking.

Lastly, the awesome Professor Kim Eun Sook. Furthermore, Kim Eun Sook teaches civil law at the university. In a university filled with grim professors, she is a breath of fresh air. She has shown genuine love for her students times and times again. Although she is a total fluffball, she is the toughest person in the courtroom. She gave many people in the audience serious trust issues. Also, she is the only one who has managed to be Yang Jong Hoon’s friend. This is quite a big deal as most people are intimidated by Yang Jong Hoon’s presence and aura.

Why Law School Is A Must-Watch Kdrama

The mystery and storytelling of this kdrama are unbeatable. Furthermore, this drama does not allow you to skip even a second of it. It has gained the approval of millions around the world, thanks to Netflix. The OST (Original Soundtrack) of this drama does not lie when it goes ”Driving me crazy, taking me under”. You will find yourself unable to stop yourself from clicking on the ‘Next Episode’ button. The series consists of a total of sixteen unmissable episodes with a duration of 1 hour 5 minutes. Here, we will list down a few reasons as to why this drama is a must-watch.

The hook line of the drama is the murder of Professor Seo Byung Joo inside the campus premise. His dubious murder becomes a high-profile case that turns the students and professors of the prestigious Hankuk Law School into murder suspects. Moreover, this drama has done an expert job at storytelling. It does not simply show the events leading to murder, the murder mystery is solved through the viewpoint of each character. Furthermore, while watching this drama, you will find yourself questioning each and everything. Just when you think you know something, the tables are turned. Letting the viewers figure out who s responsible rather than just showing it is a peak point of this drama. Moreover, fans really loved the use of puzzle pieces to create a parallel between reality.

The Backstory of Characters

Each character of this drama was beautifully layered. You could never guess what they would do and whose side will they be on. Furthermore, the backstory of each character is what impressed fans. This drama gives you a peek into each character’s life that helps you to get to know them better. Through the stories, you will find yourself relating to one if not all the characters of this show. The motivation of Kang Sol A to get into Law School because she had been treated unfairly, Han Joon Hwi’s determination to prove that everyone is under the law, and Jeon Ye Seul’s journey to self-respect are the highlight of this drama. Many people who have been in an abusive relationship can relate to Jeon Ye Seul. The audience had loved how she was able to prove herself in the ending of the drama.