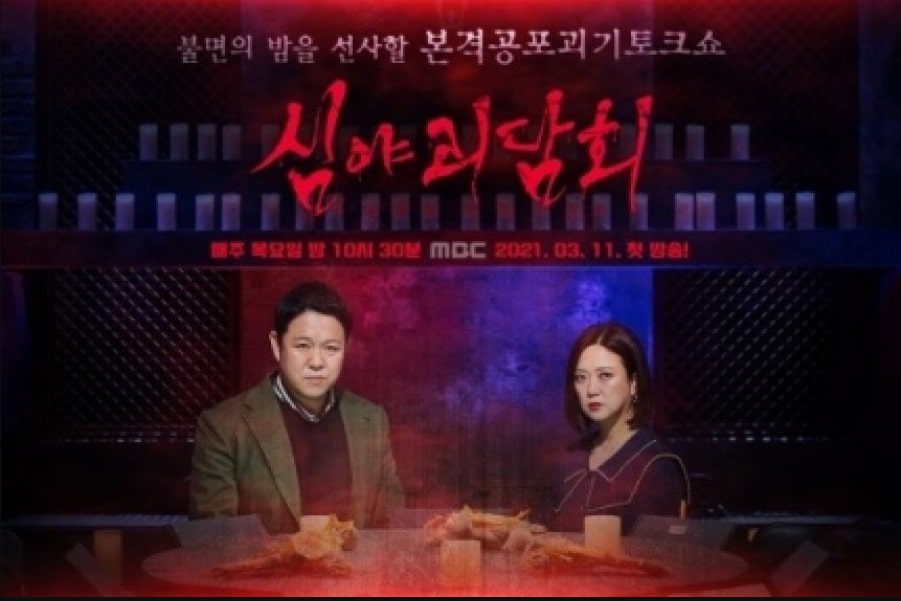 In the mood to hear some true horror stories but too chicken to do it alone? The “Late Night Ghost Talk” is the perfect show for the mood. The talk show gathers some amazing names from the South Korean industry and puts them in a room. They talk about true creep and ghost stories accompanied by an audience through a video call. Kim Gu Ra hosts the show along with Kim Sook, Hwang Je Sung, Heo An Ha, along with a few other guests accompanying them. In episode 25 of Late Night Ghost Talk, actress Kim Yeong Son accompanied the hosts.

The theme of episode 25 of Late Night Ghost Talk was “Dangerous Woman”. Starting the show with the first story of the night to set up the vibe of the studio and the live audience, the host began with the story titled “What a dangerous woman can do?” The story followed a woman in her 20s named Hong Soo Yong, a college student who has recently joined a broadcasting company as a journalist. She came from a rich family, had a nice boyfriend, and was enjoying her life. 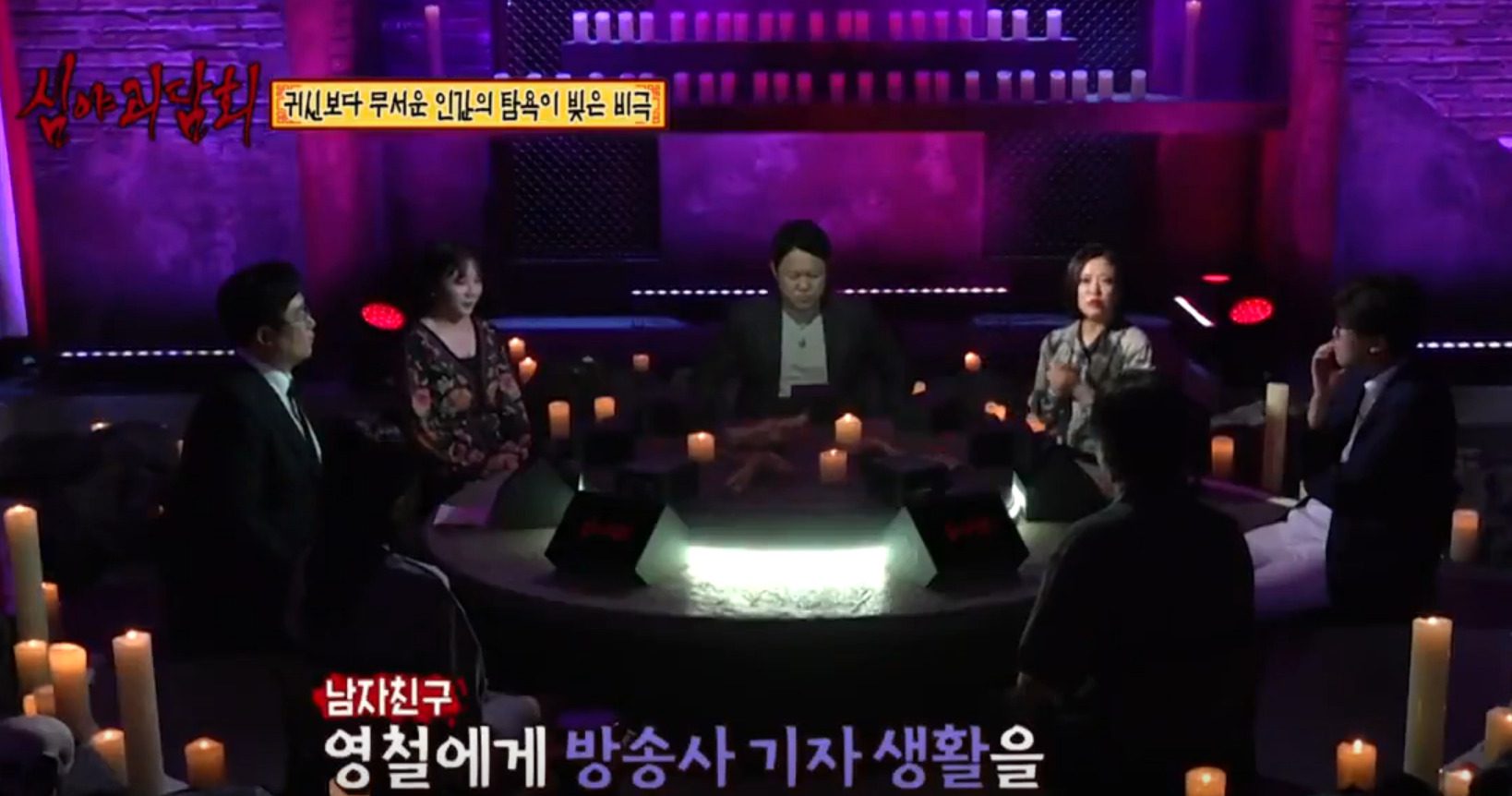 The Set-up: “What a dangerous woman can do?”

One day her boyfriend got called in by police to be in custody for kidnapping a 6-year-old kid. As he told her that he doesn’t even know the kid and tried to leave, the detective told him that his girlfriend told the team that he has the kid. As soon as he tells them that he hasn’t met his girlfriend in a while as she is busy with work, they tell him that his girlfriend is not at work and doesn’t even go to the university they met at. On being asked if there were any problems between them, he reveals that his mother didn’t approve of her as she didn’t believe she worked for a broadcasting company. As the police started looking into the case the real identity of Soo Yong comes out.

Soo Yong wasn’t actually the woman she showed she was. Trying to get into the university, she failed her exam twice. One day she found a lost college ID on her way home and changed the photo with hers. She spent the college fees that her parents gave her on her friends, teachers, and boyfriend. She planned to marry her boyfriend so she could ‘leave her job’. But to marry him she had to show that his mother that she has money in her hands. 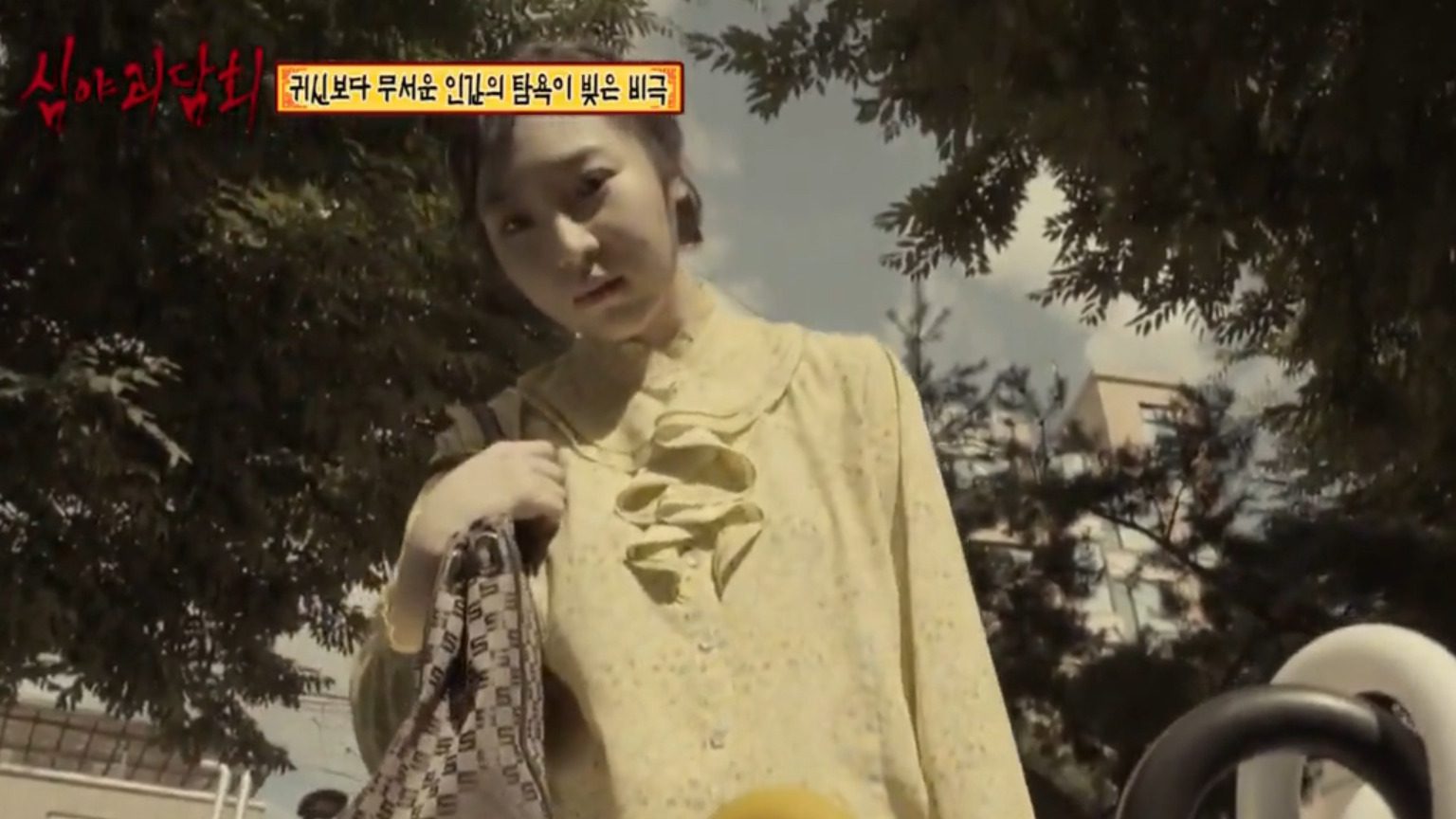 Soo Yong decides to earn money by kidnapping a kid. She picks a 6-year-old kid from her school and holds her captive. Calling up her parents she asks for $50k so she can get herself an apartment and marry her boyfriend. But it doesn’t happen as the team of detectives catches up to her four days later. She tells them that her boyfriend has the kid and he’ll meet her at the subway station. As soon as she reaches the station with the detective, she jumps on the tracks to kill herself. But they saved her right away.

After being hospitalized and able to testify, she reveals that her boyfriend has nothing to do with it. Talking about the kid, she revealed that she killed the child and hid her in the water tank room of the university so she wouldn’t be found. In her trial, Soo Yong accepted her crimes and asked for a death sentence, which she was granted.

The Next Segment Of Late Night Ghost Talk Episode 25

Being crept by the story and how Soo Yong could hurt an innocent child, the hosts move to another segment of the show. The next segment is where two teams will tell the story and the story gets the most candles to win. The two stories chosen by the live audience were “Dangerous Invitation” and “A Handwritten Letter from Haeundae” Moving on to the first story, the host began 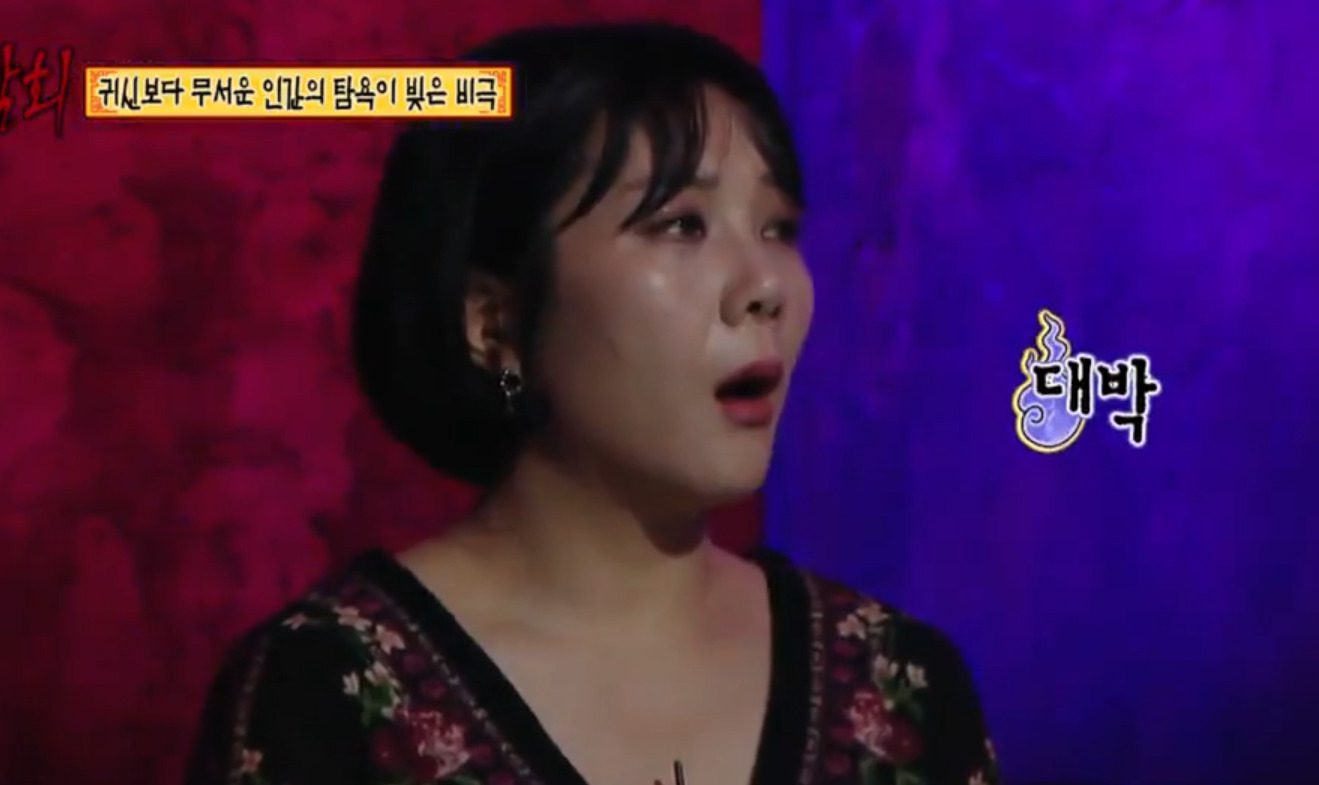 Sent by Anna, the story belongs to a man named Hyun Tae. The incident actually happened with his father when he was 8 years old. In the small town he lived in, there was a barren mountain. The natives used to call it the Rocky Mountain. It was popular for robberies and ghost stories at night. One night when his father was coming home late from the office, his father had to pass the mountain by walking to reach the house. On his way, he heard some woman crying. Looking around and going in the direction of the sound, he found a woman sitting on the ground. Telling her to go home, she shows him that she’s stuck between the stems. Helping her removes the stems around her feet and tells her to go. Later on, as he reaches his own him, he finds the woman behind him.

She enters his house asking for food. As her wife sets food for him, she sees him talking to himself and all of a sudden falling down. He becomes sick and on the verge of dying. A shaman comes in and tells her that a woman is stuck to him. After performing the ritual, the spirit decides to leave but not without taking her revenge. The spirit belonged to a young girl named Kyung Hwa. 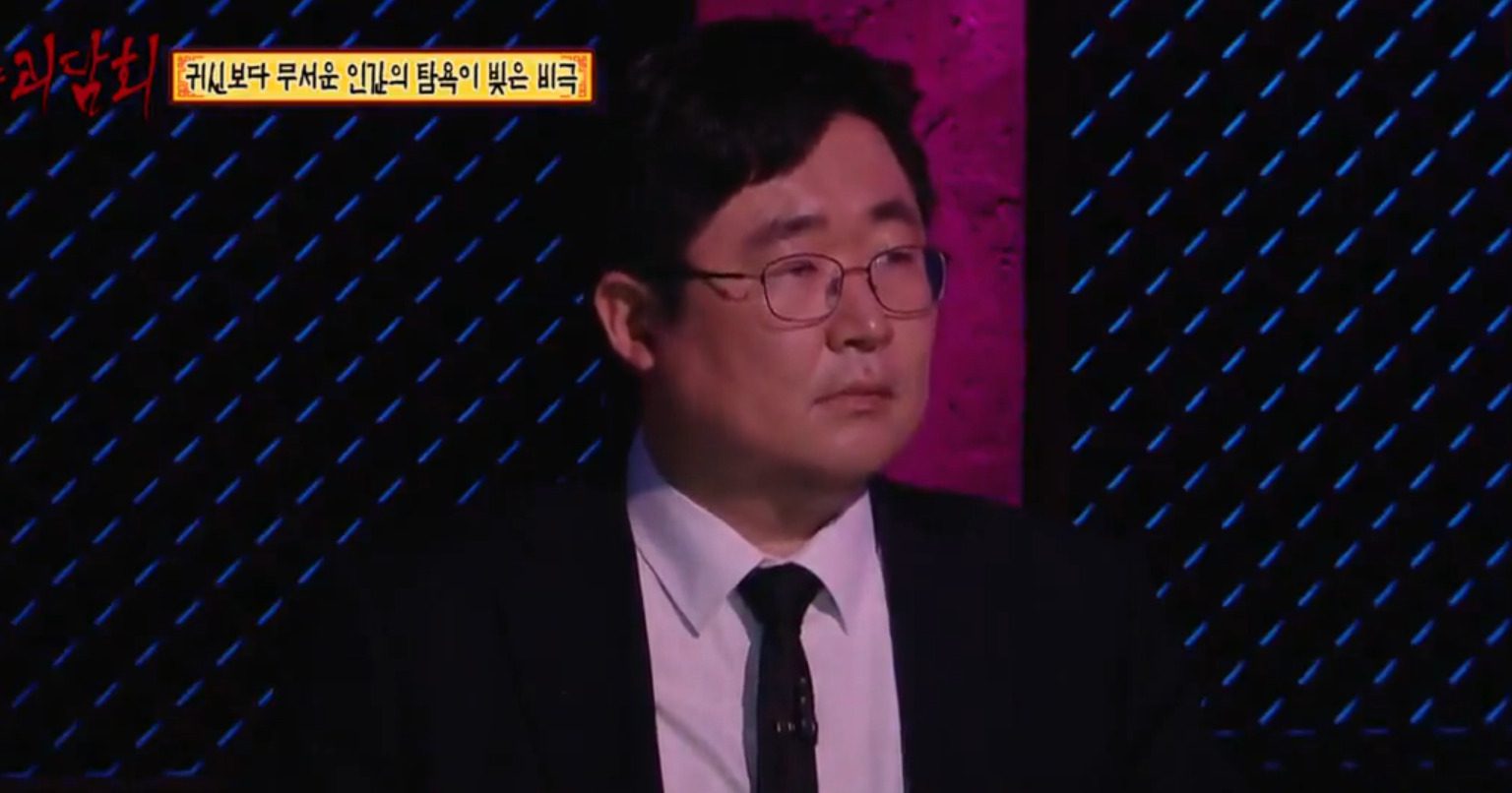 Who Was Kyung Hwa?

A few years ago, she disappeared from the town. After people went looking for her, they found her dead with torn clothes and a pesticide bottle in her hand. When she was coming back from a get-together at night, three men grabbed her in the mountain, raped her, and left her there to die. As she left the body of Hyun Tae’s father, she went on to get her revenge. One of the three men was dead with a pesticide bottle in his hand. The other one tripped from the mountain around the same place. The third man was in the police custody confessing the crime the trio had committed and how the spirit is going to kill him too.

Also Read: bugAboo Releases New Teaser: Know All About Them

A Handwritten Letter from Haeundae

Narrated by our special guest, the next story was actually handwritten and parceled to the studios. Telling the story, it followed Ju Hyun, a daughter of a rich family. Her family got a big order from a constructer and got two apartments as payment. One apartment got sold while another one was rented by an older couple. But as the old woman died, her husband moved out of the apartment. Soon Ju Hyun moved into the apartment with her family. While moving in she saw some of the stuff that the old man left. She kept it inside thinking he’d come back for the stuff. As she lived in the house, strange things happened there. Water dripping or her daughter hearing her cry. 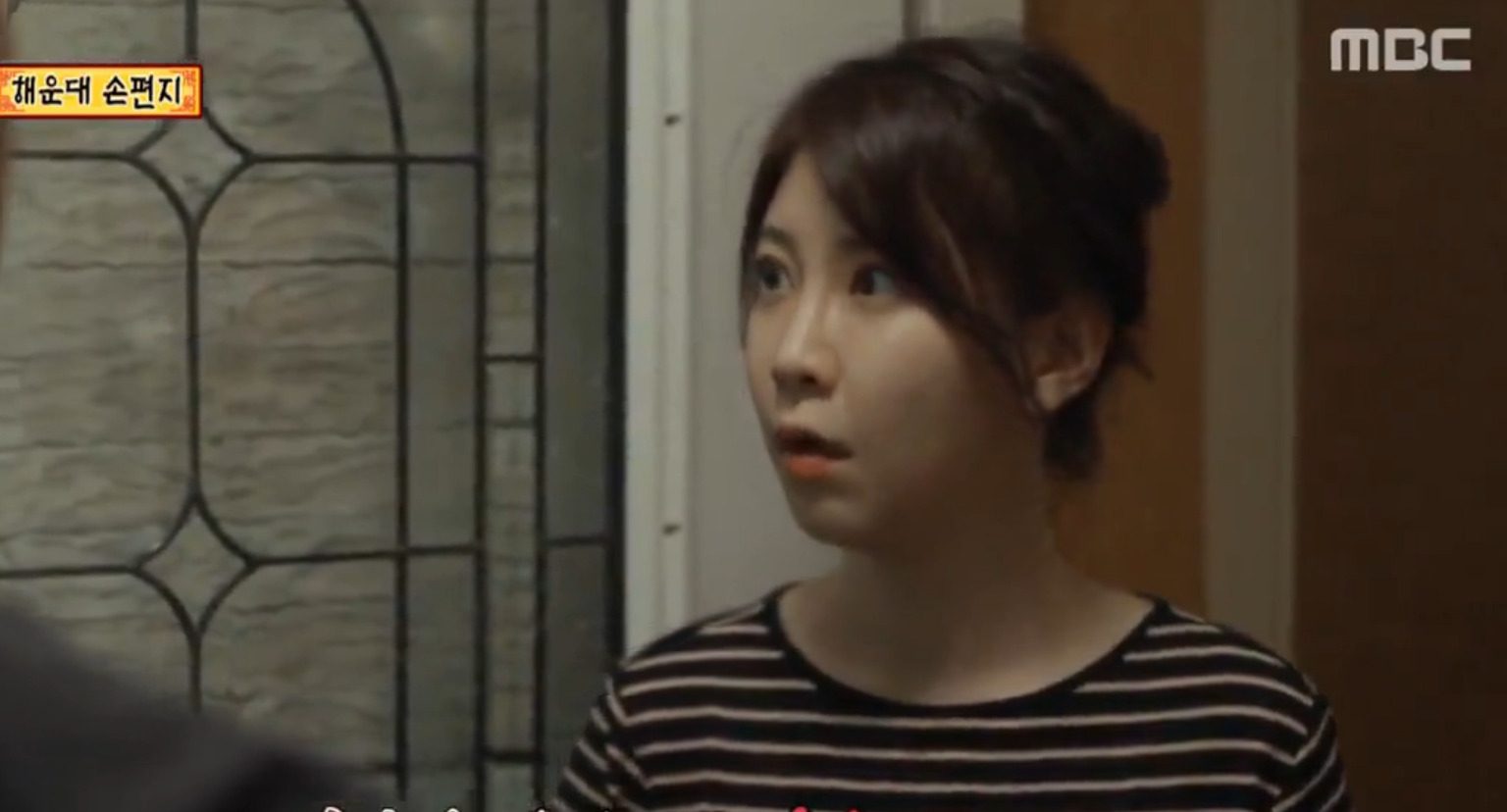 What’s Wrong With The House?

One day, as she stepped out of the shower, she heard water dripping. As she looked back, she found a woman dripping in water coming towards her. She passed out and woke up in her bed with the woman above her. She told her not to leave the house. Calling her husband back home, she begged him to move out. He brought a monk home to help the spirit out. The monk captured the spirit in a talisman and told her to burn it. He told Ju Hyun that she only left because she was afraid and told her to stay at the house.

A few days later police knock at the door, looking for the old tenant. They found his daughter’s dead body in the ocean. She shows them stuff he had left behind. Looking at the stuff, she finds out the ghost belongs to the daughter of the previous tenant. Ju Hyun moved out as soon as she could. After moving out her company went bankrupt and went through a lot of misfortunate events. 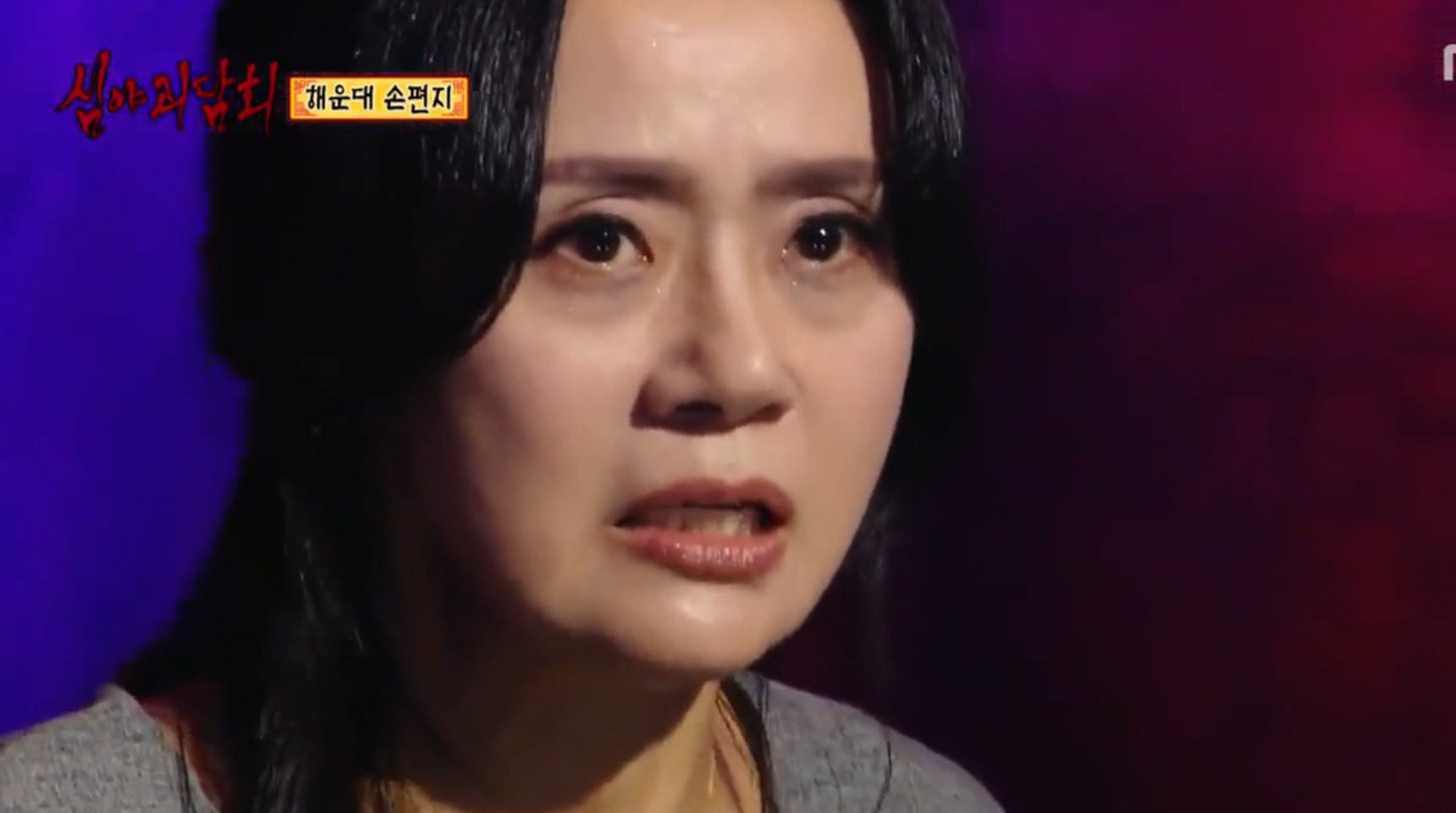 Who Won The Game & When Is The Next Episode Coming of Late Night Ghost Talk?

The live audience was the one to vote as they listen to the stories through the video call. The first story “Dangerous Invitation” got a total of 22 candles from the audience. While the second story “A Handwritten Letter from Haeundae” got a total of 40 candles. Concluding that the guest Kim Yeong Son won episode 25 of the Late Night Ghost Talk. With the person sending the story winning an $844 cash prize. They also talked about similar stories and heard the recordings and saw the pictures that people sent related to the stories. Episode 26 will premiere on September 10, 2021, with a new guest and a new theme on MBC.

Also Read: Lovers Of The Red Sky: The Cast Of The K-drama