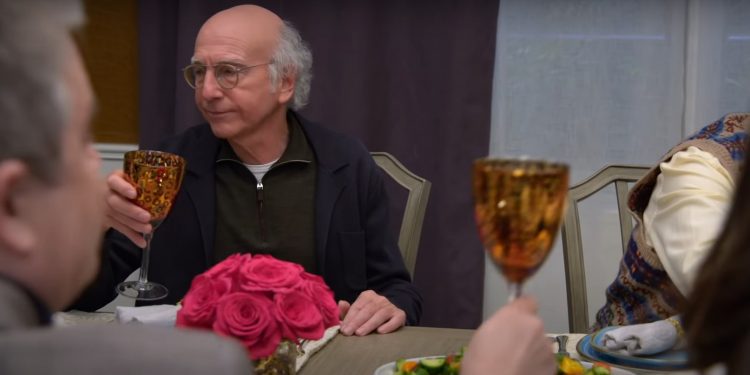 Larry David’s constant bickerings are the essential point of this show. For the Seinfeld former executive producer, the program managed to pick up quite an audience. And in this new installment of Curb Your Enthusiasm Season 11 Episode 7, only God knows what the man is capable of bicker now. Just last week he went into a full-on fight with Seth Rogen in an airport and somehow managed to come up as a sexist, Jewish Hollywood elitist he portrays in his show impeccably over a luggage fuss.

You gotta give it to Larry David when it comes to acting, the man really knows how to put up a rant. Not only can he manage to make everybody look profoundly uncomfortable. But he can make you try to reach in from the screen to smack the old guy in some sense. As you will read from our recap, the man managed to irritate a humble limo driver by hurling some of his luggage. Funny and frustrating, this is Curb Your Enthusiasm’s latest episode here at Otakukart.

Curb Yout Enthusiasm season 11 episode 7 will release on December 5, 2021, at 10:30 PM, Eastern Time, United States on HBO and HBO Max. Firstly, this episode’s title is “Irma Kostroski”. Secondly, it is directed by Jeff Schaffer out of a script by Larry David, Nathaniel Stein, and Jeff Schaffer. Thirdly, each episode drops on a consistent weekly basis and we will have episodes all through the month until December 26.

Where to watch Curb Your Enthusiasm?

The best place to watch Curb Your Enthusiasm is HBO. Firstly, the show is an HBO production. Consequently, the program airs on Sundays. Now, if you missed it, you can stream it via HBO Max. Furthermore, this platform is one of the newer ones in the streaming wars battles. But it’s got plenty of shows to offer, an essential subscription gets you all the HBO original programs like Game of Thrones, The Sopranos, The Wire, and Hacks, plus all the original films and its vast catalog of movies.

“Man Fights Tiny Woman,” the fifth episode of the 11th season, begins with Jeff and Larry returning from New York to resume casting their tv show which is on the verge of landing Seth Rogen in a significant role. But when they arrive at the lower level of the airport, they discover Larry’s driver is a small stature woman. He doesn’t want to give her his carry-on bag and then refuses to let her grab his luggage out from the baggage carousel, despite her protests. Later on, Larry is fatigued as he comes home after injuring his back and tries to haul all of his bags to the van.

Larry decides to file a complaint with the limo rental and asks that they send a guy the next time they toss a car. The woman on the receiving end of the line says that their female drivers could do everything their male drivers do, to which Larry answers, “I’m sure they can, but I just don’t want a woman carrying my stuff.” It’s simply not a good look.”

The girl says he seems a touch sexist, which causes Larry to go on a rant on how non-sexist he is, which the woman on the other end of the line misunderstands as Larry wanting to have sex with the chauffeur. Larry finally gives up after much haggling and agrees it’s OK if they send a female employee the next time. Meanwhile, Jonas, the constructor, arrives to check on a leak in Larry’s guest room. Larry is worried when Jonas, a hefty man, says he’s going up on the roof by climbing a ladder, so he calls Leon to come to check it all out. Jonas then climbs up to Larry’s top, where Larry and Leon find cracks in their ceiling.

Larry goes to the chiropractor and realizes that he is the only one in the waiting room. The chiropractor, played by Josh Gad, discloses that Larry has a back strain and when he stretches up to grab a foam roller for Larry’s back, his shirt comes up, and Larry notices that the chiropractor’s underwear is entirely ragged and full of holes. Larry later explains it to Jeff as “like the underwear went to combat.”

The episode also shows that Larry’s new program is finally taking shape, and when he and Jeff visit the set, they discover that the production has recreated Larry’s childhood home, where he resided from the age of eight to twenty-five. They also find that one of the cast members, Jason Steinberg, is a Jew for Jesus who is unwilling to work beyond 4:00 p.m. on Thursdays. This provides Larry, Jeff, and Freddy with lunchtime fuel as they amusingly investigate Jewish conversion to Christianity.

While dining, Larry inquires about the time, only to learn that his vehicle is in a tow-away zone. He had told Freddy to contact him when the clock struck two. But Freddy forgot, and therefore Larry’s car is no longer present. Back at home, the roofer comes and offers to repair all roof tiles, but this would take many days. Larry and Leon hear cracking and breaking above them as Jonas walks up on the roof.

Larry realizes he needs to leave the house but lacks transportation, so he reluctantly contacts the car service earlier in the episode. Again, the same woman comes to pick him up, but this time he agrees with the car company’s request and lets her take his luggage, which she does with ease. Larry returns to the chiropractor and finds the same ripped underwear. Larry, being Larry, is unable to remain silent this time. “I saw your underwear is really tattered,” Larry tells his chiropractor.

He argues that the chiropractor’s underwear is frayed, which explains why he doesn’t have any patients. Gad’s character is taken aback by the criticism and seems to have no idea how a human being should dress. Larry answers, “These aren’t even for emergencies,” when asked whether he should save the tattered pair “for emergencies.” You throw ’em out. A heroin addict does not keep the needles.” Larry then says he’ll assist the chiropractor. After that he writes an email that the doctor would send to all of his patients, apologizing for his filthy underwear.

Larry is then dropped off on the studio lot where Seth Rogen, in negotiations for a role in Larry’s program, is shooting a movie as a Viking. Rogen witnesses Larry allowing this petite lady to carry all his things across the parking lot amid the action. Rogen’s discussion comes to a halt as he is taken aback by what he is experiencing. Larry explains that the car company prefers that she carry the bags rather than him. “You can’t disrespect the auto manufacturer,” Rogen quips sarcastically on the deck of a bogus Viking ship.

Larry goes to the set

When Larry arrives at his stage, a few cast members approach him and say that Jason Steinberg, the Jew for Jesus cast member, is proselytizing to the group during rehearsals, interfering with their process. Larry says he’ll handle it and chooses to challenge Jason by fact-checking the Virgin Mary’s birth of Jesus Christ. Jason agrees to cease proselytizing, and Larry refers him to his chiropractor when he complains about his back.

Later on the set, Larry runs into Seth Rogen, who confronts him over allowing the lady to carry his luggage. “Do you have a child lugging your sh-t around?” Rogen inquires. Larry claims that the car business instructed him to let her handle his baggage, but he acknowledges that “there are certain things that I would prefer a male doing to a woman,” which Rogen tells him not to utter.

Larry continues, and Rogen responds, “Larry, please stop naming vocations and which sexes should and shouldn’t do them!” After that, Larry understands the message and departs, but not before underlining how firmly he believes in his position. “We don’t know each other very well. You’ve said 30 ridiculous things to me already,” Rogen adds as Larry walks away, capping off one of the season’s funniest sequences so far.

Larry goes to Freddy’s house and stays while the roofer works on his house. But after an argument, Freddy won’t let him have the last Perrier (an oh-so-Larry-David quarrel), Larry leaves to return home. When the car service girl arrives to pick him up, Larry becomes agitated and tries to wrestle her baggage. They both end up on the ground, and a bystander films the physical battle. Which Rogen later watches and vows, “I’m never working with that dude again.” Consequently, Larry David’s casting woes continue. As another one slips through the cracks, after conflicts with Dylan O’Brien and Woody Harrelson in previous episodes.

Also Read: The Beatles: Get Back Season 1 Episode 4: Is There Something More Legendary?

Back at home, in Larry’s upstairs bedroom, Leon observes his cell phone cord flying out the window and onto the roof, which is being used by the roofer. When Leon pulls the cable, the roofer follows it and falls through the ceiling onto Larry’s bed. This is functioning as the punchline to the comedy built up by the roofing storyline. When Larry returns to the chiropractor, he is relieved to learn that the office is filled with people. However, Larry is then angered when the chiropractor starts spewing the Bible after already being evangelized by Larry’s Jews for Jesus cast member. “Oh f—k,” Larry shouts as the credits begin to roll.