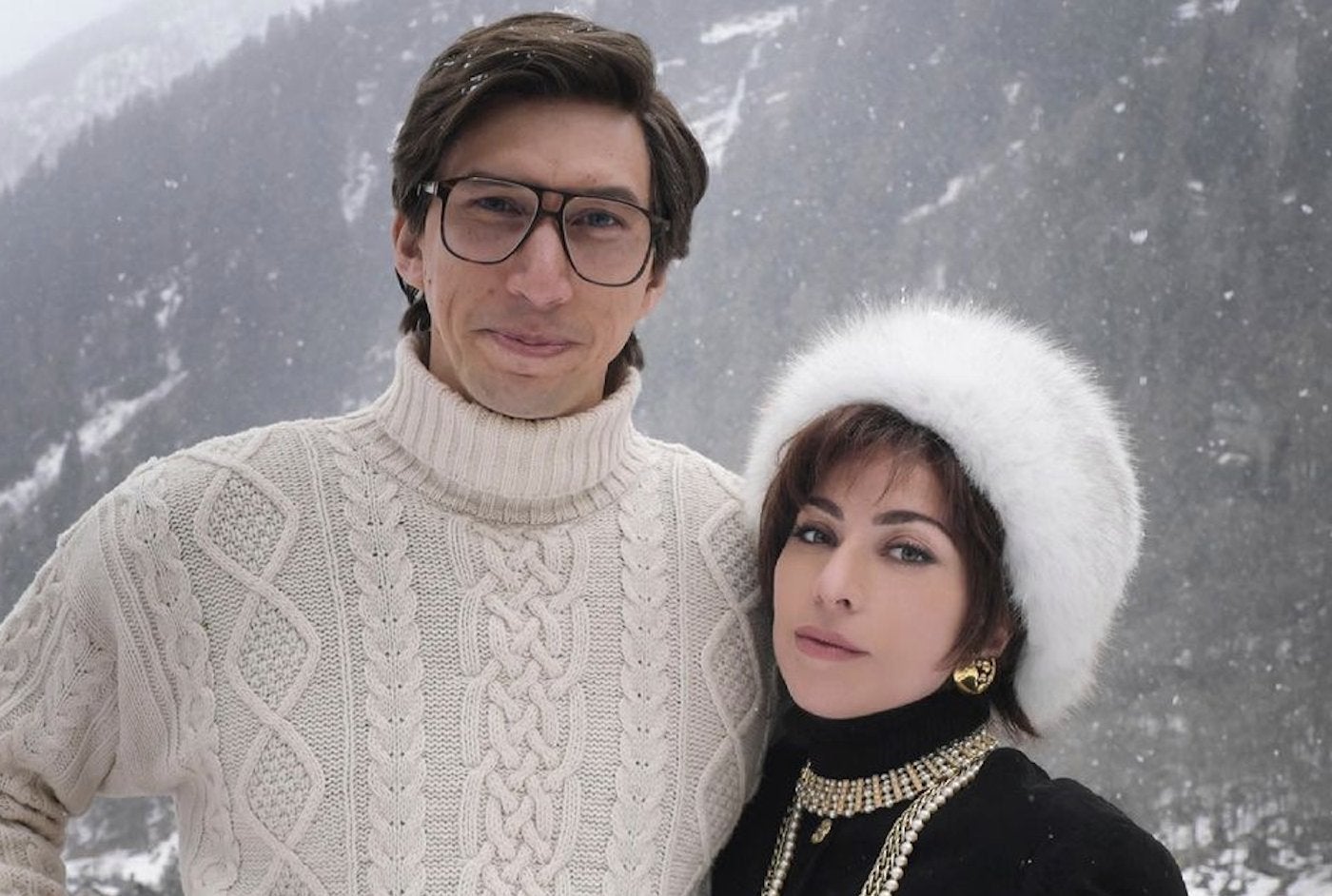 The film ‘House of Gucci’ has finally released the first few scenes photos. A few photographs arose on the internet about the on-set situation of the new movie ‘The House of Gucci’.  Apart from that, Lady Gaga, as the main character of the film, also expressed her excitement for the film by posing with her co-star, Adam Driver. Lady Gaga is entirely transformed for the movie. A New York woman to an Italian girl, Patrizia Reggiani, the ex-wife of Maurizio Gucci for her upcoming film. The first photo of the House of Gucci film uploaded by Lady Gaga shows herself and actor Adam Driver. They wore 90s era costumes and underwent the process of filming in Europe. As reported by Variety, Wednesday,  Lady Gaga shared a photo showing herself posing with Driver with a snow-covered mountain back screen. Gaga shared the photograph on her social media. By now, the picture has over 4.1 million likes on Instagram.

In the photo caption, Gaga gave the title “Signore e Signora Gucci” or “Mr. and Mrs. Gucci”. The driver wears a knit turtleneck sweater and a separate white jacket around his waist, while Gaga wears a gold chain necklace and an all-black outfit with a white Cossack hat. The film House of Gucci starring Lady Gaga and Adam Driver as a couple behind the ‘Gucci’ fashion line. Gaga played the rich socialite woman while the husband’s role ran to the American actor Adam Driver, who was previously known as the opposite of Scarlett Johansson in the drama ‘Marriage Story’.

Lady Gaga plays Patrizia Reggiani Martinelli, and Adam Driver plays Gucci. Maurizio Gucci is the former leader of the Gucci fashion business and the grandson of the founder of Gucci. The founder of Gucci is Guccio Giovanbattista Giacinto Dario Maria Gucci and died in 1953. The House of Gucci will show Patrizia’s behavior, who was the culprit of her husband’s murder in 1995. She is suspected of having committed the act because of Maurizio’s affair. The incident occurred nearly two years after the grandson of Guccio Gucci sold his shares for $ 170 million. 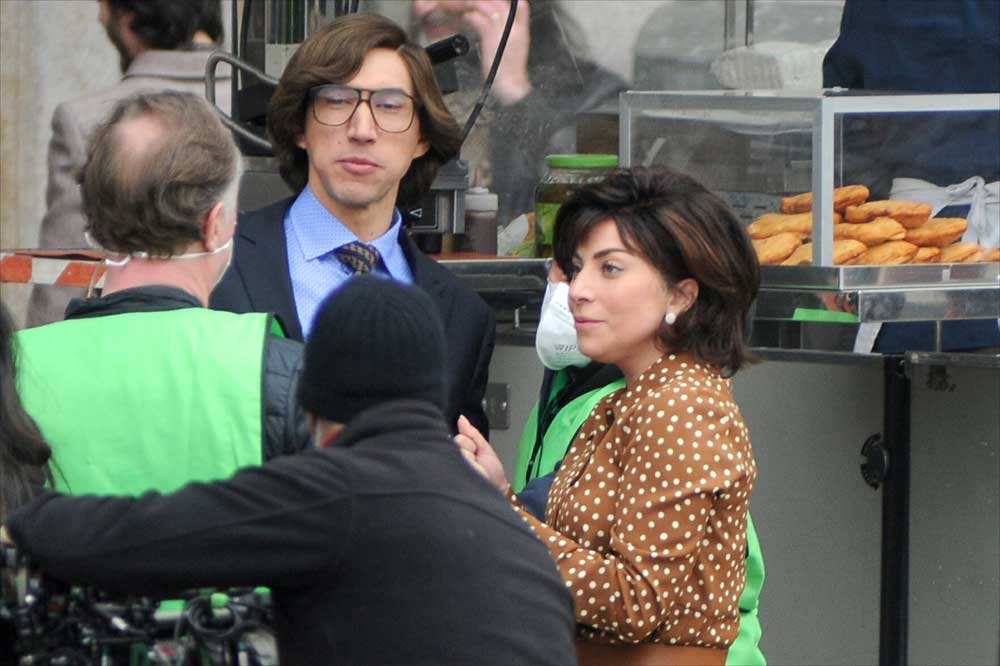 Bombshell cast for ‘The House of Gucci’

Aside from Gaga and Driver, this film also stars other well-known Hollywood actors, namely Al Pacino, Jared Leto, and Jeremy Irons, Jack Huston, and Reeve Carney. Jared Leto will play Paolo Gucci, Al Pacino as Aldo Gucci. As we know, Al Pacino is a Hollywood living legend who starred in famous films such as ‘The Godfather’ trilogy. Jared Leto, who played Joker in the DC’s ‘The Suicide Squad’, also makes an appearance in this movie. This is Leto’s first movie appearance since his years-long vacuum. Leto previously won an Oscar in his role in ‘Dallas Buyer’s Club”.

What is the movie about?

“House of Gucci” depicts the true story of the fall of the Gucci family dynasty. The film involves Adam Driver as Maurizio Gucci, the former head of the Gucci fashion house. Ridley Scott will act as the director based on the script by Roberto Bentivegna. Apart from the director, Scott also acts as a producer with his wife, Giannina Scott, and Kevin J. Walsh. Ridley Scott is also famous for his film ‘Blade Runner’ and also ‘Alien’.

The film, which s taking place in Europe, dramatizes the events surrounding the murder of Guccio Gucci’s grandson, Maurizio. Patrizia Reggiani was tried and convicted of orchestrating the murder of Maurizio Gucci in 1995 after he left her for a younger woman. 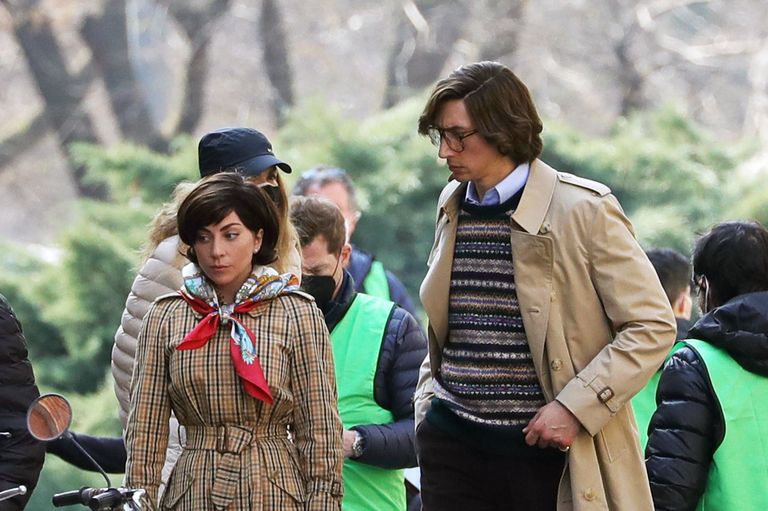 The film is based on a true story.

This news made several international media reports again about the story of Patrizia, who was the mastermind behind the murder of Maurizio in March 1995. The 72-year-old woman was sentenced to 26 years in prison for admitting that she hired a hitman to kill her ex-husband. Patrizia herself was released in 2014 after serving 16 years of detention. According to the Daily Mail report, Patrizia paid approximately 300 thousand euros (according to today’s exchange rate) to hire a hired sniper service. The New York Times reported that Patrizia admitted to her actions in 1998. Since then, the entire nation of Italy has nicknamed Patrizia as ‘The Black Widow’.

Patrizia and Maurizio themselves married in 1973. Both have two daughters, Allegra and Alessandra. Killed her ex-husband out of jealousy. Maurizio Gucci’s murder was not without reason. In May 1985, after 12 years of marriage, Maurizio was leaving Patrizia to be with another woman. Maurizio told Patrizia that he was going on a business trip. But he never returned home and in 1991, the two officially divorced. 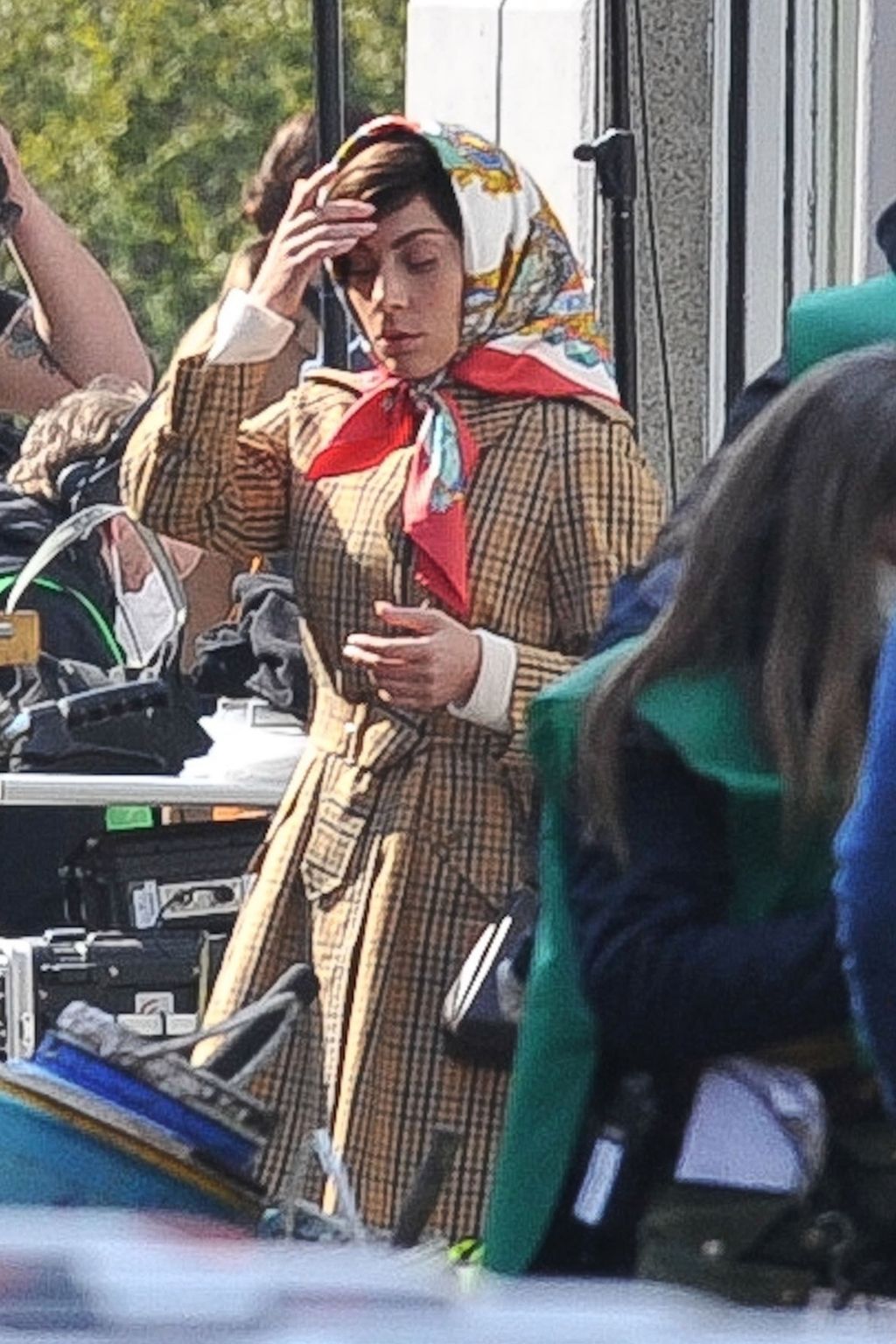 The motive behind the murder

The Italian socialite was furious and frustrated with the way Maurizio used his wealth. Not only that, but Patrizia also wanted a larger amount of divorce money. The Guardian said that previously authorities offered 2.5 million pounds sterling and an annual fee of 650 thousand pounds sterling. But she did not accept it and asked for at least US $ 1 million per year. Patrizia also said that she was apprehensive that her children would feel unsafe not to inherit if Maurizio decided to marry again.

Patrizia was very angry with Maurizio, but she felt like she couldn’t do the crime herself. She then found someone who was willing to become a hired gun for Patrizia. The hitman is Benedetto Ceraulo, a pizza shop owner who is in debt. Benedetto managed to shoot Maurizio on the steps of his office just as he arrived.

For two years, the police could not solve the Maurizio murder case because there was no evidence. This case then found a bright spot, and finally, in 1997, Patrizia went to jail along with four other people, including Benedetto. The contract shooter was later sentenced to life imprisonment.

“House of Gucci” marks Gaga’s first film after her Oscar-nominated performance in “A Star Is Born” in 2019. In Bradley’s version of the film, A Star is Born received positive reviews from fans and film critics. IMDb scored an 8/10 rating, while Rotten Tomatoes scored 79 from the audience and 90 from film critics. A Star is Born the story of Jackson Maine (Bradley Cooper), a country musician whose career is fading.

Meanwhile, Driver has received Academy Award nominations for ‘BlacKkKlansman’ and ‘Marriage Story’ alongside the Marvel franchise star Scarlett Johansson, from which he got sensational acclaim and recognition from.

The script is based on the book version.

Roberto Bentivegna wrote “House of Gucci”, based on Sara Gay Forden’s 2000 book about the famous case “The House of Gucci: A Sensational Story of Murder, Madness, Glamor, and Greed”. “House of Gucci” is produced by Metro Goldwyn Mayer. It is going to hit theaters around the globe in November this year, if possible.

I look forward to Adam Driver’s latest acting, which was previously popular in the Star Wars franchise and the Marriage Story film. On the other hand, Lady Gaga amazed all of us in her film ‘A Star is Born’ until she won an Oscar for Best soundtrack while snatched nomination for her acting performance.

The character Patrizia who is the wife of Maurizio, will be the center of the story of this film. She is the mastermind behind the murder of her husband, who is the boss of the fashion brand Gucci. 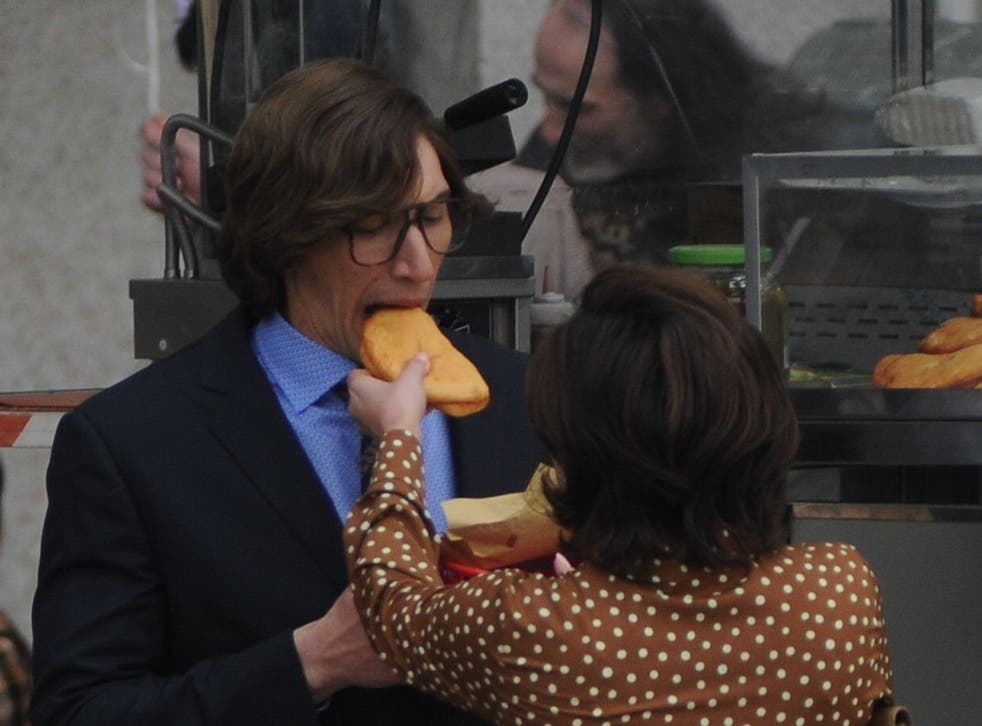 Metro Goldwyn Mayer as the producer company of the film

Metro Goldyn Mayer is taking the license and controlling the production of the film. Previously, Metro Goldyn Mayer also produced Lady Gaga’s latest release film ‘A Star is Born’ in 2018. MGM also has a big upcoming release named ‘Bond 25’, another sequel of the James Bond franchise, which was supposed to air back in 2020.

MGM chose Lady Gaga as their final candidate to play the lead in the biopic film in April 2020. Fans of Gaga were hysterical when the news spread on.

The MGM production house announced that Gucci would air on November 24, 2021. However, the release date is still unsure the same or not considering the coronavirus pandemic.

Also read: The World to Come Review: A Painful Yet Self-Exploration Love Story.