Kyung Joon listens to his parents conversation and finds out about Gwang Nam and Hee Ok's affair. Also, So Ri gets an ultimatum from her father to close Twist. 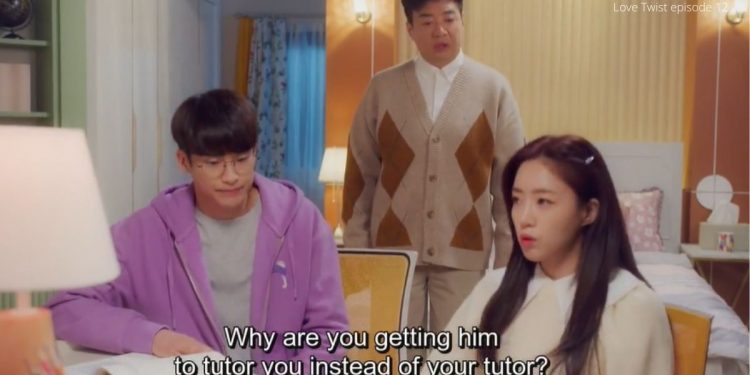 After a meeting, Gwang Nam is ready to get back home. As his new driver, Kyung Joon wants to make sure he pleases his boss. To do so he tells him about So Ri and Ha Ru running a business together. This makes Gwang Nam furious as he has never been fond of Ha Ru. The ‘Love Twist’ Episode 12 starts with Gwang Nam slapping Ha Ru for lying to him about his job. He has been deceiving everyone for years saying that he works for a cola company.

Gwang Nam gives him the warning to stay away from So Ri. Later at home, he does not tell anyone about this. Also, he advises Kyung Joon to keep it a secret. Adding to his stress Ok Hee tells him that she saw the man Hee Ok is dating. All of these things contribute to his cranky behavior the next morning. Will the upcoming episode decide the future of the Twist company?

Till now we have seen that So Ri is still not ready to give up on her company. The next day when she arrives at the office she sees Yoon-ah selling the company’s clothes. Watching this sight she becomes enraged and collects the clothes from the buyers. Also, now that the decision to shut down twist has been made, So Ri decides to put all the inventories at her house. Not only So Ri but Ha Ru is also very sad about closing down the company. He has an amazing opportunity to work in Silicon Valley but he is going forth and back on his decision.

Later, as he is standing on the porch of his house thinking about what to do, Gwang Nam visits him. To Ha Ru’s surprise, Gwang Nam slaps him out of nowhere. This is because he finds out through Kyung Joon that So Ri is involved with Ha Ru. Gwang Nam was very hurt to see that the boy he has raised at his house deceived him about his job. Also, he never wants Ha Ru to get involved with his daughter. Although when the truth comes out the situation becomes extremely complicated.

After the intense argument, Ha Ru is shredded into pieces finding out that Gwang Nam hates him. After he leaves he keeps thinking what is the reason behind this. Is it because Ha Ru does not have a father or is it because he has nothing as his mother abandoned him. Later at home, Gwang Nam tells Ok Hee about the job he assigned to Kyung Joon. Even she knows if Mi Ja finds out about this she will be very upset. However, the conversation turns in a new direction when Ok Hee tells her husband that she saw Hee Ok’s man.

The ‘Love Twist’ Episode 12 release date is 28th December 2021. Kyung Joon listens to his parents talking about Gwang Nam having an affair at night. He is shocked to know that the person he has known since childhood is having an affair with his auntie Hee Ok. Also, he finds out that Hee Ok used him as leverage to prevent Mi Ja from telling her secret to Ok Hee. The next day at breakfast So Ri again gets an ultimatum from her father to close down Twist. After the conversation with her father So Ri is troubled by the thought of Ha Ru and Yoon-ah going to the U.S together. Will this be the end of So Ri and Ha Ru’s future together?

Where To Watch ‘Love Twist’ Episode 12

The South Korean drama ‘Love Twist’ is a television series that is broadcast by the KBS2 channel. People living in South Korea can watch this daily show from Monday to Friday on the given network. As for international fans, they can stream the ‘Love Twist’ episode 12 on the subscription-based website Rakuten Viki.