Ok Hee sees Gwang Nam talking romantically with Hee Ok and this makes her cry. Also, Kyung Joon convinces his parents that they should split So Ri and Ha Ru because of their parents affair. 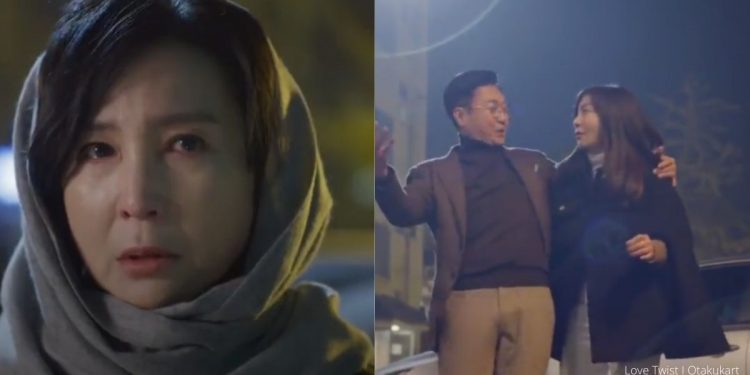 Ok Hee finds out that Gwang Nam and Hee Ok are having an affair. Post this revelation, she drinks all night and meets Madam Jung, who is Gwang Nam’s ex-mistress. Madam Jung assures her that they never had a physical relationship but only an emotional one. In ‘Love Twist’ episode 15, Madam Jung reveals that Gwang Nam’s true love is Ok Hee, but Gwnag Nam confesses that Hee Ok will be his only love.

Kyung Joon and his parents are worried as they find out that Ok Hee is supporting Ha Ru and So Ri’s relationship. This is because of So Ri’s father’s relationship with Ha Ru’s mother. Once the truth is out, the matter will become more complicated. Keep reading to find out how did Ok Hee react to finding out about her husband’s affair.

Till now, in Love Twist, we have seen that Ha Ru rejects the opportunity to go to the U.S and decides to run Twist with So Ri. His action is the result of their company getting a million-dollar investment and Ha Ru’s feelings for So Ri. After many years of suppressing their feelings for each other, Ha Ru and So Ri finally confesses their love. When Ok Hee finds out about this, she is keen on supporting them as they are the two most important people in her life. Moreover, So Ri’s mother tries to convince her in-laws to let So Ri continue her relationship with Ha Ru.

Other than the young love, Gwang Nam is also falling hard for Hee Ok. We could see that she also loves him, but her focus remains on the benefits that come with dating him. After Hee Ok throws a tantrum, Gwang Nam signs his apartment on her name. When Mi Ja finds out about this, she regrets not telling Ok Hee about her husband’s affair when she had the chance.

Ok Hee wants to know where Hee Ok lives, but she refuses to let her know anything about her life. Tired of trying to get information out of her friend Ok Hee calls Ha Ru and asks him to ask his mother about where she lives. In the end, she is successful in finding out her location, but it is not Ha Ru who texts her the address. Kyung Joon is also getting involved in the matter after finding out about Gwang Nam and Hee Ok’s affair.

The next day, Ok Hee decides to give a surprise visit to Hee Ok’s place but what she sees shocks her. She witnesses the betrayal of her husband from afar, standing in the shadow. While Gwang Nam and Hee Ok talk about the past and dance in public, Ok Hee cries and regrets having such a friend and husband. She cannot believe her eyes and thinks that she is hallucinating. Gwang Nam says that he will only love Hee Ok from now on, and his wife is nothing but chains holding him back.

Ok Hee gets drunk and meets Gwang Nam, mistress of the past. She tells her all about her struggles and tries to find a fix for her marriage. Madam Jung has always been indebted to Gwang Nam as he contributed a lot to her bar’s success. However, they were never in love, and whenever Gwang Nam visited her, he talked about his wife. Given this, Madam Jung suggests Ok Hee not to worry if her husband is having an affair because he will always come back to her.

The ‘Love Twist’ Episode 15 will be released on 31st December 2021. Being drunk, Ok Hee is convinced that Gwang Nam is having an affair only because he feels sorry for Hee Ok. The next day, when Hee Ok is called by her grandparents, Kyung Joon tries to warn her not to tell anyone about her relationship. This is because he knows that her father will never accept their relationship because of Hee Ok. However, So Ri is sure that no one will be able to stop her from dating Ha Ru.

Where To Watch ‘Love Twist’ Episode 15?

Also Read: Who is Soo-ho in Snowdrop K-Drama? Is He Really a North Korean Spy?

Where Is Gun Furry Filmed? Filming Location Of The Western-Action Movie