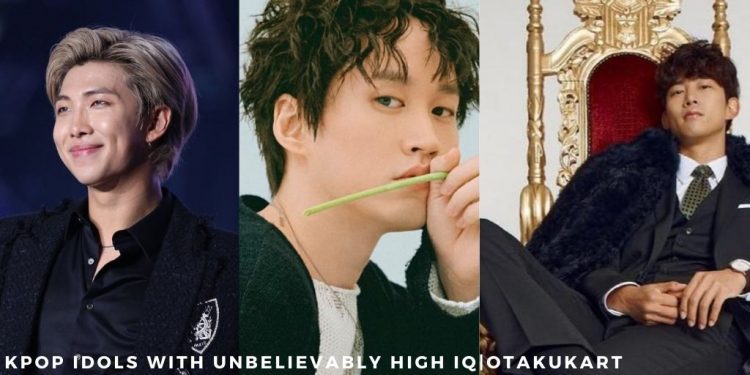 From setting the stage on fire with their performances to learning a dozen languages, there is no doubt that Kpop idols are very smart. It is a widely accepted belief all around the globe that celebrities are not exactly the smartest people. We get where this stereotype comes from, though. From constantly forgetting their passport, passcodes, breaking everything they touch (we all know who this one is), and losing their way at award functions. And, of course, the mandatory dropping of cake which now seems like a ritual.

Kpop idols are definitely clumsy, but that does not mean they lack in the IQ department. Additionally, all these idols have to go through intense training in order to debut. The idols have to master very hard choreographies in a short period of time. Not to mention how most idols learn to speak in different languages so that they can interact better with fans all around the world. You will be surprised to know that some Kpop idols have IQs so high that they are just a hair’s length away from being on Albert Einstein’s level. In this article, we will be listing down Kpop idols who have unbelievably high IQs.

What can this beautiful man not do? From pulling off the role of a psychopathic villain in the famous kdrama Vincenzo without breaking a sweat to being a triple threat. Ok Taecyeon will make you say, ”Ok Taecyeon! We get it, you are talented!”. Furthermore, he is the main rapper of the famous six-membered Kpop group 2 PM. Apart from being the main rapper, Taecyeon excels at songwriting and singing. Furthermore, Taecyeon was born on the 27th of December 1988 in Seoul but moved to Boston at the age of ten. Moreover, before coming to Korea and becoming an idol, Taecyeon was a member of the National Honor Society, Chess Club, Jazz Band, and JV Soccer Team at Bedford High School.

Apart from being the talented idol that he is, Taecyeon also studied at Dankook University and enrolled in Korea University Graduate School Of International Studies. This is new as most Kpop idols usually pursue an acting or arts course. Now that we have established the fact that Ok Taecyeon is one of the smartest kpop idols let us tell you his exact IQ. Ok Taecyeon has an IQ of 130 and scored a smooth 990 out 0f 990 in his TOEIC exam.

Super Juniors is one of the first bands that brought global attention to Kpop. Kyuhyun is 1/9 of Super Juniors. The group’s unbeatable success has won them the title of ”Kings of Hallyu Wave”. Furthermore, Kyuhyun is the main vocalist of Super Juniors. His vocals have made him one of the best musical actors in South Korea. Kyuhyun had grown up with well-established parents who wanted him to pursue law. And he would have if he had not found out how great of a singer he is when he joined a band in high school. At first, Kyuhyun’s father was completely against the idea but let him pursue his dream on one condition.

Kyuhyun had to be accepted into a prestigious university. And Kyuhyun not only got accepted but also received a master’s dissertation. Unsurprisingly, Kyuhyun has an IQ of 130. Moreover, Kyuhyun is especially an expert at Mathematics. He ranks among the top five percentile in the country for maths aptitude test scores. For this achievement, Kyuhyun was honored by Korea’s science and technology minister himself.

This Red Velvet member can not only sing, dance, and rap but is one of the Kpop idols with the highest IQs. Ever since childhood, Wendy was an overachiever. Additionally, she studied at Shattuck Saint Mary in Minnesota and was awarded multiple times for excelling both academically and in music. Born on the 21st of February, Wendy went on to receive the Obama Presidential Award in 2009. Moreover, Wendy has one of the absolute best vocals in the entire kpop industry. The definition of beauty with brains, Wendy has an IQ of 140.

Known to have one of the best, most perfect faces in all of Kpop industry, Cha Eun Woo rubs salt on all our wounds by also having an IQ of 142. This man is truly God’s favorite. On multiple occasions, Cha Eun Woo has made everyone’s jaw drop down to the floor with his genius on the variety show Master In The House. Additionally, Cha Eun Woo’s birth name is Lee Dong Min, and he was born on the 30th of March in 1997. Cha Eun Woo went on study at Suri Middle School and then Suri High School. Not once in all these years did Cha Eun Woo ever rank below the top five.

He once explained how even when he did not try at all, he would end up getting in the top 20 students of the entire school. Moreover, Cha Eun Woo won multiple competitions in English and aptitude tests. He is currently busy shining as one of the best rookie actors in the Kdrama industry while also studying at Sungkyunkwan University. Cha Eun Woo is surely a man of many talents!

Drumrolls for this one! Kim Namjoon, equally well known as RM, which is his stage name is the leader of the band that sensationalized the Kpop industry. If you look from afar, Kim Namjoon is a 27-year-old beautiful man who is extraordinarily clumsy and one of the best rappers in Korea. Because of his clumsiness, Kim Namjoon has earned the name God Of Destruction for breaking almost everything that he touches. But little did you know that Kim Namjoon has an IQ of 148. He got a perfect 900 on 900 in his  TOEIC, which he took when he was just in middle school.

For those of you who arent aware, TOEIC is an International Standardized English Exam for non-native speakers, which usually people in their 20s or 30s take. Another testament to his genius mind is how Kim Namjoon learned the English language just by watching the famous Hollywood sitcom Friends with his mother. And here we are, after watching thousands of kdramas and only learning to say ‘Oppa Sarangheo’. Additionally, RM was also one of the top scorers in the nation for the university entrance exams, which are really difficult in Korea. Despite being good at almost everything, RM is known to be one of the most humble Kpop idols.

This Kpop idol has an IQ of 150! Changmin or Shim Chang Min is one-half of the mega-popular duo TVXQ. Furthermore, Changmin was scouted by SM Entertainment when he was only fourteen years old. The funny thing is that Changmin only auditioned because his mother wanted to meet the queen of kpop i.e, BoA. This brilliant man excelled at both academics and performing even at such a young age. Furthermore, TVXQ’s Changmin not only has an unbelievably high IQ but also is one of the most educated idols in the Kpop industry. Changmin also ranked third in the entire country for the national high school graduation exam. The kpop idol studied postmodern music at Kyunghee University, which is one of the best universities in all of Asia.

Next, he earned honors in Films and Arts at Konkuk University. His thirst for knowledge did not stop there, and Changmin proceeded to get a master’s degree in management at Inha University. Changmin not only is a genius but also an inspiration.

Epik’s High Tablo is on Albert Einstein’s and Stephen Hawking’s level of genius. Brace yourself because this phenomenal kpop idol has an IQ of 160! Furthermore, he learned to play guitar at six and then piano at ten. Tablo’s birth name is Daniel Lee, and he was born on the 22nd of July 1980. Additionally, Tablo earned a Bachelor’s degree in English Literature and a Master’s degree in creative writing in just four years as he was a conterminal student at Stanford University. To add the cherry on top, Tablo wrote the lyrics for Rainy Christmas by Kim Gun Mo (yes! the most successful kpop singer in the 90s) at just the age of sixteen. Despite having a tough childhood, Tablo managed to live out his dream while also completing his studies. Tablo’s IQ and rapping skills will never fail to amaze us.