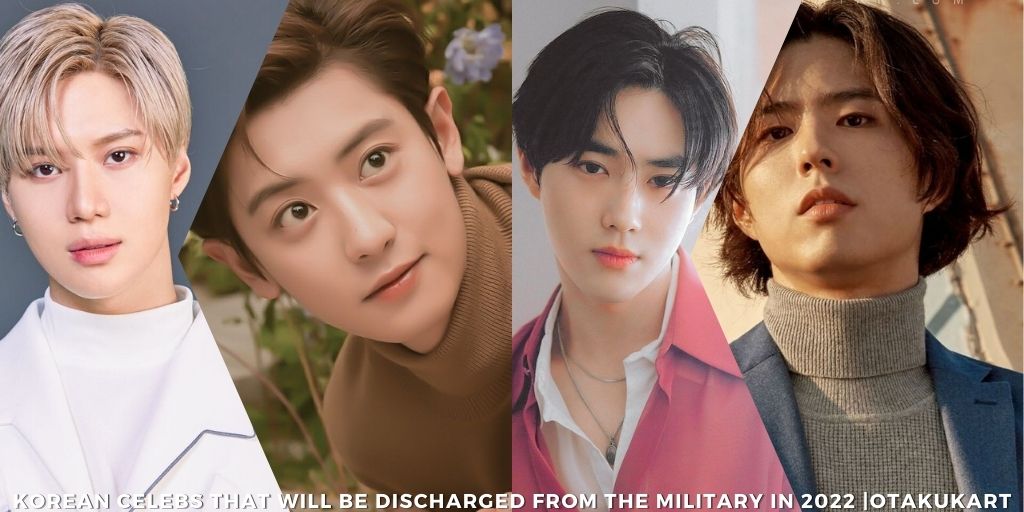 The year 2022 will be the year in which a lot of our favorite Korean celebrities will be returning from the military to serve us with great kdramas and music. Being a Kpop or a Kdrama fan is one of the most blessed yet cursed experiences. From constantly standing up for their faves against haters, making their faves top charts, and making their merch go out of stock within seconds, Korean entertainment fans have a lot of chores. However, there is nothing that Kpop and Kdrama fans dread more than sending their favorite idol off to the military for approximately a three-year-long period. For those of you who do not know, South Korea has had a Conscription law which basically means mandatory enlistment of people in the national services, ever since the year 1957.

Pertaining to this law, all healthy Korean males between the ages of eighteen to twenty-eight need to serve in the military. Although mandatory, the time of enlistment can be delayed in case of personal health issues. Furthermore, those who serve in the Army and Marine have to serve for twenty-one months, twenty-three months for those in the Navy, and twenty-four months for those who serve in the air force. Although fans have a tough time when they are gone, they can’t complain when their fave comes back looking hunky as ever. In this article, we will be talking about all the Korean celebrities that will be discharged from the military in 2022.

Korean Celebrities Being Discharged From The Military In The Year 2022

Check if your favorite Oppa is coming back this year!

After a two-year-long drought, Woo Do Hwan was discharged from the military on the 5th of January in 2020. Furthermore, Woo Do Hwan stepped into the kdrama world in 2011 with a guest role in the popular sitcom Come, Come, Absolutely Come. However, it was only in 2016, after his role in Sweet Stranger and Me, that fans saw what an acting powerhouse Woo Do Hwan truly is. He is most popularly known for his work in Tempted and The King: Eternal Monarch. Furthermore, Woo Do Hwan enlisted in the military in June of 2020, right after causing an uproar with his double role in The King: Eternal Monarch.

Thankfully for fans, Woo Do Hwan is right back to work after his discharge. He showed off his toned abs and chiseled features in a photoshoot with a Vogue fashion magazine.

Woo Do Hwan talked about how the time he served in the military has made him more appreciative of the simple joys in life. He further mentioned how despite being in the industry for almost a decade, everything seems new now. Additionally, Woo Do Hwan will make his return to the screens with the action-packed drama ‘Hunting Dogs‘ alongside Lee Sang Yi (Hometown Cha Cha Cha) and Kim Sae Rom (Nobody Knows). So get ready to see Woo Do Hwan as a boxer in his upcoming drama!

In July of 2020, Zico enlisted in the military, and fans have been patiently waiting for his return. Furthermore, Zico is a man of many talents. Not only did he win hearts as a Kpop idol and leader of the popular Kpop boy group Block B. Zico is also known for not letting go of his underground reputation because of his crossover skills. Furthermore, Zico is currently under KOZ Entertainment which he himself has established. From being South Korea’s cultural representative at the inter-Korean summit to being appointed as the goodwill representative of Seoul, Zico has done it all.  Zico enlisted as a public service officer in the military.

When fans started questioning why he was serving as a public officer and not as a traditional army, KOZ Entertainment revealed that this was because Zico had had heart surgeries in his childhood. Keeping his heart problems in mind, the government allowed him to serve as a public service officer. Many worried fans questioned why he was not exempted from the service. Fast forward to 2022, Zico will be returning in the April of this year after successfully completing his military training.

The nation’s Crown Prince, Park Bo Gum, will finally be returning after completing his military service in the April of 2022. With his wholesome personality and charming smile, this 28-year-old man has the entire nation wrapped around his fingers. From being friends with BTS’s V to making Song Joon Ki cry tears of joy after winning an award, Park Bo Gum’s magic is truly powerful. Furthermore, Park Bo Gum is known for playing a wide range of roles with absolute eyes. The man can switch between a villain, a prince, and an idol just by changing the way he smiles. He has also received the Top Excellence Award at the 30th KBS Drama Awards and was also awarded the Acting Award at the 16th Korean Assembly Grand Award.

If that was not enough, Park Bo Gum was also the first actor to top the Forbes Korea Power Celebrity List in 2017.

Moreover, Park Bo Gum served in the Navy as a cultural promotion specialist during his enlistment. While we wait for his return, check out Top 7 Park Bo Gum Dramas & Movies Proving His Remarkable Acting!

Kpop’s ‘dance machine,’ SHINEE’s maknae, and every kpop stan’s inspiration, Taemin, will be returning from the military in the November of this year. For those of you who do not know, Taemin is also known as the King of three generations of Kpop. He debuted as a member of the popular Kpop boy group SHINEE in the year 2008 under SM Entertainment. Additionally, Lee Tae Min started off his solo career in 2014 with the successful EP Ace. After slaying it both as a member of SHINEE and as a soloist, Lee Tae Min debuted as a Sumer M member in the fourth generation of Kpop. Moreover, Taemin created another league by breaking gender stereotypes prevalent in the Kpop industry.

His song move gained the name ‘move disease’ due to its popularity all around the globe. Taemin is also known as the idol’s idol, and rightfully so. Recently, when news of his worsening mental condition broke out, fans were very upset. But SM Entertainment released an official statement saying that Taemin will be transferred to the supplementary service department and complete his training as a public service worker. SM Entertainment further reassured fans that Temin is and will be receiving treatment and therapy while he continues his service. Fans wish him good luck and cannot wait for him to come back and bless us with his music again!

VIXX’s Ken returned after completing his military service on the 5th of January. Furthermore, the singer, songwriter and, actor informed fans of his military discharge through an overjoyed Instagram post. Fans will be glad to hear that Ken has promised to release new songs to ease the hardships soon. Moreover, Lee Jae Hwan debuted as a member of VIXX in 2012 and won all our hearts with his trademark husky voice. Throughout the years, Ken has blessed us with countless soulful OSTs such as In The Name Of Love for Heirs, When I See You for Moorim School, and Fool for The Legends Of The Blue Sea.

6. Suho, Chen, and Chanyeol from EXO

EXO fans will be blessed with the return of not just one but three members. Although they were blessed by the heavens when EXO made a successful comeback last year, fans truly missed Suho, Chen, and Chanyeol. Despite being in the military, there has been an abundance of good news for all the members and EXO fans. Firstly, Suho started off his solo career with his EP Self-Portrait, which not just topped charts but also won awards at all three major music shows. Moreover, Suho will be discharged from the military on the 13th of February, and fans cannot wait to see what he has in store for them. The second member of EXO that will be returning from the military in 2022 is Chen. Chen debuted as the main vocalist of EXO in 2011.

Furthermore, Chen is known for his beautiful voice. He enlisted in the military, and soon after, he surprised fans with his marriage announcement in 2020. Additionally, Chen also welcomed his second baby this year, and fans cannot wait to see her. Lastly, EXO’s Chanyeol will be returning after completing his military service in September of 2022. Furthermore, Chanyeol was the last member who was introduced to fans as a member of EXO in February of 2012. The all-rounder who can sing, rap, dance, act, and model has hinted that he has tons of tracks up his sleeve. Fans cannot wait for them to return. And who knows? Maybe we will be blessed with another comeback!