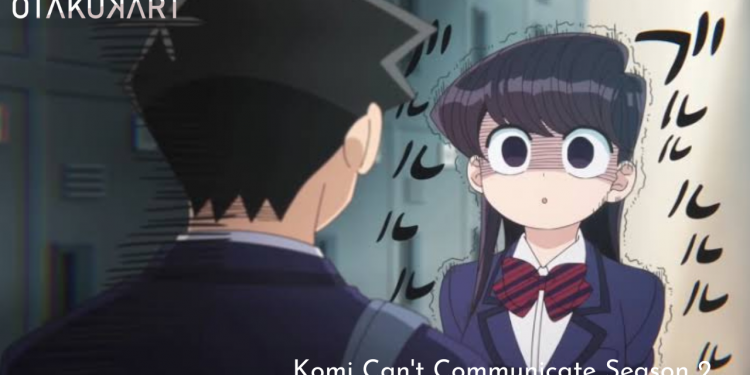 Long-awaited slice-of-life and rom-com anime, Komi Can’t Communicate premiered with its first season in 2021. The first season was a big and pleasant surprise for fans of the manga. It concluded in December 2021 after 12 episodes and the response it received was massively satisfying. In the past 12 weeks since it was released, every episode drew out the cutest and funniest anime scenes that had its viewers either rolling with laughter or feeling the fuzziest feeling of a wholesome high school life. Within hours of the anime’s conclusion, Komi Can’t Communicate Season 2 has been confirmed, leaving fans of the show furthermore hyped. If you enjoyed the first season as much as we did, halt! Because there’s more in store that the anime will be bringing soon to your plates to enjoy. If you were not already, it’s time to feel more excited for 2022.

Komi Can’t Communicate is based on the manga written and illustrated by Tomohito Oda. It was launched by Shogakukan in 2016 and has been ongoing since. So far, the manga has published 23 volumes and has sold up to 5 million copies. The manga was severely popular among avid Japanese readers, which is why it is quite surprising that it took so long for the manga to get an anime adaptation.

However, once OLM studios adapted the series, fans were completely satisfied with the updates. Now, Komi Can’t Communicate Season 2 has been confirmed as well and here’s all we know about the upcoming season of the coming of age anime.

Komi Can’t Communicate revolves around the titular protagonist, Komi, who faces a communication disorder. Shouko Komi is admitted into the elite Private High School. With her beautiful looks and overwhelming presence, she grows very popular among all the students. However, no one can come to talk to her and she gains the reputation of being the Madonna of the school. What no one knows is that Komi actually has a communication disorder and is desperate to talk to someone. Her disorder comes from her fear of rejection and anxiety.

Hitohito Tadano realises that she cannot communicate and becomes her first friend ever. Behind her ice-cold reputation and beautiful looks, Komi dreams of making 100 friends. The two bond slowly and Tadano decides to help Komi reach her goal of making many friends.

In addition to the big announcement, a PV was also released to commemorate the production of the new season.

Where to watch Komi Can’t Communicate?

Komi Can’t Communicate became quite popular among slice-of-life and romcom fans. If you are looking for the anime, the anime is currently available for streaming on Netflix.

Komi Can’t Communicate aired the season finale on 22 December 2021. In the season finale, we get to see Komi in a maid dress to boost our serotonin levels. The first season ended with happy notes with the cultural festival coming to an end. After all, can you name a better way to end a high school anime than in a cultural festival with a maid cafe? Komi Can’t Communicate proves to be a satisfying anime with several light-hearted moments to melt your youthful heart.

As per recent updates, the source manga of the anime will soon enter its final arc. So it might be a great time to catch on with the manga. You can read Komi Can’t Communicate on Viz Media.

Also Read: Most Popular Slice of Life Anime Every Fan Needs To Check Out