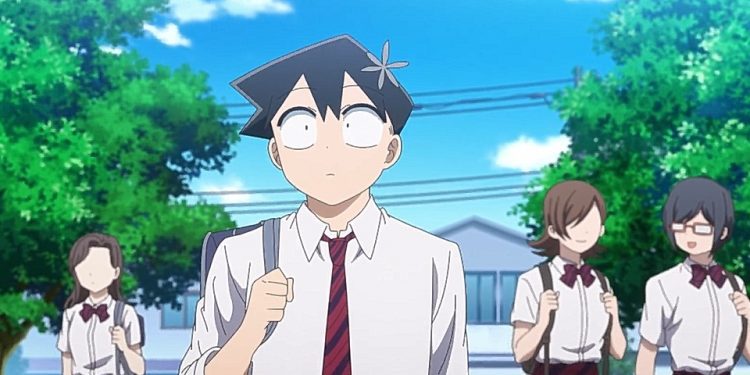 Komi Can’t Communicate Episode 10 reveals summer break after the students excel in their exams. Tadano thinks about other students and what they think or do during the summer break. After a summer break, the students returned to the school and saw that Komi had returned and she was more beautiful than before. Inaka Nokoko arrives at school and sees other girls and boys praising Komi’s beauty. In Komi Can’t Communicate’s latest episode, Inaka feels shy and wonders why all students are like that. She realizes that she always panic on her first day of school.

Inaka thinks that she is a country girl and supprises other students when she shouts that. She heads to the class and realizes that the first term was challenging. Inaka knows that she did not join the others during summer vacation since she was home. She believes that no one has noticed that, and if they did, they would stone her to death. Inaka realizes that all the girls wear short skirts, but she is the only girl who wears two inches skirt below the knees.

But she has changed after a summer break, and she has the confidence to be like other girls. On her way, she meets with the Goddess of the Class and wonders what the Goddess will say to her. Inaka views Komi as the Goddess of the class since everyone praises Komi. She realizes that Komi is the city girl, and she wants to be like her. Komi heads to her seat and nods her head, and Tadano knows she is greeting him. Osana arrives and wonders if they have extra classes since he doesn’t want to buy lunch and someone must help.

Osana asks Komi to buy him food, and Tadano thinks that Osana can go and do that. Inaka heard what Osana said, and she decided to try the same food as Osana thinking it was Komi’s favorite lunch. Komi decided to help Osana and Tadano thought she would say no. But Komi agreed after Osana reminded her that they are friends. Inaka decided to follow Komi since she will learn something new from Komi. Latter, Komi arrives at the food store, and Tadano follows her. But Komi is unaware that two people are following her.

Tadano wonders who the girl is following Komi since that girl was hiding. But Komi becomes nervous when she tries to enter the food store. She wonders what she will say, and Tadano is worried since he cannot help her. Komi enters the store, and the two follow her. The seller calls Komi to order and help her; Inaka wonders how Komi reacts. But Komi did the opposite and left the store without paying anything. Inaka wonders what happened that made Komi leave so suddenly.

Komi stans at the entrance and wonders what she must do, but she has promised Osana that she will bring him lunch. Komi enters the store again and thinks that she can face the seller. Inaka goes near Komi, and the seller waits for Komi to say what she wants, but Komi point at Osana’s favorite lunch. She realizes that she has forgotten something and tries to think. After buying, she headed back to the school, and Tadano was impressed that Komi did something without getting anyones’ help. She was relieved that she got over that part, and Tadano wondered if Komi was okay.

Komi Can’t Communicate Episode 10 will be released on 8 December 2021. Inaka arrived near Tadanao, and she was impressed that Komi used a smile to avoid all the questions. She vows to follow Komi for the rest of her life. Inaka heads to the store to buy what Komi has bought. Tadano wanted to talk with her. At school, Osana enjoys the food and thanks Komi. Let’s look at Komi Can’t Communicate Episode 10 official details.

Also Read: Class 1-A Training Begins In Chapter 337 of My Hero Academia.

Prince William’s Affair: How True is The Rumor?

Lost In Space Season 4: Is Netflix doing Another Season?