The most renowned architecture artists Ko-o and Nu-Ah competes for the first time in public. Also, Yeon Soo sees a sincere side of Woong and faces the reality of her feeling for him. 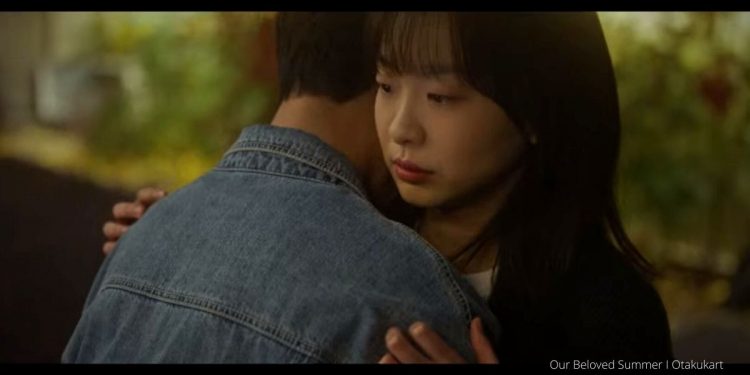 Yeon Soo gets to witness a new side of Woong at the competition. No matter how much they say they don’t care about each other, the truth is they are still in love. A day before the competition, Yeon Soo visits Woong to give him tea she has prepared for him. As she arrives at his doorstep, she finds out that he has taken sleeping pills. In ‘Our Beloved Summer’ episode 8, we will see Woong confront Yeon Soo as he remembers the last night.

This is the first time Woong is able to sleep so soundly in a very long. Also, we find out the real reason behind Yeon Soo breaking up with Woong. At the competition, Yeon Soo meets Woongs parents after five years, and their compassion makes her feel bad for what she did. Other than the competition, the documentary is also going to end soon. Keep reading to find out the story till now.

Till now, we have seen that Woong takes out all his anger on Yeon Soo as he thinks that she knows about Nu-Ah working on the Soen shop project. When he realizes his mistake, he apologizes to Yeon Soo. Still, she is not happy because, for the first time, his behavior is very strange. Later, when Woong is working on the 100-hour drawing, Yeon Soo is worried about him. Also, she is not the kind of person to not do anything when something troubles her. So, she decides to take tea to help Woong sleep before the big day. As she is about to leave, Woong holds her back and asks her to stay over.

In a flashback, we finally find out the reason behind Yeon Soo breaking up with Woong. In the past, even though they are always together, their lives are very different. Woong does not want to have a hard life, nor does he have any ambition to achieve success. Whereas, Yeon Soo has no choice as the reality of her financial life hits her. She has to work hard to take care of her grandmother and pay the debt that her unknown uncle left for her. Life alone is a big burden for her, so she decides to break up with Woong. She is scared that Woong might notice her inferiority complex someday.

Also Read: ‘The One and Only’: Know About the Intriguing Relations in The Show

The next day, Woong arrives at the art gallery where he will be competing with Nu-Ah. When he enters the green room, he finds Yeon Soo sleeping on the couch. He does not know what to do, so he sits there watching her sleep. After she wakes up, she hastily runs off, but before leaving, she wishes him good luck. Finally, the competition begins, and everyone is excited to see which artist will win.

After Ko-o completes his drawing, he starts walking towards Yeon Soo, but suddenly NJ arrives in front of him. The famous star comes to the competition just to congratulate Ko-o, and every reporter fights to capture this scene. At night as Ji Woong helps Yeon Soo get sober, he asks her if she still likes Woong? While walking back home, she thinks that it is impossible for her to still have feelings for Woong, but when she sees him outside her house, she is sure of her love for him.

The ‘Our Beloved Summer’ episode 8 will be released on 28th December 2021. Woong finally remembers that Yeon Soo was at his house last night. Also, he confesses his feelings for her and wants them to be there for each other. When they broke up, Woong became hopeless, but after four months, he finally decided to make his hobby his profession. Now that Woong has confessed his feelings, will he be able to stay away from Yeon Soo?

Where To Watch ‘Our Beloved Summer’ Episode 8?