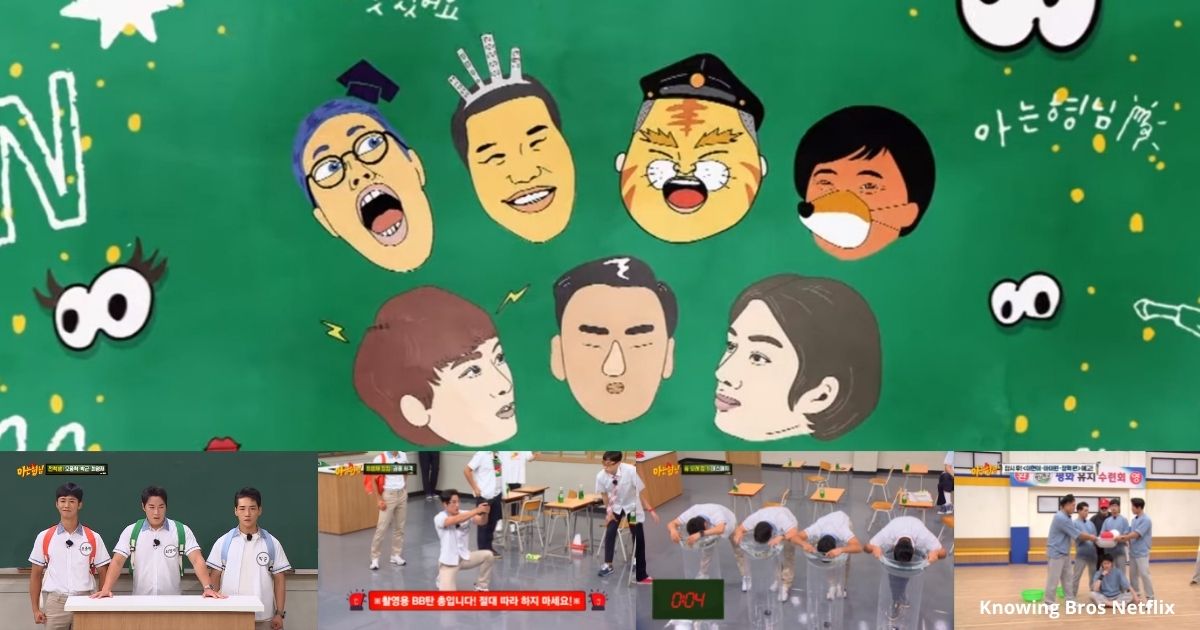 Till now the show has had many famous guests like the girl band ‘AESPA’, the ‘2 pm’ boy group and many more. But the showcase of the ‘Knowing Bros’ Netflix Season 6 was CL and Minzy’s guest appearance. All these amazing episodes make us wonder who will be the guest in ‘Knowing Bros’ Netflix episode 36? Well, as we can’t predict the future, let’s talk a little about the past and find out who was invited on ‘Knowing Bros’ in the previous episode? The previous episode was special as the guests were from another variety show called ‘The Iron Squad’. There were many amazing stories to share and fun activities to execute. Let’s find out what happened when ‘The Iron Squad’ visited.

Also Read: Temptation Of A Wife’ Kdrama: Review, Season 2 & Where To Watch

After the ‘F4’ fencing team and famous rappers like CL and Minzy, who could be the guest on ‘Knowing Bros’ new episode? Well, this time, it is ‘The Iron Squad’ men. The guests are the iron man of the special forces Koon Park, from Marine special unit Jong Hyuk oh and lastly, the former special forces member Young Jae Choi. For those who don’t know, ‘The Iron Squad’ is a very interesting and adventurous South Korean variety show. Here the former members of the army, navy, and air forces units can challenge former officers from other troops. The concept of ‘The Iron Squad’ variety show is unique as it is a survival program to determine which is the strongest force in all of South Korea.

Also, ‘The Iron Squad’ variety show comprises five main hosts Kim Sung Joo, Jang Dong Min, Kim Hee Chul, Kim Dong Hyun, and Chuu. Moreover, there are many guest hosts invited to the show. One of the guest hosts was ‘Knowing Bros’ permanent cast member Heechul. Now moving on to what happened in the ‘Knowing Bros’ episode, in the beginning, we see all the three guests infiltrating the classroom with their amazing action move and everyone cheered for them. Then ‘The Iron Squad’ explained what is the role of each special force unit and all three members are trained in one or another specialty. The episode was really funny and informative as everyone shared how hard soldiers train when they are in service.

After the long section of sharing funny stories of how a soldier overcame the struggles put in front of him, it was time for the first challenge. The first challenge was a breath-holding contest. Everyone wanted to see which representative would be the victor. Also, the ‘Knowing Bros’ cast members were not left behind. A cast member joined our heroes in the contest. All the participants were competent and gave their best. But the winner could only be one and it was our iron soldier. Can you guess who it is? Well, it is our special forces member Young Jae. The competition was tough as a lot of us thought for once that Sang-min would beat him. The Young Jae held his breath for 3 minutes and 2 seconds.

After the winner of the breath-holding competition was determined, everyone was back to having a casual conversation. But the mood turned hilarious when Jong-hyuk was asked, what’s harder, marriage or marine corps? This was an unexpected and really funny question. And to this, Jong-hyuk replied that in the service, you have an opportunity to succeed in your rank. You can dream of a day when you’ll be discharged from the service. But as of marriage, you are like a seaman apprentice and there is no hope of getting discharged. But the sweet closure was he said that he is really happy with his marriage.

Another interesting story that was revealed on the show was of Young Jae. Before enrolling in the service, he trained to become a bodyguard. So, he was not supposed to care about the status of the client but only about his or her protection. One day he received a call to be a bodyguard for a presidential candidate. And while he was doing his duty, he was captured by a reporter glaring at the camera. The picture of Young Jae got so famous that he was fired by his client. Because honestly, no one wants to have a famous bodyguard.

Also, we have a story of how Young Jae Choi became famous. This might be more interesting than the ‘Knowing Bros’ episode itself. As per the guidelines, all the bodyguards are supposed to cover the client from all sides so that they are visible to the public. But there was an incident where Young Jae couldn’t get into the elevator along with the client and all the other bodyguards. So he politely asked them to proceed and took the stairs. No one expected to see him in front of the elevator when they reached their floor. But as the elevator door opened, there was Young Jae standing sturdy. It was so shocking to all that he could match up the speech of the elevator that he got recognition for his professionalism and fitness.

The Genius Shooter of ‘The Iron Squad’

Even though our hero took a moment to gasp for air like a dog after the client went forward. Luckily, because of the incidences that happened in his life, Young Jae was recognized by brands and got an offer to do a cosmetics commercial. But when he received the call from the CEO of the cosmetics company, the opportunity was lost. And this was because he heard that Young Jae was scary. And the person who said this was Heechul. Imagine if Heechul had said that his master has amazing skin. How funny that would have been for a student to say for his master. But all in all, the deal was off.

Then we moved to the next act that was apple shooting. In the past episode, when F4 visited, they performed the same kind of activity that was piercing the apple with the sword. Let’s see what happened this time. As one person threw the apple in the air Young Jae’s extraordinary shooting skills were confirmed. Both the shots hit the target, and it was a surprising sight.

After Young Jae, our third hero exhibited his top skills. Did you know what amazing skill Koon Park has? Apparently, Koon can pierce anything with a chopstick. Once, he pierced a wall with a chopstick. This exceptional talent is rare to find. So again, when it came to the apple, Koon Park made sure to pierce it accurately. Truly, the special force representatives from ‘The Iron Squad’ were amazing. And this was a must-watch episode.

The ‘Knowing Bros’ Episode 36 release date is 30th November 2021. In the previous episode, the cast had a lot of fun with ‘The Iron Squad’ and we got to know about many insider stories. Right now what we are looking forward to is the upcoming episode where we might see Lee Hyun Yi, Irene, and Jung Hyuk visiting as transfer students.

The people in South Korea can watch the latest episodes of ‘knowing Bros’ on the official broadcast channel A network every Saturday. As for international fans, they can watch all the past as well as the upcoming episodes on Netflix. On Netflix new episodes are released every Thursday. It is the best platform for international fans to catch up on the ‘Knowing Bros’ variety show.

Also Read: Her Private Life’ Kdrama: Cast Updates And Where To Watch