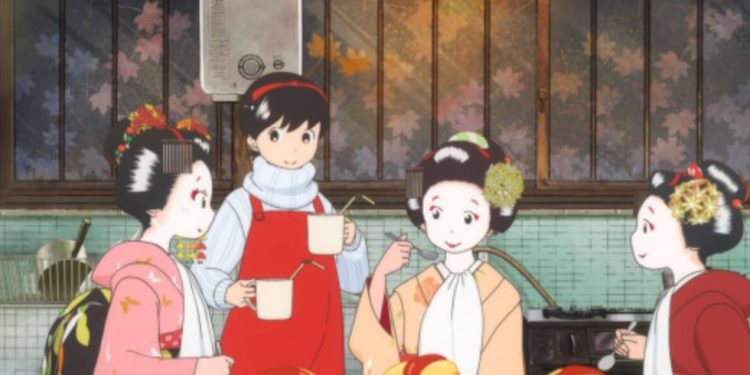 Kiyo in Kyoto Episode 12 will release after getting delayed this month. We will be looking at the previous episode of Kiyo in Kyoto since the anime is continuing where it left. In the recent episode of Kiyo in Kyoto, Kiyo had trouble since she couldn’t decide what to cook for supper. She asked the maiko what they would eat, and they told her different dishes. Sumire told her that she would have fried chicken. Her craving grows so strong and begins to entertain the customer. But she later went home and returned to the Maiko House. Sumire met with Kiyo, and they greeted each other after finding that Kiyo was preparing a fried chicken.

Sumire gets excited knowing that it is for her and has been craving it. Later Mamohana arrives, and Kiyo prepares a bowl of nabekko dumplings for Mamohana.  In the morning, Kiyo continues with cooking and nourishing the maiko. She prepared everything without disturbing the maiko, who was still sleeping. She prepared breakfast and headed out to buy groceries. In the afternoon Kiyo prepares lunch for the maiko since they are hungry from lessons. She served them before they went out for training.

In the evening, Kiyo cleans up before joining the public bath. She later takes a stroll enjoying Kyoto at night. In the second segment, Kiyo cooks curry rice at the retired cook’s house after knowing that no one can cook curry in the maiko house. In Aomori Prefecture, Kenta visits Kiyo’s Grandma’s place and learns that she has received a letter. Keita finds that the letter is from Kiyo and recalls how Kiyo and Sumire changed school notes. He realizes that he will never forget Kiyo’s handwriting since it catches his attention.

On New Year’s eve, Kiyo returns home to enjoy New Year with her grandma. Sumire and Kenta join Kiyo and grandmother on New Year, and they talk about different things while preparing the hometown walnut sauce for Ozoni soup. Later, Kiyo Sumire and the maiko girls met back in Kyoto, they were given a day off, and they went to the river and enjoyed camping. After taking a day off, the girls return to work; the Maiko House girls rush to quickly prepare for the first day at work. Sumire has changed her hairstyle and gree Mother in new style since it is New Year.

She wears a formal black-crested kimono outfit worn on celebratory occasions. Kiyo makes a special breakfast in the kitchen for such an auspicious day. The maiko knows they have to take care while eating breakfast, and Mother brings premium beef. Kiyo wonders what she will make out of that beef. The maiko returns and admits it is cold and tries to turn on the heating appliance, but they find no electricity. The maiko suffers from cold and sits while trying to warm themselves.

But Kiyo prepares a steaming hot pot for them, and they get better. After a week, the Setsubun festival arrives, and everyone has to wear costumes since it is customary for Geiko to dress costumes for the festival in Kagai. The makio wakes up late and helps with the props and costumes. The girls went to the other room after waking up. Sumire tried to look for something inside the kitchen in the evening to help everyone. She had dinner with  Momoko and a regular customer. But she failed to develop a good menu and decided to eat whatever Momoko was eating.

Also Read: Love of Kill Episode 1: Everything To Expect?.