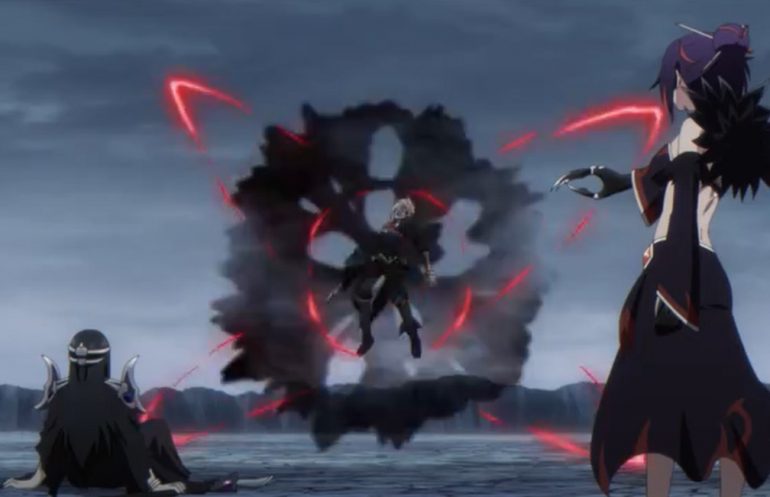 Preview and Streaming: King’s Raid: Successors of the Will Episode 16

Battle in the Badlands

The Black Edge faced with the death of their comrades and before they could recover from the shock the sorcerer Malduk appears. While Demia and Scarlet are on the other side. Demia asks Scarlet if they can assign men to take be on guard so that she can rest and Scarlet said she will be fine. In the other side of the world, Demon Maria sensed that Malduk is causing trouble in the real world.

Riheet and the Black Edge are angry at Malduk for killing Tamm. Malduk reveals that this is his territory and he is going to control them like a puppet. Tamm got reincarnated as the undead and Azal thought that it was normal Tamm. The undead Tamm slays Azal with his sword and kills him in two slashes. Malduk laughs at the Black Edge saying that his undead puppet will feast on the life of the living.

King’s Raid: Successors of the Will Episode 16 Release Date and Recap

King’s Raid: Successors of the Will Episodes 16 will be released on Saturday, 16 January 2021, at 1:23 AM JST. This Anime will be releasing the new latest episode every Saturday. You can watch or stream this Anime officially on  AnimeLab and Funimation. Let’s take a look at the recent development below.

Previously on King’s Raid: Successors of the Will Episode 15

Tamm cashes with his comrades and Riheet said that he is dead but being controlled by Malduk. All attacks they hit Tamm with were for nothing since Tamm also regenerate quickly. Ripine notice that and decided to finish Tamm since others were hesitating. She realizes that Tamm is in pain even though they try to save him it won’t help since he is the undead. Lupine draws her sword out and cuts Tamm’s head.

Malduk gets angry and kills half of the Black Edge crew using magical spells. Scarlet and Damia saw a huge blast and started wondering what is happening. Other members charged blindly and got killed in an instant but only Ripine, Riheet, and Riheet henchman survived. The trio started to clash their sword with Malduk without giving him a break. They cornered him and Lupine stabs Malduk’s heart from the back.

Malduk realizes that he is finished and use an insolent level to survive. His power level rises and sends Lupine along with Riheet flying and demon Maria appears. She teas Malduk that he is being overpowered by mere elves and she has seen that he is having trouble. Riheet gets up and saw that Ripine is badly injured and he furiously clashes with Malduk. Maria noticed that Riheet’s anger is making him powerful and he is destroying Malduk.

She interferes by using a spell that holds Riheet in mid-air. After sucking his powers she releases him and he falls to the ground. Maria said that playtime is over and Scarlet arrives charging at a high speed with the knights riding on horses. Maria noticed that they are outnumbered and decided that they must retreat. She said that she can’t take a risk and let Malduk being taken down and the two use their powers and vanish.

When Scarlet arrives with her art she can’t believe that all members of Black Edge have been taken down. Scarlet orders Damia to check for the survivors. Meanwhile, Kasel wakes up at the Ogrestian Mountain he asks about the black-haired demon Malduk. Frey replies that Malduk has disappeared and Cloe reveals that Kasel has been asleep for half a month. Kasel felt like he has defeated Malduk yesterday and he is not aware that Malduk has taken down the Black Edge.

Kasel is worried that they let Malduk get away and it means that the Dark Lord might come back soon. He wanted to leave but Frey asks him not to push himself he must first rest. Kasel said that they have to get the Holy Sword as soon as possible and everyone insists that he must rest. Roi reminds him how Kasel went on a rampage after defeating Malduk and he was uncontrollable and then fell unconscious.

Roi said that he Kasel let his emotions drive his actions that might happen again. The Ogres that was taking Kasel lightly before he clashes with Malduk now call him master and he is just surprised. They reveal that his battle with Malduk was impressive and they have never witnessed such impressing power before. The Ogre shed tears of joy, saying that Kasel created a gust of wind, wielded earth-shattering powers, and sent sorcerer Malduk running for his life.

The guy praises Kasel wholeheartedly and said that his power is granted by the goddess Lua. Since Kasel can’t remember anything he started wondering if he posses such powers. After resting for a few days Kasel and his crew decided to leave the Ogrestian mountain. They decided to head for the Windland Snow Mountains and the Ogres decided to accompany them until they pass the mountains.

The vice chief of Ogre calls Frey in private. He reveals how Kasel enters the world as a hero and rushes down a path of war. During that path, Kasel will disappear and Frey is scared but Kasel also had a dream about that. The chief advises Frey to work on avoiding the outcome the dream predicts since it does determine the future and it can be avoided.

King’s Raid: Successors of the Will Episode 16 Preview

All thanks to the Anime rewatch and latest preview see you next time with the new update of this anime.