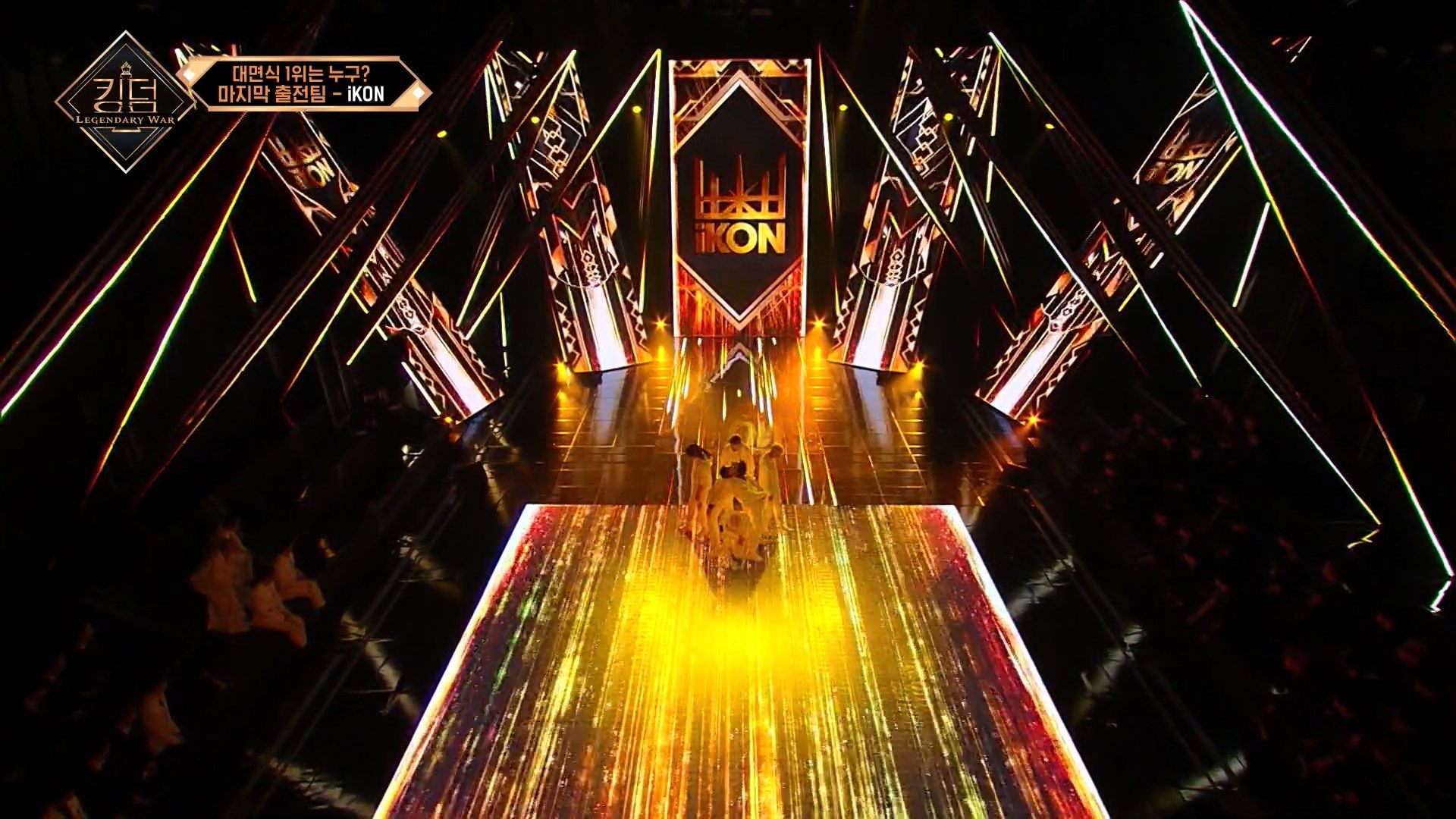 Even Korean industry time and organizes reality survival shows. The latest one is the Kingdom: Legendary War, which creates quite the hype on the internet after its commencement. It portrays not only the performances of six different groups but also their interactions and bonding. The show will also feature competition among many established groups to the younger teams. They will compete against one another for becoming and winning the title of the King of the K-pop world.

It is also a chance for the groups to gain more recognition, even worldwide, and create a more fan base. With more fans, more international recognition and exposure will come to the team. Of course, each team already have their fandom. Now, let’s know more in detail about the Kingdom: Legendary War Episode 2.

Kingdom: Legendary War starts in CJ ENM llsan Production Center. The host announces that the Legendary War, Kingdom is beginning, the journey to find the best for sitting on the throne. The number one song was the meet and greet performance in the genre of the music video. THE BOYZ boy group said they have to perform much better on the Road to Kingdom as they do not want to lose in the show. Next was the BTOB boy group, and they said that their identity is concise. Hence, they are very much confident. SF9 boy group says that it is a chance for them to burn the show passionately. ATEEZ boy group also would like to make an impression. iKON boy group has their color, and Stray Kids boy group are impressionable and mature stray kids.

The first episode introduced the six boys groups- THE BOYZ, BTOB, ATEEZ, SF9, iKON, and Stray Kids that will take part in the competition for taking their crown. The global judges that are the audience, via votes, will also play an immense role in choosing one of the boy’s group as the winner. It is a win or loss situation for each of the boy groups now. THE BOYZ boy group is the first to step into the Kingdom. They were also the winner of the Road to Kingdom. Secondly, the Stray Kids boy group enter the Kingdom. THE BOYZ group also welcomes them.

Evaluation will take place in four categories. Participants’ self-evaluation will contain 25%, expert evaluation 25%, global fans and Korean fans in a global evaluation of 40%, and 10% for the number of views on the global platform. One team will get chooses as the winner in the meet and greet performance. They will also get 1000 points. Episode 1 showed their meet and greet performances. However, the result did not come out as to who is the winner.

Kingdom: Legendary War BTOB boys group are the legendary vocals. They have the most seniority level among the six groups in the industry. BTOB means Born to beat that made its debut in 2012 under Cube Entertainment. Only four members, namely Peniel, Eunkwang, Changsub, and Minhyk, are participating, currently as Sungjae and Hyunsik are away for military service. Pop Ballads are a weapon for the BTOB group and are also popularly known for the same. The introduction performance given by Kingdom was Beautiful Pain.

Kingdom: Legendary War iKON boys group are the charismatic group who has quite a lot of swagger in them. The competition runs in their veins. They also previously participated in various other reality shows such as Show Me the Miney, WIN: Who is Next, etc. iKON made their debut in 2015 and is under YG Entertainment. They currently have six members in their show that are taking part in the competition. They are Bobby, Chanwoo, Jinhwan, Donghwak, Ju-Ne, and Yunhyeong. The introduction performance given by iKON was Rhythm Ta.

Kingdom: Legendary War SF9 is the most versatile group as they are multitalented from all disciplines. They can sing, dance, rap, and even act. SF9 means Sensational Feeling 9 that made its debut in the year 2016 under FNC Entertainment. The group currently consists of nine members- Youngbin, Chani, Inseong, Hwiyoung, Jaeyoon, Yoo Taeyang, Dawon, Zuho, and Rowoon. The members of the group themselves look like a model that is well built and handsome. The introduction performance given by them was Good Guy.

Kingdom: Legendary War The Boyz are a team of grace and beauty. They are also the winner of the Road to the Kingdom of Mnet. The Boyz made their debut in the year 2017 under Cre.Ker Entertainment. Their performances are quite daring and creative. They currently have eleven members in their group- Sangyeon, Eric, Jacob, Sunwoo, Younghoon, Hyunjae, Ju Haknyeon, Juyeon, Q, Kevin, and New. Since they were already the winner once of another survival show, they know the difficulties they have to cross again to succeed. The introduction performance given by them was The Stealer.

Kingdom: Legendary War Stray Kids have raw intensity within them that ignites the stage with their performances. They are also known as the SKZ that made their debut in the year 2017 under JYP Entertainment. There are currently eight members in the group- Bang Chan, I.N., Lee Know, SeungMin, Changbin, Felix, Hyunjin, and Han. They did acrobatics in their intro stage that went quite well among the public. Miroh was their introduction performance that received a compliment from everyone.

Kingdom: Legendary War Ateez are the storytellers that convey their feelings through stories, bodies, and movement. they are the youngest among the six groups and also went first to give their introduction performance. Their expressions and performances are also so good and powerful. Ateez made its debut in the year 2018 under KQ Entertainment. Their group currently has eight members- Jongho, Hongjoong, Wooyoung, Seonghwa, Mingi, Yunho, San, and Yeosang. The Wave was their introduction performance. 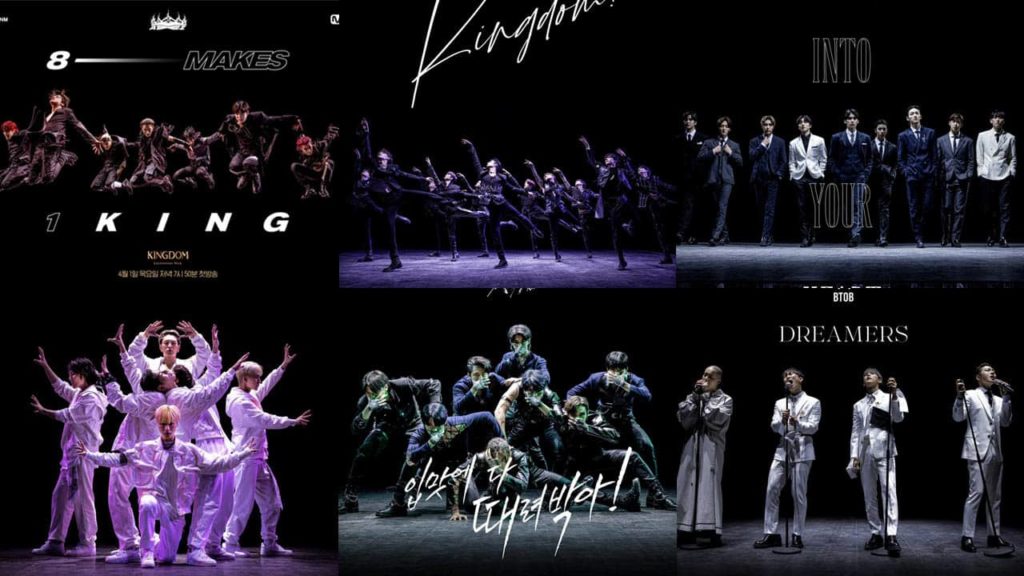 Kingdom: Legendary War Episode 2 release date is on April 8, 2021, on Mnet original network at 20:00 KST or 7:50 p.m. So, we only have a day until the arrival of the next shocking and amazing performances of the boy’s group. Kingdom Legendary War will come to an end on June 03, 2021, with ten episodes. The most interesting to see about Kingdom Legendary War is that the teams participating in the show are new ones and the ones that have been in the industry for more than ten years. But, only one will take the crown and become the king of K-pop.

Kingdom: Legendary War will be officially airing on Mnet. However, the official YouTube channel of Mnet, Mnet-KPOP, will also have the next episode’s previews and clips of the performances that take place on the stage. After the show gets over, it will also be available on the Viki streaming platform with English subtitles for watching. There are also many unofficial sources where the upcoming episode will be available after one day of release for watching.