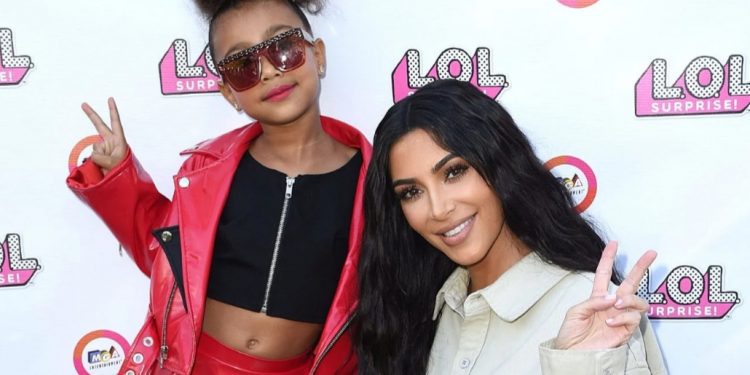 Who doesn’t know about Kim Kardashian and her 8 years old baby girl, North West? For those who are unaware of what’s going on in the world of entertainment, you should know that Kim Kardashian and her daughter North West have recently launched their joint account on Tiktok. Starting from the basics, Kimberly Noel Kardashian is an American socialite, model, and businesswoman. Many of you have seen her starring in the show Keeping Up With The Kardashians! since 2007. She tied the knot with Kanye West, who is an American rapper in 2014. The couple gave birth to four children- North West, Chicago West, Psalm West, and Saint West. Unfortunately, with the failure of their romance, they parted ways in September 2021.

Their separation didn’t affect the mother-daughter relationship. On 25 November 2021, the mother of four children, Kim Kardashian and North West started their Tiktok channel where the baby girl sometimes showcases her skincare products, cousins, and sisters. Also, the mother makes appearances at times. They also lip-sync on certain trending songs. It gets very difficult to decide who gives the better face – mother Kim or daughter North? Let’s dig into this article to know more about their new Tiktok account.

Tiktok is such a platform where you can showcase your talents and skills and with that, you become a celebrity. Many celebrities are on Tiktok where they spend several hours making trendy videos for fun.

It’s been a few days, the worldwide famous personality Kim Kardashian with her 8-year-old daughter, North West has joined Tiktok. Their channel’s name is @kimandnorth. To be more precise, it was on 25 November 2021. Their debut video is a spa day one. The video included the shots of them using Kylie Jenner’s skincare line products. They were also lip-syncing to the song Need To Know, sung by Doja Cat. In the first 48 hours, their channel earned more than a 1.6million followers and 9.1million likes. In that couple of days, their account had 30+ videos.

It’s very funny to see that 8-year-old baby girl North West participate in the snap transitions trending videos, also lip-syncing on certain songs. She has also made a few videos featuring her sister Chicago West, and cousins like Penelope Disick and True Thompson. At times, her mother Kim Kardashian also makes some appearances. It gets difficult for the viewers to decide who looks cuter. The baby girl was already famous for her mother. But now, she is making herself work harder in making cute Tiktok videos. With this, North West is gaining more popularity and people are adoring her cuteness. If you haven’t watched any of their videos, you are missing out on something really funny and cute. You must follow their channel for the cute updates.

Also read: Who is Kallmekris on Tiktok? Everything You Want to Know About the Famous Canadian Tiktoker

We all know that Kim Kardashian and Kanye West are no longer together. It’s been a couple of months since they have broken up. Nothing specific is known for their sudden split. But it’s more like a long-distance relationship. In several interviews, she stated that it was difficult for her to be with Kanye as he used to live in some different states. After turning 40, she realized that it was getting hard for her to move with her husband, Kanye along with the four kids. It’s the little things that she expected or wished from him. She always wanted her partner who would work out with her and have a common show. But living with Kanye was getting more difficult for her. Thus they parted their ways. It seems good as long as they are consenting adults.

Now, what’s up with Kim Kardashian? She is. currently dating Pete Davidson, who is an American comedian. We wish their relationship to last forever. It’s good to see Kim Kardashian enjoying and spending more of her time with the kids.

Also read: Who is Colleen Ballinger on Tiktok? Everything We Know About the ‘ M Miranda Sings’ Character