Kim Hyun Soo needs Shin Joong Han's help to prove him free of guilt. However, the corrupt law authorities are not making things easier for them. Yet, the duo is set to continue their battle against the unlawful system. 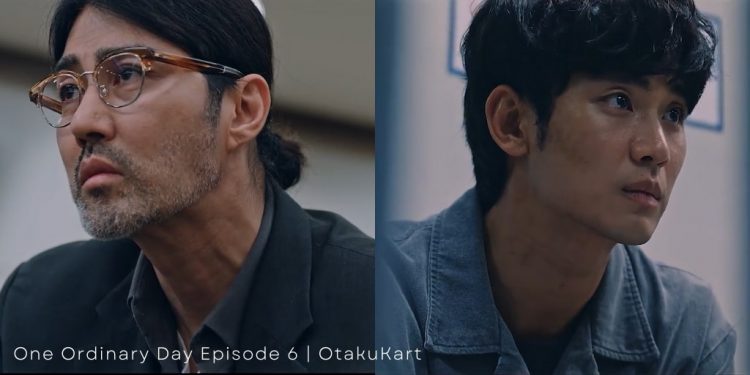 The crime thriller One Ordinary Day Episode 6 is releasing soon! The story has taken a new turn! First of all, there have been many twists and turns. But nothing much has been unveiled about the main plotline! The past week One Ordinary Day mainly has focused on how Kim Hyun Joo withstanding his new life in a hellish prison. Secondly, the twist we all did not see coming is Shin Joong Han getting kicked out of this case. But then again, it seems his kicking out was necessary because now Kim Hyun Soo has become sure that he did not kill Hong Guk Hwa.

The crime mystery has also shown a different side of the law system. Captain Park and Prosecutor Ahn do not know when to stop and are ready to go any length to prove Kim Hyun Soo guilty of the chrysanthemum case! One of the things that the kdrama highlights is the emotional state of the characters. All leads have excellently delivered their roles, showing every little detail on the screen. The acting is one of the reasons the drama’s getting excellent reviews. Both Kim Soo Hyun and Cha Seung Won executing their characters remarkably, making us eager for a new episode. The latest episode also hints that Shin Joong Han will be getting back with Kim Hyun Soo and helping him out. Therefore, look forward to One Ordinary Day Episode 6. It will be leading us into the deeper part of the unlawful system!

One Ordinary Day Episode 6 will be released on 12 December 2021 at midnight on Coupang Play. Since the kdrama is scheduled for 8 episodes, we have only three episodes left! Finally, the plot has thickened. Also, we are getting new clues about Hong Guk Hwa’s murder mystery.

I'm so thankful for Cha Seungwon's character, Lawyer Shin in #OneOrdinaryDay. His existence adds some lightness to the otherwise very intense & heavy drama. I need a bit of a time out to process #OneOrdinaryDayEP4 my god the manipulation it had! Only Lawyer Shin cared for Hyunsoo pic.twitter.com/QwgiUg2Wod

The suspect list is increasing with the rehabilitation center doctor joining the group. After all, the motive of the crime is not revealed, so almost every new character seems questionable. Who can deny this kdrama skeptical gene? It is all thanks to the writer, who has written the kdrama in such a riddle-like way. After all, a way to get out of this mess is still unclear! Thus, If you are curious about the next part of the chrysanthemum case, watch every new episode of One Ordinary kdrama on Saturday and Sunday.

South Korean viewers can watch One Ordinary Day drama on the original distributing network, Coupang Play, at midnight KST and at 2 am in Australia. The drama will be released on 11 December 2021 at 3 pm in the UK, 10 am in the US, and 9.30 pm in India. However, Coupang Play is not accessible for global viewers yet. Therefore, international watchers can watch One Ordinary Day kdrama on ViuTV. Keep note that ViuTV is accessible only in a few selected countries.

As we all know, One Ordinary Day kdrama is a remake of BBC’s Criminal Justice. However, the Korean version seems slightly deeper, focusing on the prime suspect. So far, we have not found any principal suspect. Therefore, there is a high chance the upcoming episode will reveal a new suspect.

Already our suspect list consists of Guk Hwa’s father and her friends and her neighbor, and now the rehabilitation center doctor. The way the story unfolds, for sure, Guk Hwa’s murder is definitely related to her past. Therefore, the trace of the murderer must be somewhere hidden in the past. Hopefully, the upcoming One Ordinaday Episode 6 enlightens her history, her relationships, giving us clues about the chrysanthemum case.

Mamamoo’s Jung Whee In has given her sweet voice to One Ordinary Day’s OST. The drama has even dropped a music video that perfectly suits the OST. One Ordinary Day OST Part 1. ‘Ice Cream Love’ by Mamamo’s Wheein will push you on the softest clouds. Her gentle, sweet vocal has flawlessly mingled with the slow and smooth tempo of the OST.

Not to forget, the lyrics of ‘Ice Cream Love’! They are perfectly level with the sweet night date Kim Hyun Soo had with Hong Guk Hwa. ‘Ice Cream Love’ by Wheein will make you fall in love with the sweetness of her voice, healing and soothing your cold heart! If you haven’t heard the OST, don’t forget to check it out!