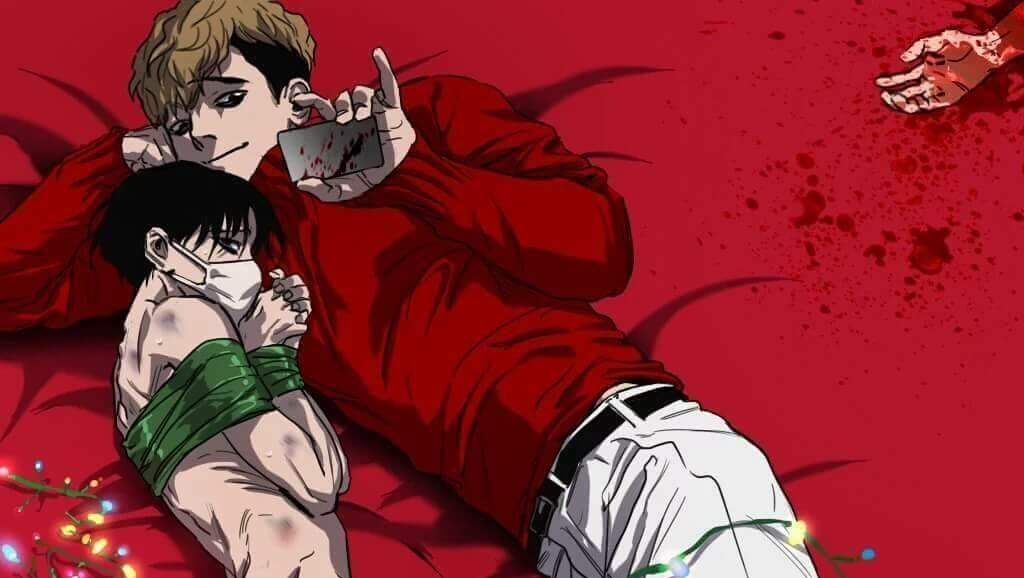 Killing Stalking is a famous South Korean manhwa comic book series involving drama, horror fiction, and psychological horror. The book is written and illustrated by Koogi, a comic book creator. After the success of the book in Korean, it also got published in English by Lezhin Comics. The book got published on November 24, 2016, in English digitally and on January 16, 2017, in Japanese.

The book also got published in Italian by Edizioni. The story is around two mentally disturbed people, one of them being overly obsessive and overthinker and the other one being a psychotic and violent pin disguise of a sweet person. Though the book at times gives the vibes of romance and love originally, the book is psychological horror. The book basically has a dark-themed story and mostly contains the mention of a few inappropriate topics like rape, self-harm, brutal abuse, violence, sexual harassment, blood, and death. People under the age of 18 and people with soft hearts are strictly asked not to read the book.

Overview Of The Storyline And Character Analysis Of The Book, Killing Stalking-

Yoon Bum and Oh Sangwoo are the main characters of the book. Yoon Bum is a young man having a mentally ill personality due to his disturbing past. His parents died when he was young, which led to him growing up with his grandmother and his uncle, who turned out to be his nightmare. Since when he was young, his uncle tortured him by abusing, starving him, and also raping him occasionally, which led to a deep impression in his mind. To make things worse, his friends also bullied him during his school years, additionally getting sexually harassed and raped in his military days. Being a long-time victim and being deprived of any source of attention and affection, he often harmed himself by cutting his wrists. 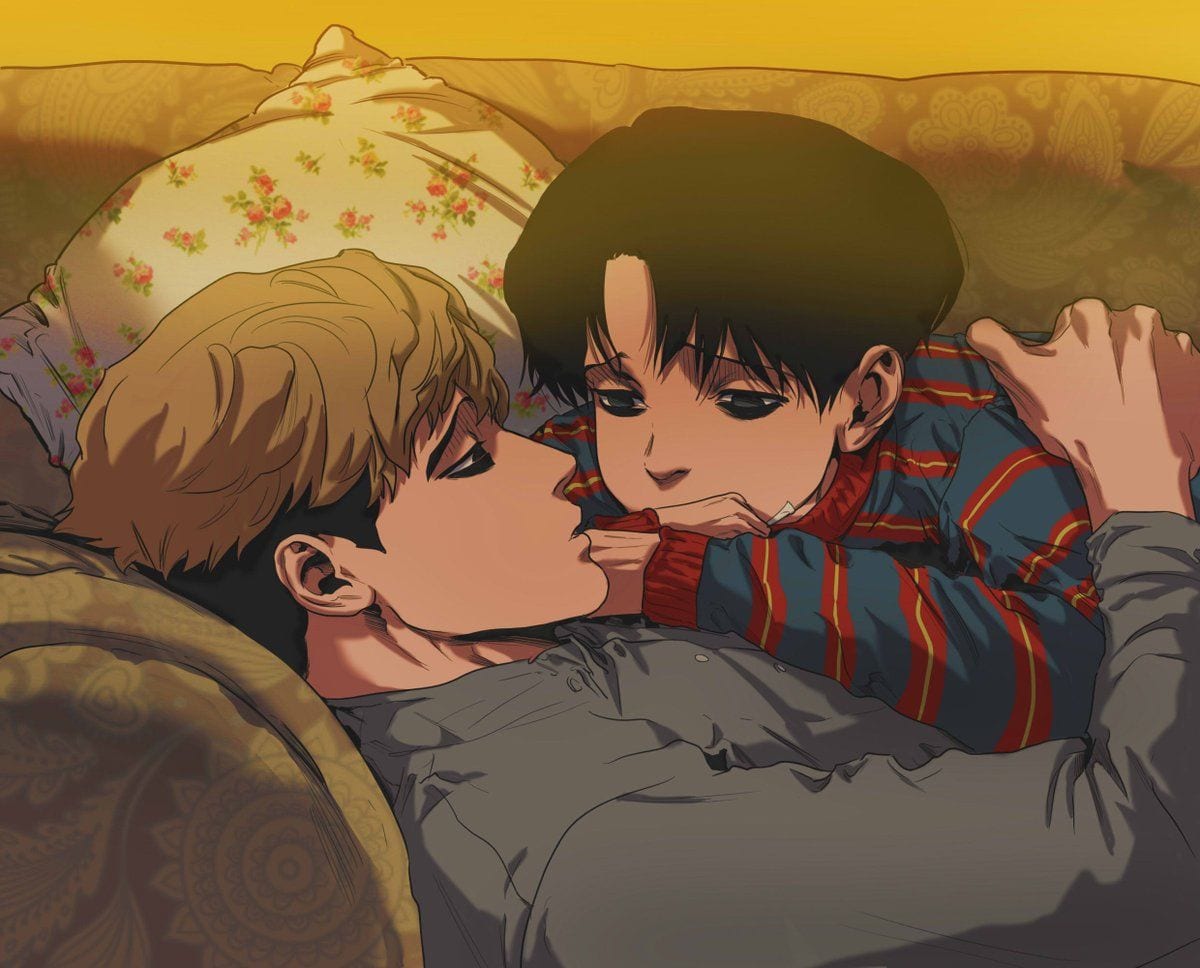 The abusive and manipulative relationship between Yoon Bum and Sangwoo

Due to the total absence of love and care in his life, whenever anyone showed the least amount of affection, he got attached and clingy towards them. One such person in his life is Oh Sangwoo, who Yoon sees as his saviour. In Korea, military service is a compulsory thing. Yoon participants there but faces sexual assault where his commander tried to rape him. He gets saved by Sangwoo, who had clean intentions and feelings towards Yoon. After the incident all Yoon found himself falling for Sangwoo as he was the first person who showed him affection. He grew obsessive over Sangwoo and used to get jealous whenever he saw him with a female as he suffered from Borderline personality due to his past. No matter how much he tried to deny his feelings, he couldn’t.

Sangwoo has a sweet nature and is quite popular among the girls. But most of them were unaware the reason behind his smile that he flashed often was hidden a ruthless psychopath who is a toxic person , an abuser, rapist. He is highly narcissistic and not regretful of his merciless actions neither the victims. Behind the sweet, caring person in front of the strangers, his actual nature is enough to chill your spines. He believes in torturing victims gradually, beats them up though he sometimes favors females.

Another character in the book is Yang Seungbae, who is a police officer and previously an investigator. He believes his intuitions when evidence is missing, and surprisingly his intuitions are pretty much accurate. He was the investigating officer of Sangwoo’s parent’s murder, but as the case was declared invalid, he had to give up officially but still continued with the investigation and became doubtful of Oh Sangwoo’s character.

The Ending Of The Book Explanation-

Yoon Bum’s crush turned obsession led him to stalk Sangwoo, and within a few days, he found out the harsh truth about Sangwoo’s personality. Sangwoo, when he saw Yoon reacted soon and tried to break his legs. Taking advantage of Yoon’s feelings for him leads him to an abusive and manipulative relationship. Yoon makes multiple attempts to escape from his feelings, his house, and the unhealthy situation he created. And the other side Sangwoo is confused about his real ruthless self and his blooming feelings for Yoon. 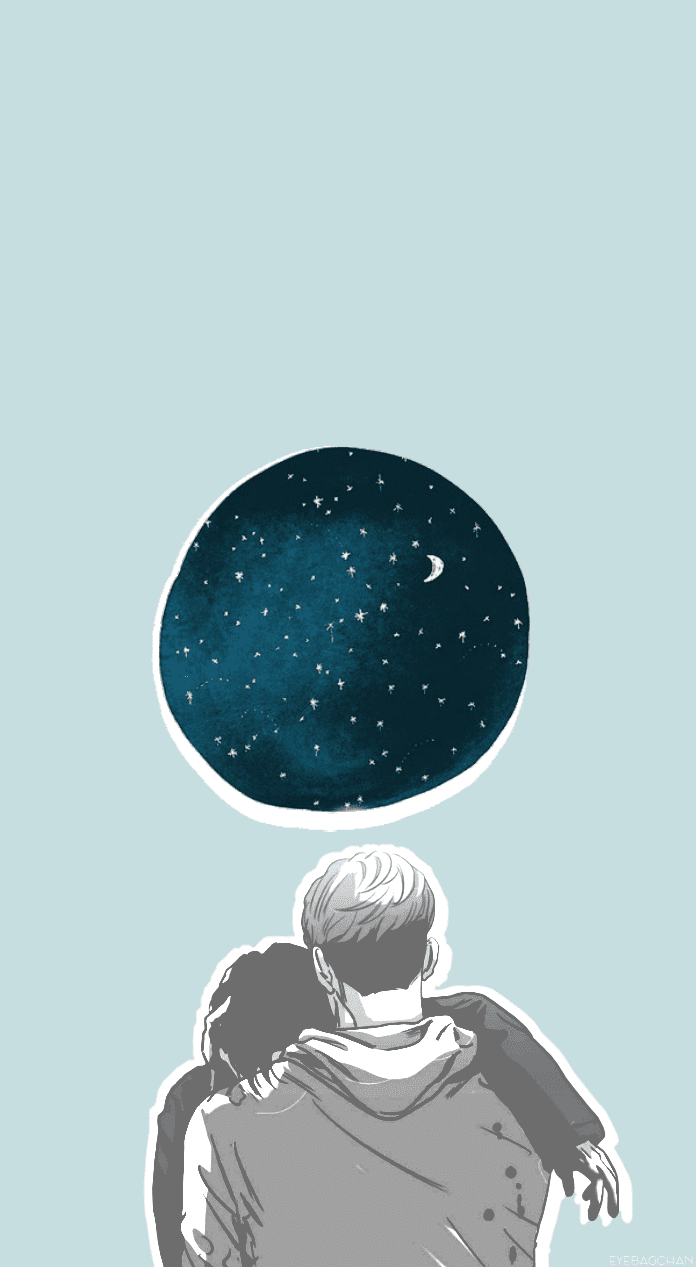 Yoon Bum wishes Sangwoo was a normal person, and both of them leave happy.

Seungbae, with his sixth sense, finds out Sangwoo’s truth and arrests him. Sangwoo being an intelligent manipulative person, escapes jail pretending a victim. Seungbae finding out no other way to punish Sangwoo for his crimes, sets his house on fire. This didn’t kill Sangwoo but injured him severely. However, Yoon, completely aware of Sangwoo’s real self, could not hide his will to visit him despite all the abuse and pain. When he finally reaches the hospital, he gets devastated by hearing that Sangwoo already passed away a few days ago. A hospital staff hands Yoon his ashes, and on the way, he overheard a lady saying that she killed Sangwoo because he kept on calling Yoon Bum’s name.

This brings back all the good memories both of them made together, and Yoon regrets not arriving earlier to meet the person he’s in love with. The ending scene shows Sangwoo with a woman, which is solely Yoon’s imagination. The scene is portrayed contrary to the previous scene where Yoon finds out Sangwoo with a woman. In the previous scene, Yoon was falling for Sangwoo and is completely unaware of his real personality and gets jealous. In the ending scene, Yoon is totally aware of the psychopath Sangwoo is and the pain and abuse he has brought to him. Despite all of it, he still wishes to have a normal life with Sangwoo only if he could turn back time.

Sangwoo is no more, but his effect on Yoon is always present. Yoon keeps being a victim by the past memories; the book ends with a red signal in a road. The death of Yoon Bum is totally left to the reader’s imagination. It can be majorly agreed that Bum has passed away, and Seungbae might have accidentally killed Bum, the person he wanted to save.

Though the book received ₩100,000,000 Grand Prize Award at the Second Lezhin World Comics Contest, it faced a lot of controversy for its intense violence, the portrayal of a manipulative and abusive relationship, and the wrong indication to homosexual people. The book glorified abusive mentality and relationship as romantic and is a bad example for the readers.