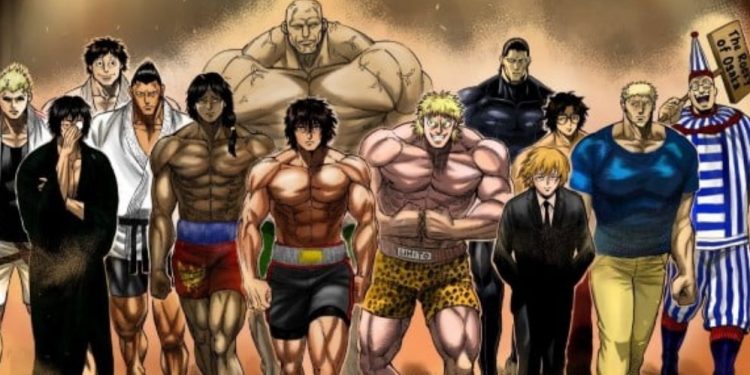 Kengan Omega Chapter 141 reveals the three-way battle between the Kure Clan and Wu Clan that begins after the end of the competition. Raian Kure met with Edward Wu, Solomon Wu, and Fabio Wu. The two revealed themselves as The King of Brutality: Fabio Wu and Fist Breaking King: Solomon Wu. They decided to make Raian pay for his crime, but Raian refused to submit. Kengan Omega has delayed the upcoming chapter since the manga took a break. In the previous chapters of Kengan Omega, Raian got brutalized and pinned to the ground.

But he got up when the trio was about to leave and decided to fight back. That made Edward angry and reminded Raian that he should have stayed unconscious and saved his life, and they would have spared him. But Raian didn’t care, and The King of Brutality: Fabio Wu and Fist Breaking King: Solomon Wu begins to punish Raian with barrages. Raian finds resolve snd uses Removal against them, which makes Edward realize that Raian is something. He beat the two, and Edwar interferes, landing his signature kick that sends Raian flying.

Fabio and Solom hold Raian, and Edward punches him and reminds him that he will never win on 3v1. However, Mighty Demon Kure Erioh arrives and realizes that one from the Kure Clan is receiving the beatings. Erioh kills Fabio with a Demon signature move, and Solomon gets angry that his brother is dead. Solomon promised that he would kill the geezer that killed his brother, and the geezer would pay with his life. Edward stood and thought that Solomon’s rage would help him beat the Mighty Demon Kure Erioh. Solomon uses Removal against Erioh, who realizes that he has to slice Solomon.

Solomon took his 100% form and wanted to end Erioh, who uses a single Sword Style and cut through Solomon’s body. Erioh reminds Solomon that brats don’t have a match against him and Solomon’s body falls on the ground in half. Edward realizes that Erioh will bring a challenge, but he will kill him soon. He begins to talk, trying to settle things, but Erioh thinks Edward did something unforgivable and tries to kill him. Erioh swings his blade and miss, but Edward is surprised to see another sword trying to cut him from behind.

Edward uses his reflexes to survive those two slashes and realizes that this guy is waiting to make a surprise attack. He found that the guy who attacked him from behind was the Head of Wu Clan: The Master of Phantasms-Wu Xing. Edward praises Xing that he almost chop his head off since he was not expecting him to pull a coward trick. Xing reveals that he will kill the guy who kills his uncle Fabio and Edward has to pay for his sins since he has killed countless people. Edward told the two to relax since they could settle the matter without violence.

He told the two that they were both potent and head of the Clans, and they could leave the battle without fighting. They can pretend that nothing has happened so no one will get hurt. Xing was not interested in that since he wanted to avenge his uncle. Erioh feels that Edward is wasting their time and attacks him. Xing also attacked Edwards, who kicked him away. Erioh also receives a powerful punch that sends him toward the wall. He reminds Erioh and Xing that he warned them, but they will pay with their life.

Kengan Omega Chapter 141 will be released on 6 January 2022. Erioh and Xing try to fight back, but Edward punishes them. Edward reminds them that he is The King of Hades: Edward Wu. The Mighty Demon Kure Erioh and Head of Wu Clan: The Master of Phantasms-Wu Xing vs. The King of Hades: Edward Wu continues. Let’s look at Kengan Omega Chapter 141 official details.