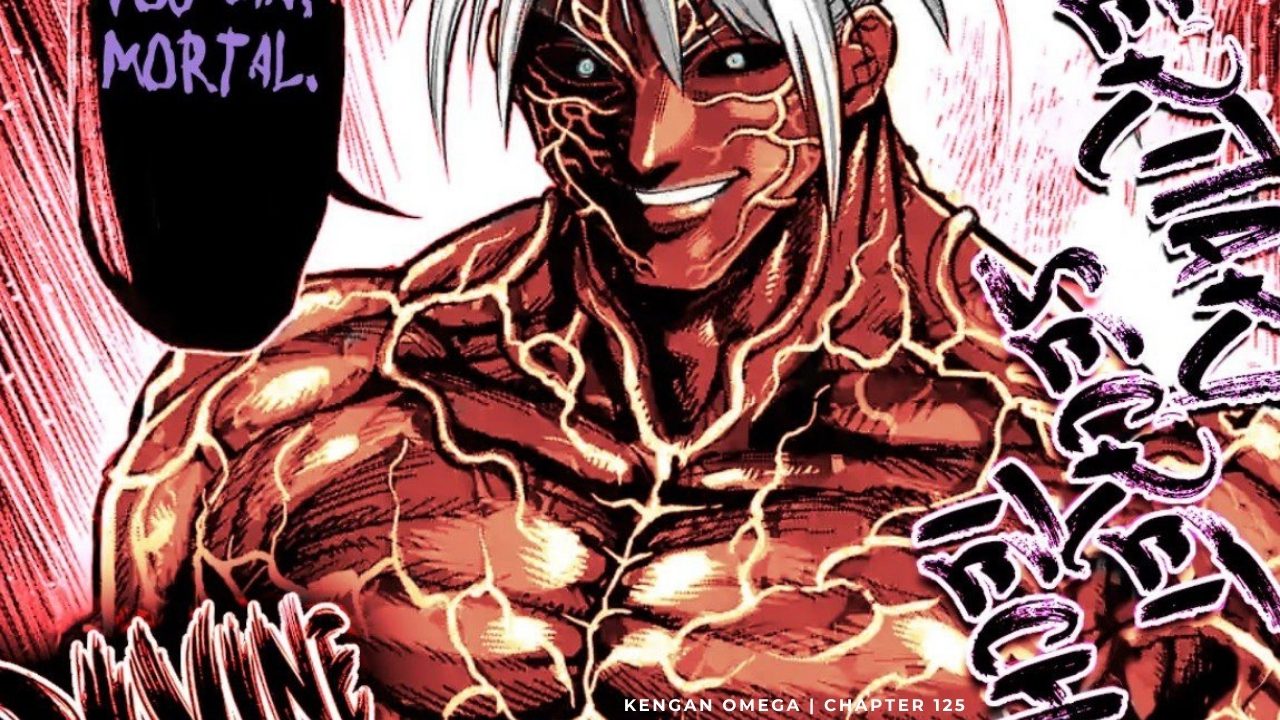 Fei vs. Takeshi begins with Kengan Omega Chapter 125, with Fei getting up at the count of four and shocked the arena. This upcoming chapter will be available this coming week. From the latest Kengan Omega chapter, Fei maintained his ground, and Takeshi wonders how that skinny guy survived his mighty blow. The commentator is impressed that Fei ate the massive strikes and managed to survive. Shin Alisa was about to call a stop to the fight, but the battle continues since Fei is back in good shape. Fei comments that he is not down since he is bit his tongue.

The chapter title is ”The Merits of Strength.” Koga wonders how Fei took that straight hook and survived. No one took Takeshi’s straight hook and survived. Onhma reveals that Fei used Redirection Kata and Water Kate to survive the damage. They realize that Fei has been using the same technique, which is why Fei is keeping up at the same level as Takeshi. The Niko Style is enhancing his body to take any massive stikes and damages. Fei has perfected the combination of Redirection and Water Kata, using them at a High Level.

Kazuho wonders if they can grab a victory, and Ohma comments that they have to put faith in Takeshi. Fei uses Flame Kata and Flash Fire against Takeshi. Takeshi stands his ground, ready to counterattack since Fei is circling him. He realizes that this is the same technique that Tokita unleashed during his battle. Fei appears out of nowhere and landed an Adamantine: Kata: Tomahawk Kick that smashed Takeshi’s face. After eating that blow, Takeshi begins to see two Shadow Clones of Fei. He realizes that he is in danger, and if Fei gets a clean hit, it will be a KO.

Takeshi notices that it is challenging to engage Fei, who is moving like a rocket. Okubo notices that Fei has amazing footwork. Agito is also impressed by Fei’s footwork. Takeshi decided to exchange barrages, but Fei uses his Taichi moves to dodge the barrages. Fei landed a body blow of Flam + Water Kata: Obliteration. The attack sent Takeshi to the ground after sliding for a long distance. Takeshi breathes hard and tries to get up, but Shin Alisa is at the count of three. Fei makes that HIYAH move of Chines when they are conquering the opponent.

Everyone is surprised that a well-known Legeandasry Kengan Association Fighter is down. The Superhuman Great Wakatsuki Takeshi is struggling to get back on his feet. The Purgatory Gladiator is just warming up with many ace cards on his sleeves.  Fei heard the commentators praising him that he is Purgatory Gladiator and comments that who cares about that, but he is just built differently. Inside the Infirmary, The Falcon is enjoying the fight and realizes that master Fei is stronger. Kokomi is taking care of The Falcon since he is recovering from injuries he sustained during the battle.

Liu Dongcheng thinks that something is fishy since he is feeling bad about this bout. Liu wonders if the guy is fighting is Fei that he knows.  Fei decided not to give time to Takeshi to recover. Fei unleashes Adamantine + Flame Kata: Flashing Steel Blast that destroyed Takeshi. Takeshi realizes that this brat has hurt him, but he prepared well for this fight. He uses a throw, thinking that he can send Fei out of the ring. Fei uses Redirection Kata to stop the throw. Fei uses Niko Style Tertiary Secret Technique: Dive Demon and KO Takeshi.

Kengan Omega Chapter 125 will be released on Friday, 10 September 2021. Note that Kengan Omega releases every Friday, but the latest chapters arrive late on Saturday. The manga will take a weekly break once a month, but we will update new developments of Kengan Omega every seven days. If the new chapter is out late, it will be updated the following day; Kengan Omega manga official platforms are not accessible for now. We will meet when the Kengan Omega manga releases.