Kengan Omega sometimes delays its chapter lets look at the recent updates. The chapter title is ”The Legend of The Masks.” The King of Combat vs. The Silent Nightmare continues. Okubo made the first move, but Terashi countered that and blocked the massive blow with the palm of his hand. That was a wise move by Okubo since Tearshi’s hand is smoking like he touched a hot iron. Okubo’s strike was powerful enough to knock out any warrior. He realizes that it is a hunch, but hunches are usually correct. Okubo realizes that he has to keep on attacking until something comes.

Tokita Ohma realizes that Okubo promised that he would take care of Terashi quickly. If Kengan failed to win this one, their victory would be a loss since only three matches are left, and they need to will all three. If they lose one and win two, the tournament will draw and go for another last fight. Let’s find out if Okubo will get the job done and bring Kengan back on track. Okubo thinks he knows how strong Terashi is, and he will face anything coming on his way.

Okubo notices that Terashi keeps his leading right hand and wondered if that arm got poisoned. Terashi folds his hand and signals Okubo to fight him. Okubo fakes a swing and goes for a low kick that Terashi manages to dodges. Terashi begins to see Okubo’s movements quickly. Okubo avoided the leading arm and tried to attack the head, but Terashi kept his guard and avoided the high kicks to get closer. Ohma wonders why the fight is going that way, and the others join him.

Julius Renhold notices that Okubo is not striking and wonders why. Wakatsuki Takeshi replies that Terashi is strange and Okubow would have broken that defense. Terashi has not shown natural defense or offense, and no one thinks that Terashi has experience in modern martial arts. They notice that he weirdly dodges the low kick. Tokita Ohma told Kanoha Agito that Terashi has only a height advantage, and Wakatsushi said Tershi is no match for Okubo.

Okubo withdraws two hits, and his movements are weird. The fighters noticed that Okubo is scared to be touched by the right hand. But he is alert, and Tershi told Okubo to talk and wonders why a comedian is quiet. Okubo replies that he is a hilarious and powerful King of Combat. Okubo believes that Terashs might have a trump card other than his right hand that he can use against him, and he has to keep his eyes open. 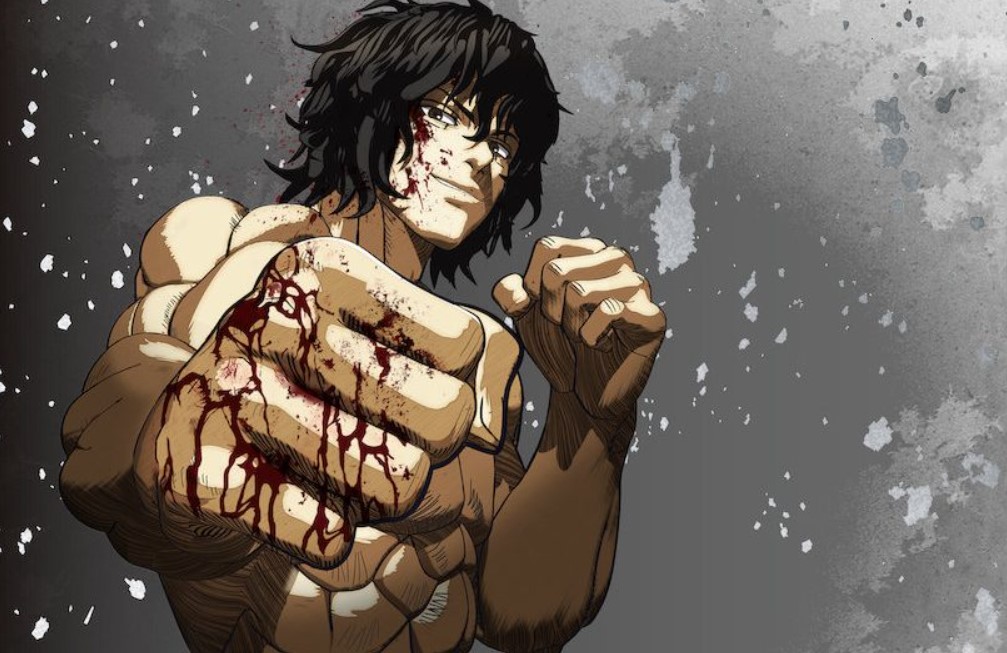 Okubo decided that he will keep the fight at a distance until he finds Terashi’s tricks. Okubo realizes that he won’t grapple, and he will have to go with striking. The two begin to exchange blows. Okubo told Terashi that they could fight as he lands another low kick. Terashi tried a vast slap, but he received two double ”kicks” the first one on his belly and the second hit his wrist. Ohma notices that Okubo is guarding Terashi’s palm.

Terashi tried to recover, but he received two heavy right hooks that that pushed him back. Okubo starts to pick up the pace. Fei WangFang notices that Terashi’s level and Okubo’s level are different. Carlos Medel talked about Nino and realized that no one told him anything and wonders about the famous assassin. Fei WnagFang replies that he didn’t talk too much, but he wanted to explain the killer. Lolong Donaire asks if it is a story from Spring and Autum. Fei is surprised the Lolong knows Chines history.

Lolong replies that he heard stories about a martial artist from the Chu state known as Long Min. Due to Long Min’s strength, people thought that the Chu State would have United China if they were five Long Mins. Carlos Medel said he is not getting the story, and Fei reveals that Lolong and Long Min would have been the strongest, but a person rivaled him. The Masked Assassin, Fa whose true identity is unknown. The match continues with Terashi heading to Okubo.