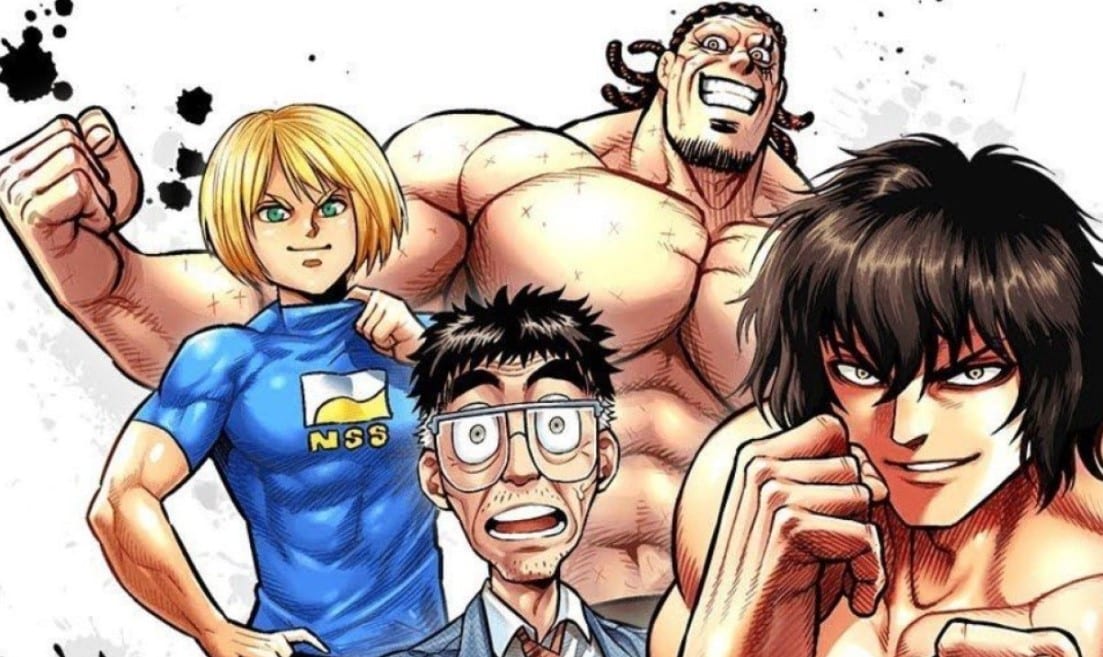 The battle between Nicolas and Akoya continues while Teddy, Rin, and Guillame conclude their meeting. They realize that Nicola, who is fighting, is no longer the same. The chapter is titled The Grim Reaper’s Poison. Kengan Omega battles continue below. Rin notices that Nicolas, who is fighting, looks like someone they know. Teddy also noticed that and told Rin that this is not Nicolas. Guil comments that that’s the Nicolas he knows ever since young. He asks Rin who that guy is and what he is doing in this competition.

Rin replies that she will find out, but she is suspecting Nicolas. Meanwhile, at the ring, Nicolas has landed a blow that has affected Akoya’s vital organs. It has been revealed that Nicolas Le Banner is a worm imposter. Akoya manages to recover from those blows and realizes that he ate those. He decided to be careful with Nicolas’ poison technique. But he has noticed that his nerves have got broken, and Nicolas has been tearing them apart. The poison that affected him earlier made him lose the mobility of his hands.

Akoya realizes that Back Slap is the one that took his vision away. Nicolas attacks again with a Back Slap that swings and missed. Akoya jumps back, and Koga is impressed that Akoya manages to dodge that one. Kazuo wonders how Akoya manages to do that. But the poison strikes again, and Akoya begins to lose body balance, and his right arm loses its mobility. Agito notices that Nicolas is attacking Akoya’s nerve to break his body down. He realizes that no one can block Nicola’s attack with normal defenses.

Nicolas realizes that he just has to paralyze Akoya and win the battle. He decided to poison Akoya before the last poison runs out. He realizes that the poison lasts for forty seconds. Akoya landed a heavy elbow blow at Nicolas’s face. Nicolas notices that Akoya hit him with his paralyzed arm. The blow changed Nicolas’s face. Nicolas falls on his back, and Akoya comments that he will purge all the evil even if his flesh should rot away. The commentator reveals that was the first knockdown for Akoya.

Nicolas raised his hand and told Akoya that Aha come and join me, and he landed a palm blow that knocks Nicolas down. The fans, commentators, and fighters wonder why Akoya is down. Both fighters have fallen down, and it is a double knockout. It has been revealed that Nicolas used Sahate to paralyze the diaphragm causing impaired breathing. But after a count down both fighters are back on their knees. Nicolas wonders how Akoya has survived that since it was a finishing blow.

He comments that his techniques don’t work on a mighty guy like Akoya. Nicolas steps forward and asks Akoya what the difference is between a heavyweight and a middleweight. He answers that the answer is striking power, and Nicolas attacks Akoya quickly with effective strikes. Nicolas said question two is what is the same between heavyweight and middleweight. Meanwhile, Rin, Teddy, and Guil investigate Nicolas, but they were clueless.

Back to the battle, Nicolas comments that he is glad to kill Akoya on a night like this. The battle continues with Nicolas standing on his feet. He is ready to finish Akoya, who seems weaker than Nicolas due to the poisons that destroyed his nerves. We will find more truth about Nicolas Le Banner next week when a new chapter hits. We will also find out if Akoya will recover and face Nicolas, who thinks the victory belongs to him. Take a look at the following below.

Kengan Omega Chapter 107 will release on Thursday, 29 April 2021. Kenga Omega Chapters are released every Thursday. Try more updates here: Kengan Omega chapter 105 was released in the last past two weeks. That’s what the updates of the next chapter have to offer. Don’t miss the next chapter on Thursday after the latest one is released. You can also read Spoilers & Preview: Fairy Ranmaru Episode 4.

Kengan Omega Chapter 107: Where To Read?

You will be able to read Kengan Omega Chapter 107 online on MangaOne as soon as it releases.