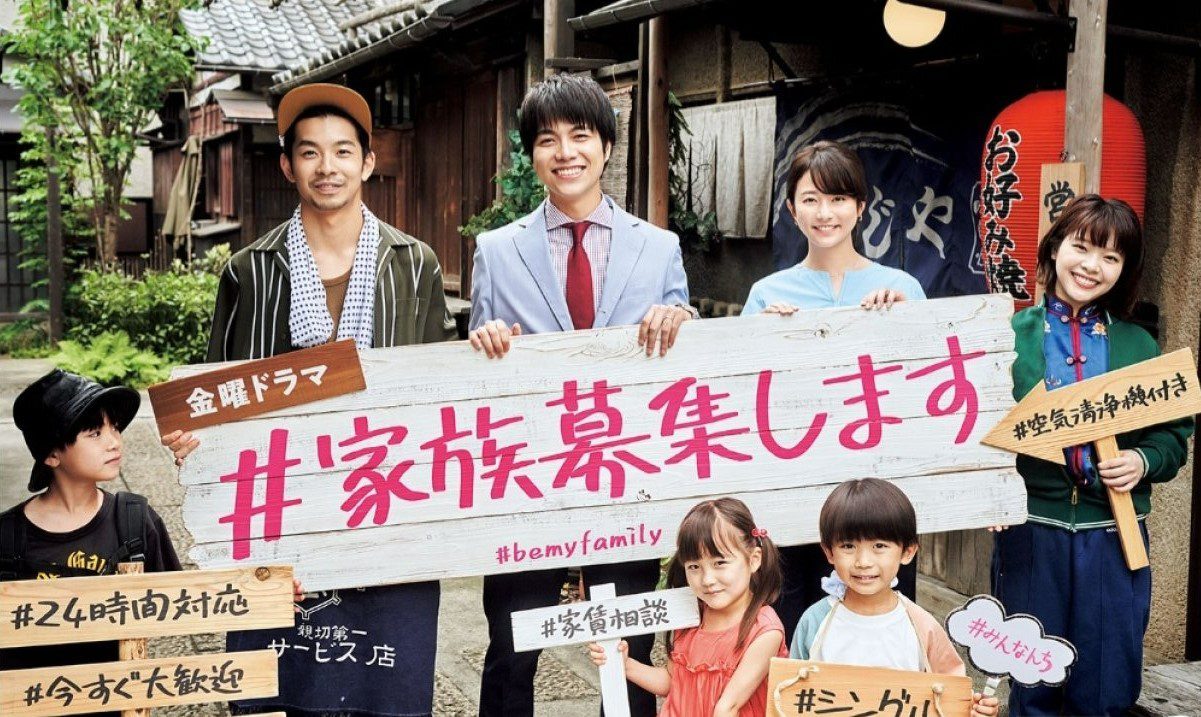 Kazoku Boshu Shimasu (2021) is an ongoing Japanese drama broadcasting on the TBS network. In this article, we will cover Kazoku Boshu Shimasu (2021) Episode 5 release date. The story follows the story where multiple single parents come together and live under one roof. But would they become a real family when each of them has different personalities and values? The j-drama starred Shigeoka Daiki, Kimura Fumino, Nakano Taiga, Kishii Yukino, Sato Haruto, Miyazaki Ririsa, Miura Kira etc. The recently become father, Shunpei Akagi, decides to live under one roof with three adults and three children after his childhood friend shared on SNS that # I am looking for a family, a strange post. How will those find the warmth of family when each one holds different values and views?

The j-drama Kazoku Boshu Shimasu (2021) is a family drama that is currently airing. Even with only a few episodes release, the j-drama is receiving pretty positive reviews from international viewers. It shows various stories filled with the warmth, struggles, and determination of single parents. Each episode would make you basked in different emotions; at one point, you would find yourself laughing and the other crying a river. The drama narrates the tale of four adults and their children who suddenly begin living together after an SNS post. However, living together does not seem that easy as each one has their own value and principles to follow. Will they overcome their barriers and become a true family? Or are they meant to fall apart?

Kazoku Boshu Shimasu (2021) Episode 5 will be released on 27 August 2021 at 10 pm JST on the TBS network. The drama premiered on 9 July 2021, and it contains 10 episodes in total. So far, 4 episodes have been released; each episode runs for 54min. The drama has been getting positive reviews for its simplistic and heartwarming storyline. With the only release of four episodes, you can easily binge-watch it if you have not yet. Every new episode of Kazoku Boshu Shimasu (2021) airs once a week, every Friday at 10 pm JST on the TBS network.

Domestic viewers can watch the drama on the original network. Unfortunately for international viewers, the j-drama is not available on any official streaming sites. But worry not. You can watch it on various unofficial sites such as Dramacool, Dramanice, etc. All four episodes with English subtitles are available on the unofficial sites. Thus, watch the j-drama Kazoku Boshu Shimasu (2021) and see how Akagi Shunpei and the other three adults will overcome the struggles of being single parents.

Kazoku Boshu Shimasu (2021) is a Japanese family drama. Have you ever thought of finding a companion who wants nothing but only becoming family with you? Well, that is what Kazoku Boshu Shimasu is about. One of our main protagonists, Akagi Shunpei, finds not one or two but three such companions who want to become family with him. The story follows a recently become single father, Akagi Shunpei. Becoming a single father seems to take a toll on him as Akagi struggles to raise his five-year-old son, Haru.

One day, he suddenly reunites with his childhood friend, Osanai Sosuke, who works at an old okonomiyaki restaurant, “Nijiya”. Osanai offers to live together with Shunpei and his son on the vacant second floor of Nijiya. To help Shunpei, Sosuke shares # Looking For Family, a strange yet humorous post on SNS. But surprisingly, the post attracts two single mothers, Momota Rei and Yokose Meiku. Whereas Momota Rei is an elementary school teacher, Yokose Meiku is a singer-songwriter.

Eventually, they all decide to live under the same roof. But the question arises how will four adults and three children with different personalities and values live together under one roof?

The drama starred various talented actors and not forget our little stars also. It cast Shigeoka Daiki as Akagi Shunpei, Kimura Fumino as Momota Rei, Nakano Taiga as Osanai Sosuke and Kishii Yukino as Yokose Meiku as main leads. Our little champions include Sato Haruto as Akagi Haru, Miyazaki Ririsa as Momota Shizuku and Miura Kira as Yokose Daichi. Besides them, the supporting cast members are Komatsu Kazushige, Maruyama Rei, Ishibashi Renji, Fukuyama Shodai, Kaneko Daichi, and Yamamoto Mizuki. Watch Kazoku Boshu Shimasu (2021) Episode 5 and see how those four adults and three children overcome the struggles of single parenthood. At the same, become a real family that stays together through all thick and thin.

Who does Zenitsu End Up With in Demon Slayer: Kimetsu No Yaiba?