“Shirogane is an even bigger Otaku than others for knowing all that anime names and release date.” That was one of the YouTube comments on Kaguya-sama: Love is War: Ultra Romantic Season 3. 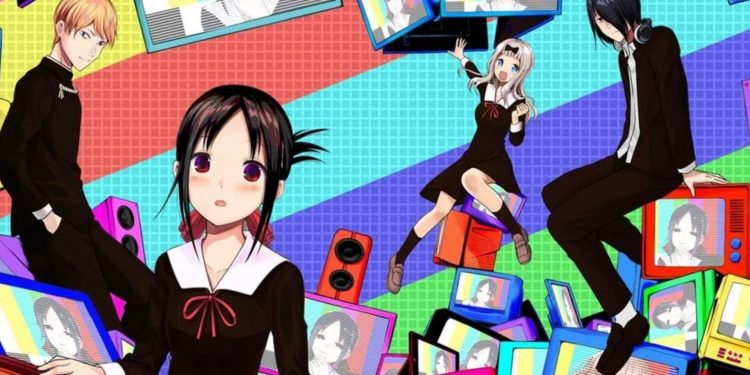 In all rom-com anime history, many are left unnoticed by some. But Kaguya-Sama Love is War isn’t on the same level. Every anime fan has at least tried watching the series, haven’t you? If not, then watch it soon because you won’t be disappointed with your day being filled with laughter!

Kaguya-sama wa Kokurasetai is a Japanese rom-com anime series. The manga series, written by Aka Akasaka, was at first serialized at Shueisha’s Seinen Manga magazine Miracle Jump in May 2015. The Manga series was then transferred to Weekly Young Jump in March 2016. And as of October 2020, the Manga has been compiled into 20 physical Japanese volumes by Shueisha and 18 English volumes by Viz Media.

The manga received an anime adaptation by Shueisha on June 1, 2018. The first season was directed by Shinichi Omata, written by Yasuhiro Nakanishi, the series was produced by A-1 Pictures. With several 12 episodes, the series aired from January 12 to March 30, 2019, broadcasting on MBS, Tokyo MX, BS11, Gunma TV, Tochigi TV, Chukyo TV, and TV Niigata. The second season was announced on October 19, 2019, and it aired from Aprile 11 to June 27, 2020. The second season received its world premiere before Japanese broadcast at Anime Festival Sydney on March 8, 2020.

About Kaguya-sama: Love is War

The Kaguya series is about how people change as they grow. The series starts with an introduction of Shuchiin Academy, where Miyuki Shirogane, the protagonist, leads the student council alongside Kaguya Shinomiya. As both are elite students, after they realize they are in love with one another, they both do not wish to be the first ones to confess. Both instead does every possible thing to make out a confession from each other. All this leads to a mess in their high school lives, which they embark on solving.

Also Read: Will Miyuki & Kaguya Break Up In Kaguya-Sama: Love Is War Chapter 248?

While the first two seasons has successfully finished with quite a satisfactory number of episodes, Kaguya-sama: Love is War is all set for a third season. When is it going to be released? Well, let’s find it out, shall we?

For all the fans patiently waiting for a new season, the wait is over. Kaguya-sama is out with a new season this new year. News has spread that A-1 Pictures will handle the production, while the anime series is set to release on April 2022.

On October 25, 2020, an original video animation episode and third season were concurrently announced for production during the “Kaguya-sama Wants To Tell You On Stage” special event. On October 21, 2021, it was revealed that the third season titled Kaguya-sama: Love is War: Ultra Romantic would preparedly premiere in April 2022 with returning staff and cast members.

Fans are getting excited, as well as impatient about ‘who will confess who?’ Will Season 3, Kaguya-sama: Love is War: Ultra Romantic hold the answer in it? Having a trailer for 10 whole minutes is like getting an OVA of their favorite series. Many fans have justified this thought and instead cannot thank more for the same.

“‘Momokan’ is getting a season 3”. How similar it is with Kaguya-sama: Love is War: Ultra Romantic, isn’t it? The teaser for the anime series starts with Ishigaki and Shirogane discussing ‘Momokan’s’ new season release date. They were discussing it in a way as if they are advertising their show. Doesn’t it look like to the other fans as well? The most hilarious part of the teaser starts when Chika Fujiwara starts asking Shirogane about ‘moe.’ Unable to handle a messy situation like this, Shirogane asks every person present in the room if they ever watched any anime and makes bold statements on their watches!

Shirogane makes us realize that having been an Otaku, even if someone has watched only one anime, is not something to be ashamed of. Everyone, with Shirogane taking the lead, welcomed Season 3 (Kaguya-sama: Love is War: Ultra Romantic) with utmost respect and joy. Having said that, even fans are patiently waiting and making countdowns for the release.

Kancolle Season 2: Everything That You Need To Know

Will Pop Step Die In My Hero Academia Vigilantes Chapter 118?