Fans of Kaguya Sama: Love is War have good news streaming today. The anime’s third season was announced recently and now, the Kaguya Sama: Love is War Season 3 release date is out! Romantic comedies never go out of trend because of anime like Kaguya Sama. The anime is filled with moe moments and hilarious mishaps caused between the two main characters. After the release of the first two seasons, fans have been yearning for the third season. Clearly, the anime has stolen the hearts of fans all over the world. Not only the Kaguya Sama Season 3 release date but several other new surprises have been revealed by the anime’s official Twitter page. Fans of Kaguya Sama, it’s time to get hyped up and feel the excitement!

Kaguya Sama: Love is War is adapted from the manga series written by Aka Akasaka. The manga was serialized in the Weekly Young Jump magazine and published by Shueisha. The manga was later translated to English by Viz Media. It was launched in 2015 and has been ongoing since. As of 2019, the first season of the anime was released, which was followed by the second season in 2020. Finally, the third season of Kaguya Sama has been announced and will be airing soon. Curious to know more? Here is everything we know about the anime, including the Kaguya Sama: Love is War Season 3 release date, new PV, Key Visual, and cast.

Kaguya Sama: Love is War is set in a typical high school but amidst not-so-typical students. Miyuki Shirogane and Kaguya Shinomiya are the president and vice-president of the student council in Shuchiin Academy. The two characters are crushing on each other hard, but they hold a similar ideology: the one to confess in a relationship becomes enslaved to the other. With this ideology engraved in their mind, the two are constantly developing strategies to make each other confess. The story follows the mishaps of their plans as the people around them get involved as well. Love is truly a war in Kaguya Sama.

The third season is titled ‘Kaguya Sama: Love is War – Ultra Romantic’. Spring of 2022 is sure going to be one sweet ride. A specific plot of Kaguya Sama: Love is War Season 3 has not been announced yet. Shuchiin High School Cultural Festival “Shinshinsai” is around the corner but neither of the two is ready to lower their pride. Be assured to experience more chaos from our main characters, wholesome romance, and entertaining comedy from the upcoming season too. 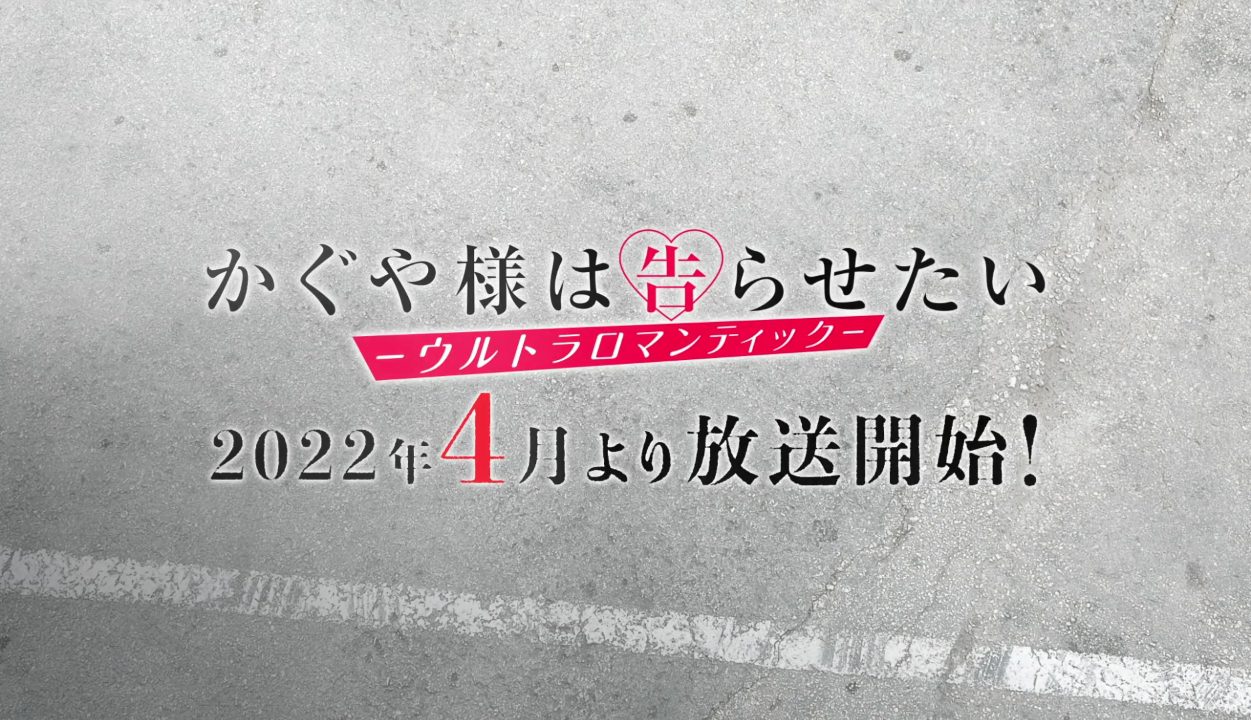 As we waited hopefully for the third season, A-1 Pictures answered our hopes. Kaguya Sama: Love is War Season 3 is set to be released in April 2022. The announcement was made on the anime’s official Twitter page on 21 October 2021. Spring of 2022 is sure going to be one sweet ride. A specific date is yet to be revealed, but we expect all the details to be made public soon as well. You can stay updated with the anime’s official website.

Right after the announcement, fans have shown a lot of support and enthusiasm towards the anime. Shinichi Omata is directing the upcoming season. The scripts have been written by Yasuhiro Nakanishi and Yukie Sugawara. Like in the previous seasons, Kei Haneoka is composing the music.

Along with the Kaguya Sama: Season 3 release date announcement, a new teaser was also released. In this 9 minute video, we see our favorite characters interact with each other.

Interestingly, this promotional video is an adaptation of Aka Akasaka’s promotional filler chapter that he drew three years ago to promote the first season of the anime. The video also announces the names of all the cast members who will be returning this season too. This includes Makoto Furukawa (Miyuki Shirogane), Aoi Koga (Kaguya Shinomiya), Konomi Kohara (Chika Fujiwara), Ryouta Suzuki (Yuu Ishigami), and Miyu Tomita (Miko Iino).

Is Lindsie Chrisley Campbell Still Married? What We Know