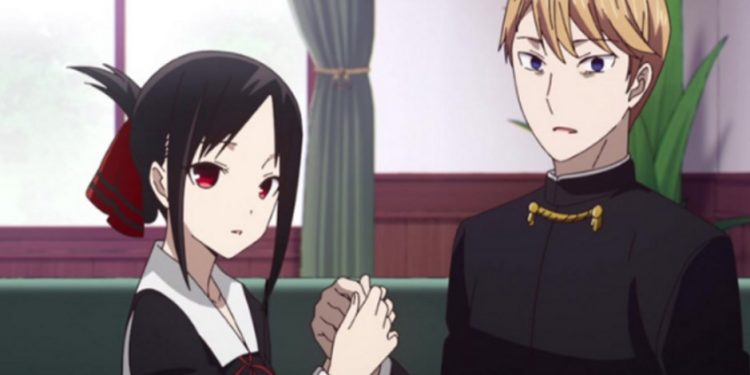 Kaguya Sama: Love Is War Chapter 250 Delayed, the mystery behind Kaguya and Miyuki’s breakup is about to be revealed. Miyuki couldn’t believe what he heard from Kaguya, but he had no say, and she dropped the call. He sits near the wall, wonders what is happening, and tries to think about what he can do before losing Kaguya. Kaguya has already explained her case. Miyuki heard footsteps, and when he looked back, he found that a strange lady had arrived.

He asks her, and she shows him a stack of millions of yen. The lady told Miyuki that he could accept it as a reward from Kaguya’s brother since he broke up with her. Miyuki can’t believe they have to pay him ten million yen to accept defeat. The strange lady adds that Kaguya’s brother compensates for Miyuki since he understood Kaguya’s case. Miyuki gets angry, and the lady reveals that it is ten million yen. He wonders if the lady is joking with him since money can’t buy love.

Miyuki realizes that Shinomiya always uses money to solve problems and tells the lady how things work. The lady told him she knew, and one of the Shinomiyas’ heads joined them. The guy admits that Miyuki is telling the truth, but it can’t be helped. Miyuki asks who he is and what he wants. That guy says that he is another Kaguya’s brother, Seiryu Shinomiya. Seiryu reveals that he is covering up for brother Oko since Oko has to deal with some errands. Miyuki wonders why he has to listen to the Shinomiya. Seiryu reveals that he wants to make Miyuki understand Shinomiya’s case.

Seiryo adds that he is giving him money to compensate for the breakup. He also talked about the famous war between the Shinomiyas and Shijos. The Shinomiya family agrees that Kaguya will solve their problem with the Shijo family. Miyuki realizes that Kaguya has to accept a marriage proposal. Seiryo agrees that Kaguya will marry the Shijo, but a single marriage can not settle the matter. He admits that he knew that the war would lead to something like that. But they were prepared, and Kaguya will end that war since she has accepted to get married.

Seiryo is confident that Miyuki will understand his case. He told Miyuki that Kaguya was the one who suggested giving away ten million yen. Miyuki knows that Kaguya will never stoop so low and involve money. But Seiryo thinks that ten million yen will convince Miyuki. Miyuki wonders what a lame joke is since such an amount will never convince him. Seiryo realizes that he is dealing with a hotheaded boy. Miyuki calculates and discovers that Ganan Shinomiya owns a 20% share of the Shinomiya Group, and it belongs to Kaguya when he dies.

Kaguya will get more than 400 billion, Miyuki realizes that ten million yen is child’s play. He reminds Seiryo that anything Kaguya owns will also fall under his name if they get married. Miyuki realizes that he is not that cheap to accept ten million yen, and Seiryo asks him to name his price. Miyuki reveals that 1 billion yen would be enough. Seiryo wonders if this brat knows what kind of amount is that. But he decided to settle things since Kaguya will never get married if Miyuki doesn’t get what he wants. He sent 1 billion yen to Miyuki’s account.

Kaguya-Sama: Love Is War Chapter 250 will be released on 20 January 2022. Hayasaka, who has recently arrived, has heard everything. Seiryo left with that lady and also left that ten million yen behind. Miyuki pretends to be happy, and Hayasaka wonders why Miyuki chose money over Kaguya. Miyuki believes that he is living a good life. Hayasaka asks him about Kaguya, and Miyuki reveals that he will never give on to his beloved one. Let’s look at Kaguya-Sama: Love Is War Chapter 250 official details.