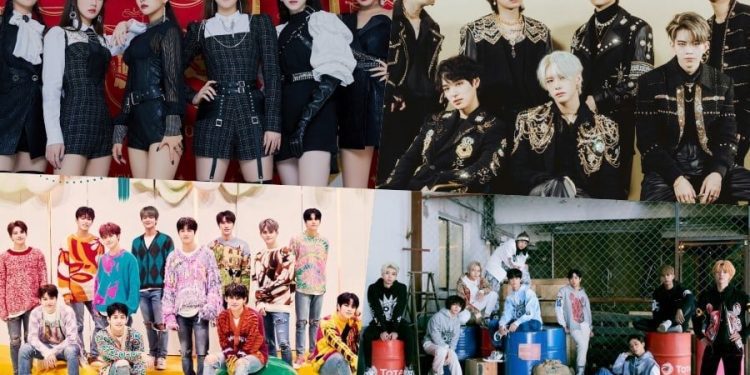 Kpop Debuts And Comebacks To Look Forward To In January 2022!

With the beginning of January 2022, there are so many things to look forward to, and that includes the K-pop comebacks and the debuts. This month alone has so many important dates to mark on as the comeback season is finally on. And with our favorite idols coming back, some new ones are on their way to start their journeys. Right from the start of the week, the calendar is already starting to fill up. Having so many K-pop comebacks and debuts this month, here are is a reminder for you to not miss out on the important things.

While with the new year, SM Entertainment has already debuted its new girl group project on January 1, 2022. Looking at the success of ‘Super M,’ SM has called all of their girls on top together. Consisting of BoA, Girls’ Generation’s Hyoyeon and Taeyeon, Red Velvet’s Seulgi and Wendy, and aespa’s Karina and Winter. ‘GOT’ aka ‘Girls On Top’ made their stage debut with an online concert, releasing their single ‘Step Back.’ While some of you might’ve missed the debut, there are still a lot of idols to catch up with. They certainly help make the new year a bit happier!

Here Are The Kpop Comebacks and Debuts To Look Forward To In January 2022!!

HyunJun Hur is all set to make his comeback on January 3, 2022, with the single ‘Don’t Let Me Down.’ After leaving the boy group ‘The Boyz’ in 2019 due to health conditions, HyunJun went on to make his solo debut on August 14, 2020, along with starting his own label known as Dia Note. Releasing a 32-second teaser video for his upcoming single. He can be seen roaming around in the snow and some stills of him performing a power-packed choreography. The video will premiere on his Youtube channel at 6 PM KST.

TOP Media’s ‘UP10TION’ is all set to make its comeback with a mini-album on January 3, 2022. The group consisted of ten members, Jinhoo, Kuhn, Kogyeol, Lee Jin Hyuk, Bitto, Kim Woo Seok, Sunyoul, Gyujin, Hwanhee, and Xiao are working on their 10th mini-album titled ‘Novella.’ The album will have six tracks, with the title song being ‘Crazy About You.’ A teaser for the lead single has been released where the boys can be seen performing one of their amazing choreographies as they see the time passing them by in other stills.

The ‘Girls Planet 999’ girl group ‘Kep1er’ is all set to make their debut with the single ‘WA DA DA’ along with their first mini-album ‘First Impact’ on January 3, 2022. The girl group consists of Choi Yujin, Shen Xiaoting, Sakamoto Mashiro, Kim Chaehyun, Kim Dayeon, Ezaki Hikaru, Huening Bahiyyih, Seo Youngeun, and Kang Yeseo. Releasing the teaser for the music video, the girls can be seen performing the choreography on the playful beats.

Also Read: Male K-pop Idols Who have Appeared on TC Candler’s list of ‘100 Most Handsome Faces’ in 2021

It’s been years since we’ve heard Eric Nam’s name in the comeback list. Announcing through Twitter that he’ll be making a comeback on January 7, 2022, Eric revealed that his new album “There And Back Again” is available to pre-order already. He has also released two lyrics videos from the album, giving fans a sneak peek into the upcoming bundle of joy.

Nobody can ever get enough of ENHYPEN, and the boys are coming back again with their new album’ DIMENSION: ANSWER’. Making their comeback on January 10, 2022, the album tracklist is already out. The full-length album will have eleven tracks, along with an intro and an outro. All the information about the comeback is being updated at ENHYPEN’s Twitter account.

Continuing as a six-member girl group, Momoland will be making its comeback on January 14, 2022. The girls released a single “Wrap Me In Plastic,” collaborating with CHROMANCE in February 2021. While their company has announced the day of a comeback, no teasers stills or videos have been released yet. Being one of the most anticipated comebacks, to begin with, Momoland is being very secretive, but we hope to get some updates soon.

‘MAMAMOO’s Wheein is all set to make her comeback with her second mini-album on January 16, 2022. Nearing the release date of her album titled ‘WHEE,’ the teasers are already out. And they are like a treat to the eyes. As the video teaser shows, the concept will be all white, and she can be seen wearing all white and looking exceptionally beautiful in the teaser. A story film for the album will be out on January 7, 2022, followed by the music video teasers two days before the album’s release.

CJ E&M’s Fromis 9 is also coming back with its fourth mini-album this month. The nine-member group consists of Roh Ji Sun, Song Ha Young, Lee Sae Rom, Lee Chae Young, Lee Na Gyung, Park Ji Won, Lee Seo Yeon, Baek Ji Heon, and Jang Gyu Ri came together through the survival show ‘Idol School’ in 2017. ‘Midnight Guest’ will be coming out on January 17, 2022. A concept trailer for the album has also been released, where the girls can be seen sneaking out of their rooms late at night.

A few days ago, Astro’s JINJIN & ROCKY went on to announce that they will be making their comeback together. Being the rap line of the boy group, JinJin and Rocky will be releasing the album ‘RESTORE’ on January 17, 2022. While this is not the first sub-unit of Astro to debut, fans are very much excited for the album. The title track of the song is ‘Just Breathe.’ And having five tracks, the album has collaborations with ‘Weki Meki’ too.

IST Entertainment’s boy group ‘VICTON’ will be making its comeback with its 3rd single album. The boy group consisted of seven members, Han Seung Woo, Kang Seung Sik, Heo Chan, Lim Se Jun, Do Han Se, Choi Byung Chan, and Jung Su Bin made their debut in 2017. The album titled ‘Logo Motion’ will be coming out on January 18, 2022. Releasing a 13-second video teaser recently for the title song ‘Chronograph,’ the fans are already hyping up for the comeback.

One of the most awaited comebacks, ‘MAMAMOO’s Moonbyul, is finally making her comeback with her 3rd Mini Album. ‘6equence’ will be released on January 19, 2022. As announced on Twitter, the release schedule of the album has been announced. Starting from January 6, 2022, and releasing the album cover, the teaser for the music video will be out on January 18, 2022. Two singles from the album are already out for pre-release. Artists like Mirani and Seori are also collaborating on the tracklist.

Cube Entertainment’s ‘Pentagon’ is all set to release its 12th mini-album this month. The boy group consisted of nine members, Jinho, Hui, Hongseok, Shinwon, Yeo One, Yan An, Yuto, Kino, and Wooseok. The boys of ‘Pentagon’ are set to release [IN: VITE U] on January 24, 2022, at 6 PM KST. As announced through Twitter, the album will have six tracks, with the single ‘Feeling Like’ being the title track. Having songs like ‘One Shot,’ ‘The Game,’ ‘Call My Name,’ ‘Sparkling Night,’ and ‘Bad,’ the fans are already looking forward to what’s coming for them.

MLD Entertainment’s T1419 is all set to make its comeback on January 10, 2022, with the album “BEFORE SUNRISE Part 1”. Epik High and AB6IX are coming back with their new albums on January 18, 2022. Meanwhile, ITZY will be releasing the ‘NOT SHY’ English version on January 22, 2022. SATURDAY will also be making releasing their single album “Only You.” U-KISS’s Soohyun and Hoon will be making their comeback as the group’s first sub-unit with the single “I Wish” on January 27.