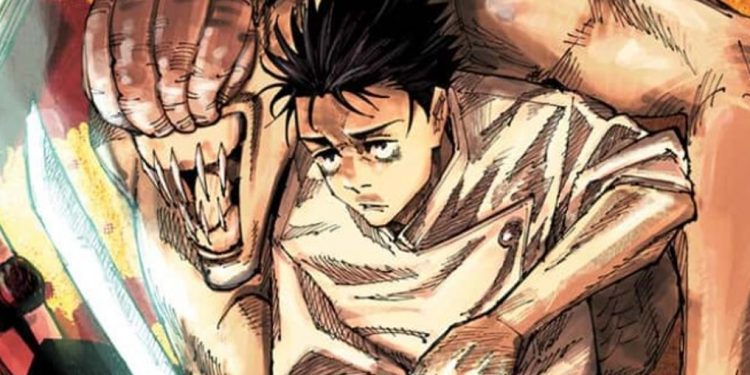 Megumi vs. Reggie continues in Jujutsu Kaisen Chapter 171. Reggie decided to block Megumi’s path, knowing that Hanezoki got killed. But Megumi wanted them to let bygone be bygone, and Reggie refused to leave. Jujutsu Kiasen has returned from a weekly break then takes another break this coming weekend. In Jujutsu-Kaisen’s latest chapter, Reggie asks Megumi if he has that thing, but Megumi unleashes different cursed spirit animals and uses them against Reggie. Megumi summons his blade, but Reggie uses webs to capture the cursed animals and block Megumi’s sword.

Reggie reveals Contracrual Re-Creation and sends flying blades toward Megumi, who tossed them away. He realizes that the rabbit Shikigami is different from the others and that Megumi uses water attacks to combine them. No matter how many he killed, they will keep appearing. Reggie asks Megumi if he has learned about his cursed technique since he uses water as a countermeasure. Megumi explains that and explains how he learned about Reggie’s techniques. Reggie accepts that he recreate the contract and show Megumi what he can do. Megumi decided to escape after summoning a giant owl.

The giant owl flies away with Megumi from the battlefield, and Reggie wrote a contract that allows him to summon a bike. Reggie sings his favorite song while chasing Megumi. They are at the Gymnasium, and Reggie wonders if Megumi has entered the Gymnasium, luring him inside. Reggie wonders what his next approach is since he is tired of chasing his target. Megumi landed on the ground and noticed that he needed a huge space like that. Reggie joins him and wonders what he is plotting as a sorcerer. He reminds Megumi that a sorcerer is a con artist.

Megumi realizes that no one will hold back, and Reggies attacks Megumi using two delivery trucks. But Megumi slides under those trucks and appears behind them when they get crushed. It was too late since Reggie used a pot of flowers and hurt Megumi’s head. Megumi jumps back and wonders if Reggie used a Daikon to hit him. Reggie summons a carrot that breaks and releases a blade that hurts Megumi’s arm. Megumi loses balance, and Reggie treats him like a punching bag after landing a massive straight kick. He reveals that everything that he creates acts like Shikigami.

Reggie reveals that the paper he uses was for three days with an oil treatment at the Five-star Japanese inn, Starry Sky. He feels like his body is reborn after taking a hot spring for two days. Reggie asks Megumi about his injuries and the multiple Shikagami; he believes that Megumi might be tired. Megumi realizes that he can summon multiple Shikagamis, but he prefers Max Elephant. Reggie is glad that Megumi is limited in every attack, and it will be easy to take him out. Megumi reminds Reggie that he has many reasons that prevent Reggie from killing him.

Reggie asks Megumi why he is not cooperating with him, and if he gives him his points will get an easy death. He also explained his knives techniques, and Megumi admits that barrier techniques are difficult, but he can use the area as his Domain. Reggie gets worried if Megumi can do that, and Megumi uses Domain Expansion: Chimera Garden Shadow that surprised Reggie. He wonders if Megumi is the sorcerer at that level. Megumi reminds Reggie that he never reveals his true powers and techniques, can use big moves during Domain Expansion: Chimera Garden Shadow.

You will be able to read Jujutsu-Kaisen-Chapter 171 online on Shonen Jump’s official website. Jujutsu Kaisen will return since chapter 171 will get delayed this coming weekend. Still, the recent chapters, updates, and latest news are serialized on VIZ Media & Shueisha’s online magazine every Sunday. Let’s meet when Jujutsu Kaisen Chapter 171 is released.