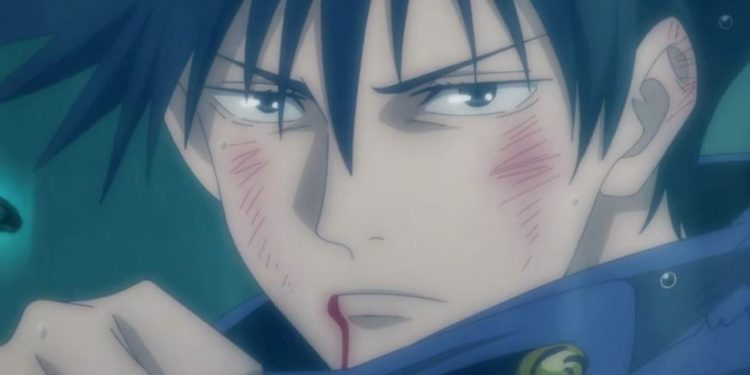 Jujutsu Kaisen Chapter 171 reveals Megumi vs. Reggie part two. Reggie jumps in front of Megumi, who is not interested in fighting. He wants to avenge Hanezoki, who Fumihiko killed. Megumi thought Reggie would cooperate since the battle was over, and Reggie refused to give up. Jujutsu Kaisen has returned from a break then continues with its weekly schedule. Jujutsu-Kaisen’s latest chapter reveals Reggie talking with Megumi about that thing. But Megumi uses Shikigami against Reggie, who jumps back. Megumi summons his sword, but Reggie unleashes webs to capture Shikigami and deflect Megumi’s sword.

Reggie uses Contracrual Re-Creation that sends flying knives at Megumi. But Megumi breaks those knives. Reggie admits that those rabbit Shikigami are rare and learns that Megumi uses water strikes to combine them. He knows that even if he killed all of them, they would still revive. Reggie wonders if Reggie has predicted his cursed technique because he uses water as a countermeasure. Megumi explains how he learned that and exposes Reggie’s techniques. Reggie agrees that he recreates the contract shows Megumi.

Megumi summons the owl after realizing that they are in a small area. He told Reggie that he was leaving, and the giant owl transported him to his destination. Reggie reveals a contract that allows him to summon any ride he wants. He summons a bike and pursues Megumi while humming his favorite song. Later they both arrive in front of the Gymnasium, but Megumi enters the Gymnasium from the top. Reggie wonders if Megumi is playing games with him and believes he might plot something. But he has another plan that will help him to step in chasing Megumi. Megumi land inside the Gymnasium and realizes that it is a big area for a battle.

Reggie arrives, wonders what kind of sorcerer Megumi plots something, and reminds him that a sorcerer is a con artist. Megumi realizes they will not hold back, and Reggies smash Megumi using delivery trucks. But Megumi crotches while sliding under the trucks and appears from the other side. The trucks crutches with the wall. But Reggie uses a curse glass pot to smash Megumi’s head. Megumi turns around and believes that Reggie used Daikon against him. Reggie uses carrots that turn into knives when they move at full speed and pierce Megumi’s arm.

Megumi loses his footing, and Reggie smashes him like a punching bag after landing massive kicks. Reggie reveals that everything that he summons acts like Shikigami. Reggie reveals that the document he was using was created three days ago at Five-Star Japanese inn, Starry Sky. using oil treatment. He is glad that his body is reborn since he enjoyed the hot spring for two days. Reggie questions Megumi about his wound, the multiple Shikagami, and thinks Megumi can’t keep up with him since he might be tired. Megumi knows that he can use multiple Shikagamis, but he uses Max Elephant.

Reggie is glad that Megumi’s attacks are limited, and it won’t take him time to kill Megumi. Megumi reveals that he has many ways to stop Reggie from killing him. Reggie asks Megumi why he is not following his orders and dying in peace. He also talked about the knives techniques, and Megumi realizes that the barrier techniques are hard. But the area will act as his Domain. Reggie wonders if Megumi can pull that one. Megumi unleashes Domain Expansion: Chimera Garden Shadow, and Reggie is shocked. Reggie can’t believe that Megumi is a sorcerer who can surpass his limits.

Jujutsu-Kaisen-Chapter 171 will be released on 16 January 2022. The manga chapter’s 171 returns this coming week. Megumi believes that his Domain Expansion: Chimera-Garden Shadow is enough for him to defeat Reggie. Megumi vs. Reggie continues in the next chapter. Let’s look at Jujutsu-Kaisen Chapter 171 official details.

Also Read: The Faraway Paladin Season Finale Explained: Will There Be A Season 2?