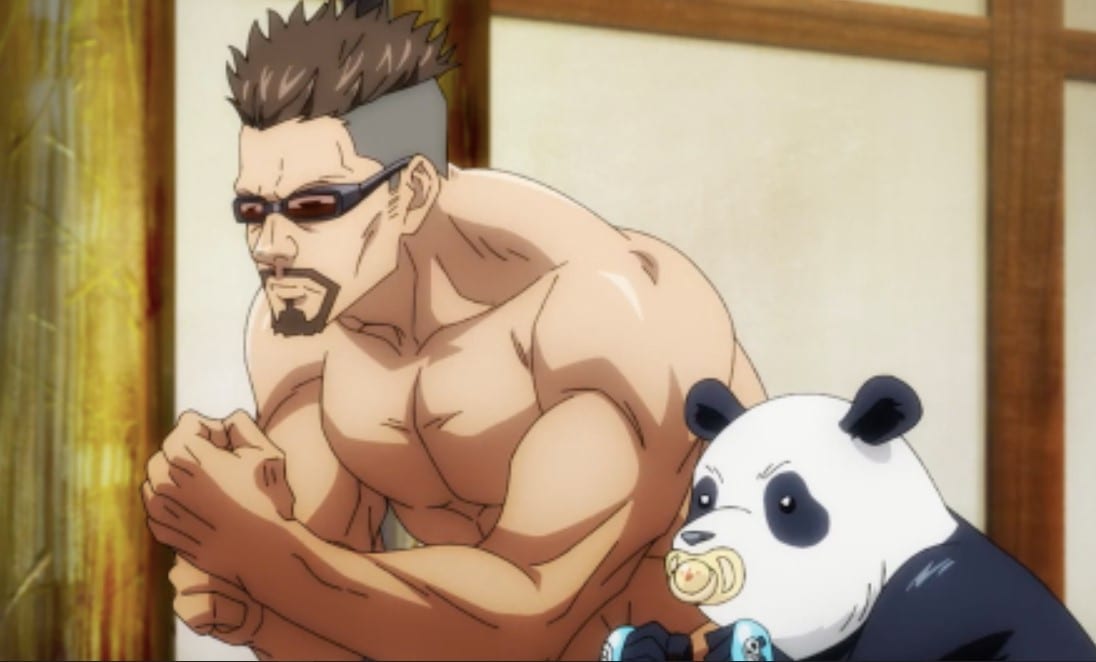 Jujutsu Kaisen is taking two weekly breaks and will return on the date mentioned on the weekly schedule below. The chapter is titled Even Pandas, Yag is looked at somewhere. He remembers the first time he met with Panada; meanwhile, principal Gakuganji wonders if a cursed corpse can operate independently to a greater degree than other manipulation techniques. He realizes that it eats the cursed energy that a sorcerer gives it as a power source.

Yaga realizes that the High-up are trying to use Panda and officially impose an indefinite restraint upon Panda. Gakujangi told Yaga to tell him everything about Panda. Yaga decided to hide the truth, and he replies that he knows nothing about Panda. Gakujangi wonders how Panda was made Yaganhad a flashback where he met with a talking dog. That day he told the dog that everyone is worried about how gloomy he is. But he told them to cheer him up, and the dog comments that he is a genius.

Yaga told the dog not to worry since Master Tengen protects the forest. But even if he is not around, his mother will always come, and he will be fine without him. Yag left the Dog and other talking animals that told him that they would miss him. Meanwhile, Panda is with Kusakabe. Kusakabe frees Panda from his rope, and Panda asks him if he is sure of what he is trying to do. Kusakabe told Panda that he must keep it as a secret that he freed him. He reveals that Panda was captured as bait to lure out Yaga.

Kusakabe told Panda to leave, and he said he owes Yuga. He remembers how Yuga helped him in the past. Later Yuga went back to the forest and reunited the talking dog with his mother. The dog told his mother that ”aren’t I a genius” and his mother realizes that it is his son. He pictured him when he was a human and hugged him, calling him Takeru. Kusakabe was also there that day, and he talks with Yuga. Yuga told Kusakabe that he hates to do this.

But he understands that he is not supposed to get out of the independent cursed corpse that exists. Kusakabe apologized and said that living without his sister is impossible. Yuga wonders why Kusabe was apologizing. He met with Toge, who asks him where he is going without any cursed corpses. Yuga replied that he would see his and Toge told Yuga to allow him to tell him how to save himself since he got the death sentence. Toge asks Yuga to tell him how to make fully independent artificial cursed corpses.

Yuga comments that Toge has toughened up since Satoru is not around. Toge replies yes, and Yuga said he is with a veteran sorcerer. Later Yuga met with Gakuganji, who was playing his guitar. Gakuganji attacks Yuga and puts him to sleep, and he told Toge to leave since he will handle the rest. Yuga wakes up and reveals that in three months, the soul will self-sustaining cursed energy. Gakuganji wonders why Yuga is telling him now. Yuga comments that it is a curse from him to the principal.

Panda arives and saw that Yuga had been brutally beaten. Panda passes Gakuganji and heads to take care of Yuga. Gakujangi asks him why he ca not fight and if he doesn’t hate him. Panda reveals that he is not like humans. Humans’ behavior doesn’t bind Pandas and Yuga, and the principal was not on bad terms. Panda thinks that Gakujangi is just following the orders from the high-up. Gakujanji told Panda that he is like a fallen knife, and he must remember that even Pandas cry just like humans.

Black Clover Chapter 292: Spoilers and Where To Read Online?