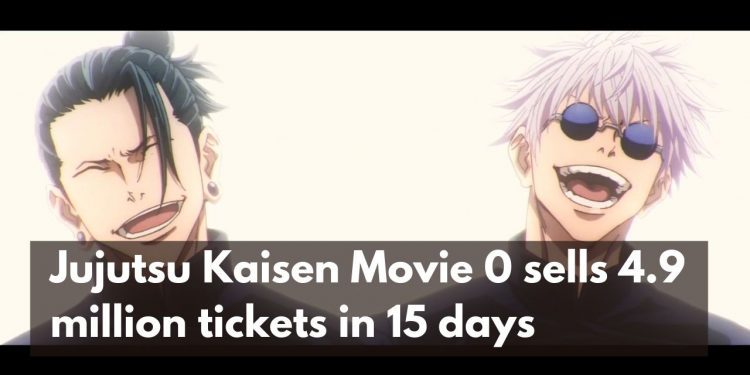 Jujutsu Kaisen is known for its adventurous plot and characters from the day it released its first season. Each character has its own backstory and originality. With the amazing plot, their manga sales have gone up drastically. With its immense popularity, the recent movie Jujutsu Kaisen 0 has sold more than 4.9 million tickets alone in the first 15 days of its release. Thus Jujutsu Kaosen Movie 0 has proved to have given good competition to the other releasing anime films.

Jujutsu Kaisen 0 was released on December 24, 2021. This is a record for an anime film. Evangelion: 3.0+1.0: Thrice Upon A Time, which made $52.5 million in its first 21 days and is on its way to a final field workplace total of 10.22 billion yen (approximately 88 million dollars), is still trailing far behind. Not only that, the hype has also led to an increase in its manga sales. According to the latest data, Jujutsu Kaisen Volume 18 (+Special Edition) has sold 531.365 copies during its second week (December 27 to January 2); a total of 1.321.226 copies sold. Further, this data will be added to the number of January’s Jump Volumes charts with the rest of the releases from the next month.

The movie release has also given rise to Gekij-ban Jujutsu Kaisen 0 café pop-up in various locations of Tokyo (Harajuku and Shinjuku). Other than that, the new cafe will open up in Osaka and Nagoya from January 14 to March 27. Topping the box office for its debut weekend, the film brought in 2,694,128,150 yen (approximately $23.5 million) in its first three days of release. While supplies last, each member of the movie’s audience receives a copy of the book “Jujutsu Kaisen #0.5 Tokyo Prefectural Jujutsu High School.”. There are 5 million booklets being distributed by theatres. Additional IMAX screenings are available for the film.

To maintain the Hype, the blockbuster movie has released another new video on the official site of Jujutsu Kaisen. In the new video, we see “Sakayume,” the concluding theme song for King Gnu. A precursor narrative from Gege Akutami’s manga series, Jujutsu Kaisen 0: Tokyo Prefectural Jujutsu High School, serves as the basis for the film, which is animated by MAPPA and distributed by TOHO. It was released in January 2021 by Viz Media, and the manga summarises the story.

Yuta’s childhood buddy, Rika Okkotsu, who was tragically killed in a vehicle accident, haunts him to this day. She’s no longer the sweet, innocent girl he called his lover in her ghost identity. To protect him, she takes on a monster form since she is cursed.

Since he can’t control Rika’s enormous power, Yuta can’t stop the damage caused by his curse. The world’s defenders, the Jujutsu Sorcerers, who are adept at dealing with Cursed Spirits like Rika, thus find and apprehend Yuta. Satoru Gojo presents an alternative answer to Yuta’s wish to die alone, ensuring that no one would be harmed in the process.

Gojo sends Yuta to Jujutsu High in order to acquire control of Rika and use it to benefit others. While there, he studies with other aspiring sorcerers. Yuta’s new classmates, Maki Zenin, Toge Inumaki, and Panda, are all teaching him jujutsu and combat techniques.

Having finally found a place at Jujutsu High School, Yuta is overjoyed with his newfound sense of self-worth. As time passes, he becomes more comfortable with his abilities. Yuta only discovers that the dangers of the Jujutsu World extend beyond the dreadful ghosts that haunt the world after the events of the previous chapter.

JJK is a Japanese manga series written and illustrated by Gege Akutami. The Jujutsu Kaisen chapters have been released in 18 tankobon volumes by Shueisha. As of December of 2021, the most recent edition has been released.

Since December 2019, Viz Media has published Jujutsu Kaisen in print. Manga Plus has been translated into English by Shueisha. During the months of May 2019 and January 2020, Ballad Kitaguni issued two novels. MAPPA will air a 24-episode anime TV series on MBS from October 2020 to March 2021. Crunchyroll made an English dub available for streaming outside of Asia in November 2020. April 2021 marked the release date of the anime’s original score release.