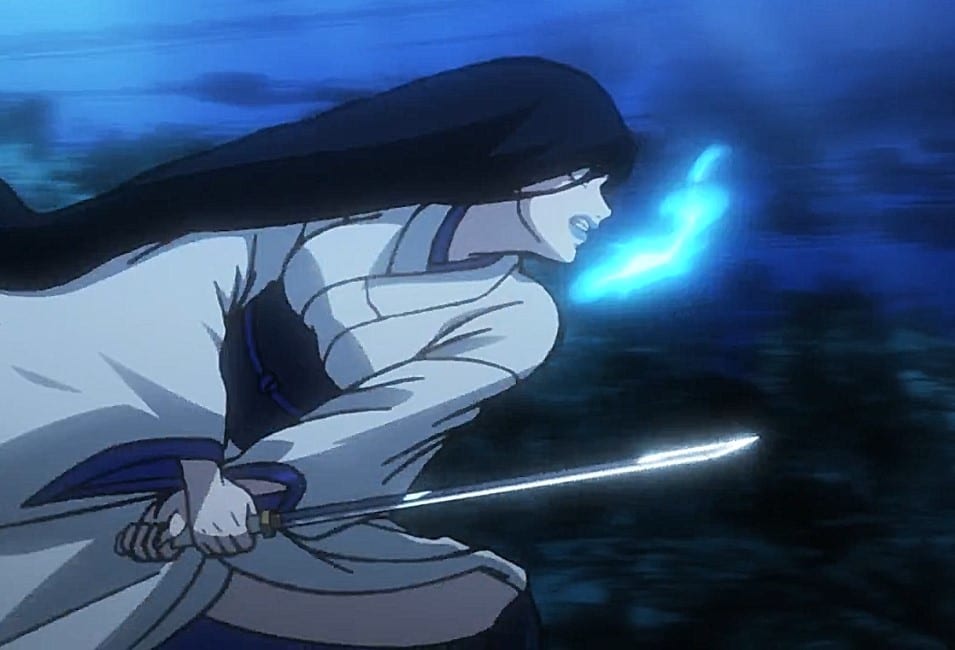 Sawa has transformed after witnessing Asahi getting stabbed in front of her. Asahi got stabbed by a monster that wanted to make a deal with Sawa. The episode is titled File 642, The Witching Hour. Sawa and the monster exchange sword slashes. Asahi is lying on top of a pool of her blood. Sawa wonders if Ashai is dead or not. Sawa reminds the mosnter about their deal and that the monster lied to herself. She calls the mosnter by her name that she is Tsuki. Tsuki told Sawa to give her a more entertaining fight.

She swings her claws and misses Sawa, who jumps up. Sawa reminds Tsuki that she said the truth isn’t what’s important. She comments that even if everything was a lie, she would keep on dreaming. Tsuki replies that Sawa will lose herself in her dream. Sawa attacks, but she falls into Tsuki’s trap. Tsuki stod on top of her sword as Sawa tries to wield it. She mocks Sawa about the inner demon Yukimura within her body. Tsuki wants Sawa to unleash the true powers of demon Yukimura during the battle.

Previously on Joran: The Princess of Snow and Blood Episode 8

Saewa gets furious and attacks Tuski with a white flaming sword and slashes. Tsuki continues to dodge Sawa’s attacks while mocking Sawa’s strength. She managed to grab Sawa’s hand and throw Sawa’s sword away. After pinning Sawa with the ground, she strangles Sawa, who tried to escape. Before she draws her soul out, Sawa kicks Tsuki and frees herself. She decided to exchange blows with her using hand-to-hand combat. Sawa landed a dropkick that sends Tsuki flying, and she smashes with a wooden building nearby.

When Tsuki is recovering, Sawa runs towards her sword and unpin it with the ground. Tsuki came back from the explosion and decided to take the fight into the sky. The two clashed mid-way, but Sawa got a cut on her shoulder. They both landed a double-hit combo that turns them into a different position with one knee on the ground. Tsuki didn’t feel anything when Sawa cuts her. She turns around with aiming to behead Sawa, but she drops her sword, and blood states pouring all over her body. 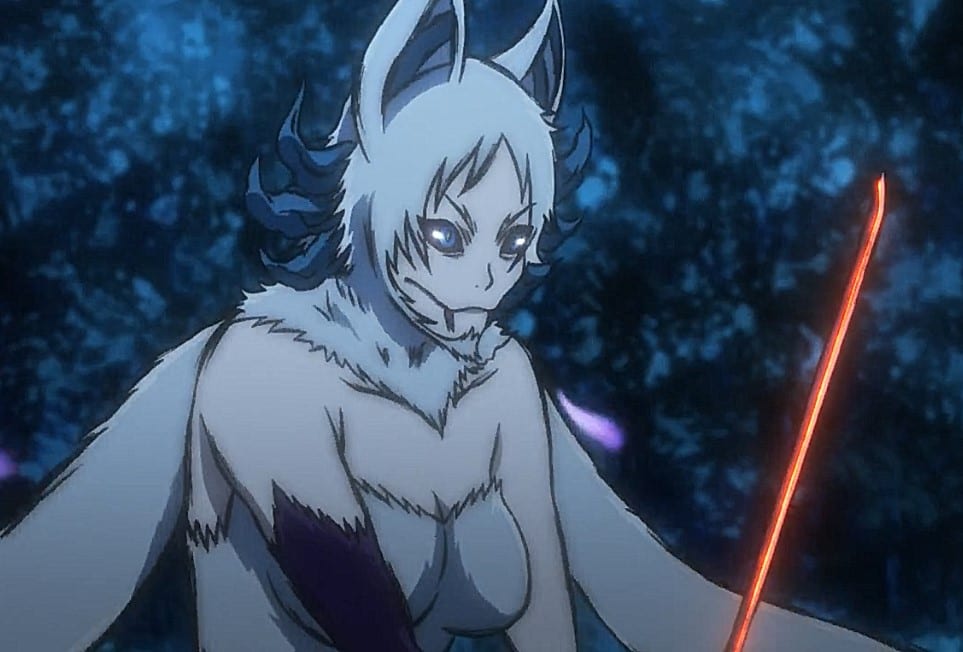 Tsuki thought that she was the one who landed the blow, but it was the opposite. The cat that possessed her gets out of her body, and she turns back to her human. After returning to her human form, Tsuki collapses. Sawa heads near Tsuki, and it is Makoto Tsukishiro who has been scheming to kill her all over. She told him that it is over. Makoto laughs, and she points her sword at his head, asking him what’s so funny. Makoto replies that he thought he didn’t need to face the truth.

He also said the more you try to hide the truth, the more complex the fact attempts to get out. Sawa asks him why he murdered a helpless teacher and killed Asahi. She asks him if he is happy to ruin her life. Makoto replies that he is happy and he is the center of Sawa’s world. Sawa told him that it is time for him to face death, and he replies that it is the Yukimura he knows. Makoto falls on his knee and comments that it will be an honor to die by Sawa’s sword. Sawa gets furious and wields her sword, preparing to kill Makoto.

But she to her sword after remembering what Asahi told her in the past about killing. Sawa decides to spare Makoto, and he realizes that she has become soft-hearted. Makota begs Sawa to come back. But a giant black hawk appears and stabs Makoto with its claws, and he died instantly. The hawk flies away, and Sawa realizes that death will keep on following her everywhere she goes. Later Jin arrived and took the dead bodies along with Sawa, who is unconscious. He took Sawa to a safe place, and she talks about Asahi.

Joran: The Princess of Snow and Blood Episode 9 Release Date