Joon Hyuk is up for the presidential candidacy but he is rejected by the Blue House. First, Jae Hee thinks that it might be because of the video but it is because of his father. 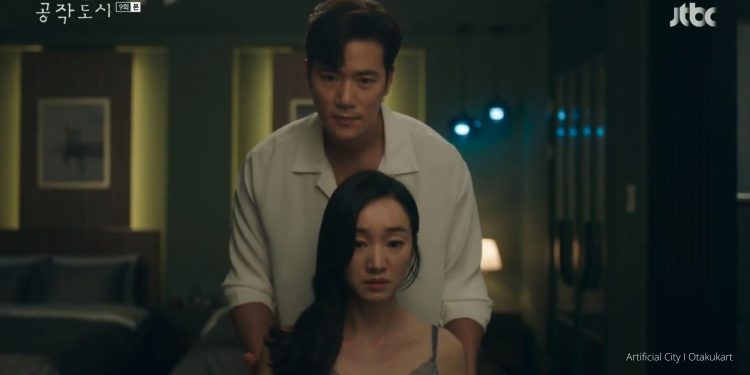 Many scandals are being uncovered in the ‘Artificial City’ recently. First, Han Suk and Pil Seung find out that Joon Hyuk is not Hyun Woo’s father. Then when Jae Hee thinks that everything is fine, she receives a video from Mr. Choi. In the video, Joon Hyuk is seen with a prostitute. In ‘Artificial City’ Episode 12, Joon Hyuk’s reason for being rejected by the Blue House will be revealed.

After Jae Hee and Joon Hyuk visit the victim’s family at the hospital, a new article is published. People who were blaming Joon Hyuk for his father’s company’s tragedy are now in favor of his presidency. While all this is going on, Lee Seok is not comfortable living at a place offered by Jae Hee. So, she decides to move into another place and continue her plan to get justice for her dead friend.

Till now, we have seen that Han Suk and Pil Seung find out that Joon Hyuk is not Hyun Woo’s father. When Joon Hyuk takes a paternity test, Han Suk swaps the real test for a fake one. This saves Jae Hee from being discovered by her husband. However, her father-in-law is upset about her lie as he loves Hyun Woo very much. He tells Han Suk that if anything goes wrong with Joon Hyuk, he will kick out Jae Hee. Unaware of this, Jae Hee is working hard to make her husband the next president, and Han Suk is helping her.

When everything seems to be going well, a new video of Joon Hyuk gets leaked. In the video, he is seen with a prostitute. Now it is upon Jae Hee to clean this mess. After her anniversary dinner, she tracks down the employee who sold the video and abducted him. She takes him to Mr. Cho and forces him to testify against him. To save his position, Mr. Cho helps Jae Hee take down the video. Later, Lee Seol visits her friend and finds out that Jae Hee knows everything about her plan.

Joon Hyuk Is Rejected By The Blue House

After Mr. Choi is arrested for foreign investments, Jae Hee visits him at the police station. Then she asks him why he leaked the video. However, he did not seem to take it very seriously and tell her that it was nothing more than a prank. There is another topic that he is interested in that is why Joon Hyuk is rejected by the Blue House. Jae Hee goes back to her mother-in-law’s house and searches previous records. Finally, she finds out that Joon Hyuk is rejected because his father was involved in the Hyeongsong-Dong tragedy.

Even with a big setback, Jae Hee plans to make her husband the president. After the news about the Hyeongsong-Dong incident breaks out, Jae Hee and her husband goes to the hospital to apologize to the victim’s families. However, reporters follow them and keep asking for comments. The victim’s guardian knows that Jae Hee is doing this to form a good image in front of the reporters. So, she tells her to drop the act. While leaving, they greet each other with a smile, and this gives the media what they want. After this, Jae Hee asks Joon Hyuk to talk to his father and ask him not to cause any more problems.

The ‘Artificial City’ Episode 12 will be released on 13th January 2021. In the upcoming episode, Lee Seol decides to tell Jae the truth about Young Joo and that she was her roommate. Although she thinks that Jae Hee will help her after hearing the truth, this might be the biggest mistake she makes. After dropping off Jae Hee, Joon Hyuk visits his parents. He makes a scene in the house by punching the villa manager. Joon Hyuk does all this just to prove that he will not be manipulated or taken advantage of.

Where To Watch ‘Artificial City’ Episode 12?