JoJo & Dexter Darden Are Engaged! Relive the romance of these love birds 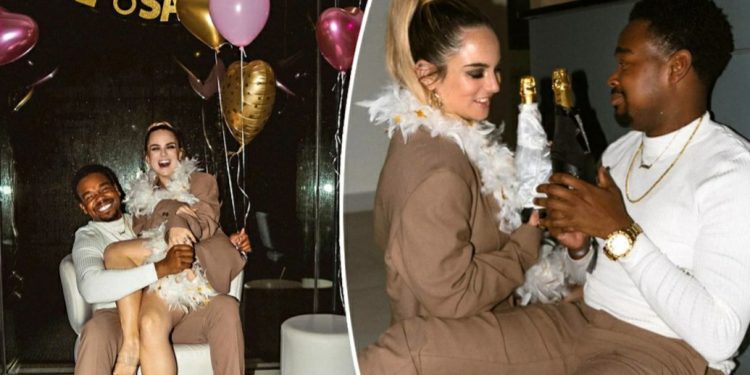 Do you know that JoJo & Dexter Darden are Engaged? What do we know about their sweet relationship timeline? Before discussing things about their engagement, let’s talk about them at first. JoJo is a famous American singer and lyricist. She has released some amazing albums which topped the charts many times. Some of those albums are- Trying Not To Think About It, The High Road, Mad Love, Good To Know, December Baby, Can’t Take That Away From Me, and a few more. She hasn’t limited herself just to singing and writing songs, but also worked as an actress in a few films. Some of those films are- Aquamarine, Not Today, More Than A Game, etc.

On the other hand, her fiance, Dexter Darden, is an American actor. Some of his notable film credits include- Joyful Noise, Son of the South, The Binge, Geography Club. One of his latest and notable television work includes- Saved By The Bell.

This year, on 25 December, JoJo announced the news of her engagement to her fiance, Dexter on her Instagram account. She posted a picture showcasing a sparkling engagement ring. Since then, the news is ruling over the internet. Fans are curious to know things in detail. For more details about JoJo & Dexter’s engagement, you must dig into this article and stay till the end.

Also read: Who Is Samantha Jade Engaged To? Has The Singer Called Off Her Wedding?

JoJo & Dexter Darden are Engaged: Everything To Know about the love birds

It was on this Christmas Day when the singer, JoJo, announced the news of her engagement with the love of her life, her twin flame, Dexter Darden.

In her Instagram post, Jo Jo addressed him to be the most thoughtful, creative, positive with good vibes, handsome, strong, loving, and uplifting human being. She hasn’t left any adjective to flatter him. JoJo expressed how happy she is when he has asked her to marry him. Not only that, the beautiful singer also thanked him to celebrate her 31st birthday in such a great and epic way.

They were in Puerto Rico, spending their vacation with their respective mothers and best friends. With everyone’s presence, Dexter proposed JoJo, and it made her the happiest girl in the world. Dexter thanked her for being her forever. Not only that, but he also thanked her for challenging him, pushing him to be the best person he could be. He confessed that nobody could make him smile like the way JoJo did.

It was in June 2020 when they were hinted to be dating each other as either of them popped up in their respective Instagram accounts. Initially, neither Dexter nor JoJo revealed their relationship to the public. Thereafter in July 2021, Dexter Darden posted a picture on his Instagram account, which he clicked during their date night. Since then, everyone knows that they are seeing each other. But the sudden news of their engagement made their fans very happy and proud. Fans can’t get enough of their sweet and blooming romance.

How old is JoJo?

Talking about the beautiful, versatile singer JoJo, she is originally known as Joanna Noelle Levesque. She was born on 20 December 1990. This makes her 31 years old in 2021. JoJo was born in Brattleboro, Vermont, United States. When it comes to her height, she is 1.6 meters tall.

How old is Dexter?

The professional American actor Dexter Darden was born on 24 June 1991. That makes him 30 years old in 2021. As far as his birthplace is concerned, he was born in Camden, New Jersey, United States. As of 29 December 2021, his Instagram account holds more than 268k followers. He is set to release his upcoming film Chang Can Dunk, where we will see him playing the role of DeAndre.

The news of JoJo & Dexter are Engaged have made us happy. Hoping they tie the knot real soon. We are eagerly waiting for the fall of their wedding pictures on their respective social media accounts. Good luck with their new life!

Also read: Who Is Andrew Form Dating? Is The Producer Engaged To Alexandra Daddario?