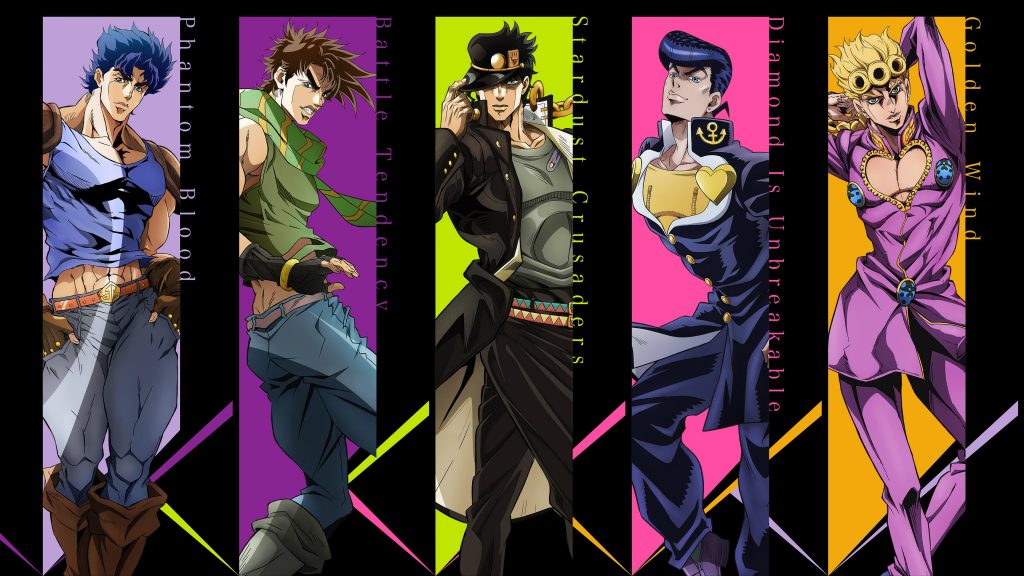 Jojo Characters Birthday. Let’s see who’s your birthday mate. Jojo’s bizarre adventure is one of those fan-favorite anime series that is quite different from others but still rules their genre. Jojo’s bizarre adventure also referred to as Jojo No Kimyo Na Boken is a Japanese manga series drafted and demonstrated by Hirohiko Araki. The manga was initially released on 1st January 1987 and is running till now, still being evergreen. The anime gained its popularity due to its unique art style and poses of characters. The manga was also adapted into an anime series that was released as a TV serial in Japan in October 2012.

The anime Jojo is set up in a world with is a resemblance to the real world but with the added spice of supernatural powers. In this world, people are capable of transforming their internal spiritual powers into Sutando and Hamon. The plot of the anime is divided into individual stories that are independent of the previous one. Till now, the series is divided into 9 Parts the latest part is called JojoLands. Further in this article, we are going to look upon the Jojo character’s birthdays.

Jotaro is one of the top main characters because he is the protagonist of Part 3 and also appeared in Part 4 to 6. This made him the third most recurring character of the whole series. Like all other characters, he has a very dramatically looking face. Strong jaw, have bold eyebrows towering over green eyes. He is tall and has an attractively built strong and muscular body. Jotaro is one of those characters who are rough outside but soft inside, loyal to his loved ones. He is quite intelligent, cool and shows a disinterested attitude in almost everything.

The character holds one of the strongest Sutando in the whole series. His sutando named Star Platinum helps him to possess some extraordinary superhuman powers along with some exceptionally good intellect, stamina, strength, accuracy, speed, and whatnot. In his early stage of life, he was a typical normal boy who likes playing and attending school. As he reached the age of 17, he generated the persona like how he is now.

Joseph Joestar is very known as the character of Jojo’s Bizzare Adventure after his grandson Jotaro Kujo. He is the protagonist of Part 2 and also recurred in Part 3 and 4. He was naturally a Hamon user but eventually developed the ability to use Sutando. When he appeared first, he was 18 years old, handsome, and a powerfully built young boy. He is a hot-headed, impulsive, and impetuous man. Easily irritable, and give violent response even on the slight provocation. Joseph has a history of indulging in brawls and was once expelled for doing so.

The ability to use Hamon is inherited from Joseph from his grandfather. He is capable of combining his Hamon with other objects in order to perform complex attacks. Upon growing up, he ditched his ripple training and that is time he started using Sutando.

Giorno Giovanna is the most recurring character to date. He is the protagonist of Part 5 – Golden Wind. Before Joseph and Jatoro, he is the most popular and recurring character of the whole series. Initially, he was introduced as Haruno Shiobana. He is an average heightened teenage boy with a muscular yet slim-looking body. He has golden blonde moderately long hair, which is usually tied back in a braid. His very abusive childhood and all the humiliation done by his stepfather made him be cold. He is uncaring to anyone and hardly has someone he loves.

The is Sutando is known as Gold Experience and is noted as one of the most versatile sutandos to date. His stand is the short-ranged power – type which is lethal as a very close range. Through his ability, he can manipulate and create a life that is used to create plants and small creatures. One of the most versatile yet powerful that made him the topmost protagonist of the series.

If you wish to read the manga Jojo’s Bizzare Adventure you can read it on Viz Media and anime will be available to stream on Crunchyroll.

ALSO READ: Anime Like JoJo’s Bizarre Adventure That You Don’t Want To Miss!