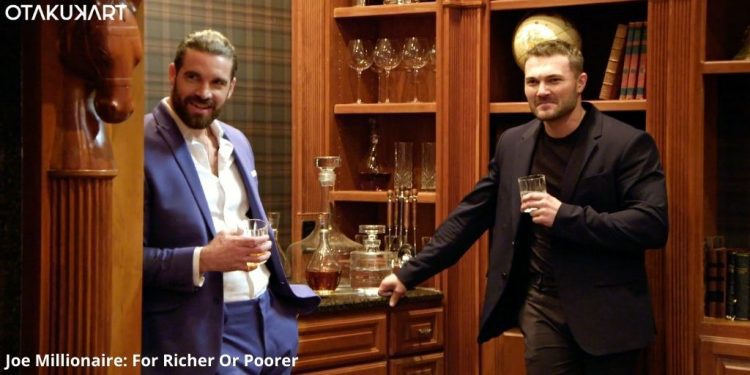 The latest dating reality show, Joe Millionaire: For Richer Or Poorer has created quite a stir in the television industry with its premiere. In addition to that, the reboot from Fox has brought in a completely different concept that makes it unique in comparison to different dating shows out there. Meanwhile, a lot of viewers might mistake it for being similar to the one from the year 2003. However, the viewers are in for a surprise. The original show “Joe Millionaire” came out in the year 2003 and made a huge impact on dating reality shows.

It had a different and intriguing concept at the time where the women were made to think that the man they were competing for was a millionaire. But with a bitter twist, the winner would later learn that the man she fell for was nowhere near to being wealthy. Although, this concept of misleading women would definitely receive a lot of backlash in this day of age. So, the developers and producers of the show came up with another unique concept. This time the women would not compete for one but two men, or we can say two Joes.

Furthermore, the biggest plot twist would be one of the men being a multi-millionaire, while the other one being not so financially strong. Hence the title “Joe Millionaire: For Richer Or Poorer”. Additionally, the women won’t find out until the end who among the two guys is rich and poor. But the best part of all this would be that the women know beforehand what they are getting themselves into. But there’s a lot more that went down during the premiere episode and got the fans excited for the season. So, let us find out what it all was.

Instant Elimination Twist That No One Saw Coming

The first night of the show gave us a look at the two Joes, Kurt Sowers and Steven McBee arriving at the Lakeshore Manor in style. We finally got to know who each one of them was and where they came from. But the most anticipated question was, who is the millionaire? Well, it was Steven who was the multi-millionaire meanwhile, Kurt was the one with a lot less money but the most swag. So, the two were evenly matched, which was also a benefit for them to keep the women guessing.

Meanwhile, the women were a mixed bag as well, with some of them being financially strong on their own, solely looking for love. Whereas some were quite straightforward about finding themselves a rich man. However, the biggest twist of all came when one of the women named Caroline turned out to be someone Steven had crossed paths with on a dating app once. Moreover, he was sure that she probably knew how rich he was, considering the fact that she followed him on Instagram.

This resulted in a big problem for everyone as it could sabotage everything even before the show took off. So, as per the rules of the show, Steven had to take a really difficult and heartbreaking decision right at the beginning. He had to ask Caroline to leave as knowing who he was would be completely opposite to what the two men were trying to accomplish, which was finding true love despite the fact whether they were rich or poor.

Also Read: Are Michelle and Nayte Still Together? The Bachelorette Season 18 Winner!

True Love Might Toss Money Out Of The Equation This Time?

Since the women can only guess who the actual millionaire is, there is more chance of them to develop real feelings for the man they eventually end up with. As the premiere episode progressed, we saw a lot of them really forgetting about the fact that one of the Joes was a millionaire and the other one was not. One of the biggest indications of this was the instant connection between Kurt and Carolyn with the first look. Although it was nothing of a “love at first sight” experience, it was something the two of them were looking to explore.

On the other hand, some of the women were happy where they were financially in life and were genuinely on the show for love. But we are only at the beginning, and there’s a lot to come in the future. Moreover, things will get interesting when the feelings will deepen from both sides. It’s only a matter of time before we start seeing some high-level drama because that’s bound to happen when around 20 women compete for two men.