What To Expect From Jobless Reincarnation Episode 11? 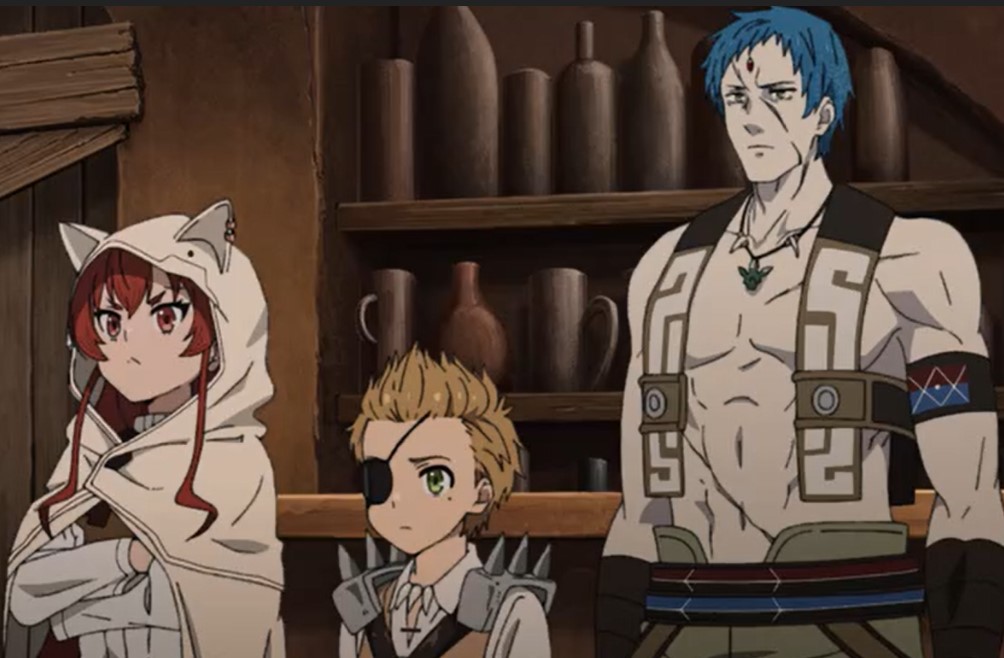 This post will be focusing on the upcoming Jobless Reincarnation Episode 11. Let’s find out how Rudy and Eris will return to the central continent. Ruijerd decided to help the two to get back home. In the evening, Eris uses her rage and kills a pack of wolves alone. The trio enjoys eating the wolves’ meat, and Rudy thought Eris would allow him to kill some wolves. But Eris killed all of them alone, and she thinks leaving like this is fun.

Rudy is thinking about eating beef, but they don’t have a choice better than to eat the meat of wolves and other scavengers. In the morning, Ruijerd travel with Eris and Rudy and heads to the city of Rikarisu. When they arrive at the entrance, Rudy is surprised to see the demons guarding the gate. They are watching the demons talking with each other while hiding nearby. Let’s find more about Jobless Reincarnation Episode Finale below.

Eris asks Rudy what they should do about the situation. Ruijerd told them no to worry; he can leap over the hills. Rudy told him to wait since the whole city will panic. Rudy disguises Ruijerd and passes the demons. They pass the demons, saying that they are from Migurd village. The trio enters the city of Rikarisu. Eris is stunned by the appearance of the city. But she almost emptied Rudy’s pocket buying different clothes.

The Devil of Superd Tribe

Rudy thinks that there is an Adventure’s Guild in this city. Eris said they could join, and Rudy said they would earn money. They both heard to the Adventure’s Guild and made a grand entrance. Rudy is wearing an eyepatch with an armored body. When Rudy and Eris enter the building, they find the Adventures fighting. Some of them are challenging each other on arm wrestling. Rudy stole the show and got all of their attentions.

One of the muscles guys asks Rudy, who the hell are you. Rudy got scared hearing the horse voice of the muscle guy. Rudy tries to act tough and told the muscle guy not to chicken out when he see his brother. Ruijerd enters the building, and Rudy comments here he is the devil of the Superd tribe. Rudy reveals that Ruijerd is the great Dead End. The muscles guy kept quiet for a moment, and Rudy asks them why they are quiet.

He asks if they are scared after seeing the Dead End Ruijerd. The muscles guy laughs, looking at Ruijerd hairstyle. The Frog reminds Rudy that the Supered have green hair. Rudy realizes that he has painted Ruijerd with blues color so that they can enter the city. The beautiful three boobed demons told Rudy that they would start on an F-rank mission. Rudy can’t keep his eyes off the chest of the beautiful demons. The Muscle guys continue to mock Rudy and his crew.

Eris notice that Ruijerd might smash the muscles guys who are mocking them. She completed the form quickly, and they went to their room. Rudy finds that they have to reach C-Rank to get the slaying job. But they are given F-Rank since they are considered to be weaklings. A muscle horse confronted Rudy and told him that he must to troubled himself thinking about a high-ranked mission. He can go and look for a missing cat, and it suits him.

The horse guy said even his Dead End guy could also find a lost Kitty in no time with his third eye. They continue to tease Rudy and his friends, but Rudy told Ruijerd to follow him. The frog guy wanted to stop Ruijerd from leaving, but Ruijerd just looked at him, and the guy let him go. When they are outside, Rudy to Eris not to worry since they are making progress.

He reveals that making a grand entrance is part of his plan to help Superd Tribe get their honor back. He told Ruijerd to continue acting as a Migurd. Later they battle with the demons who were abusing the weak ones. They manage to restrain them, but one of the demon’s hurt Rudy. Ruijerd saw that they are evil and cut one of their head. Rusy told Ruijerd not to kill again, or it will ruin the reputation of Superd.

Armie Hammer Net Worth in 2021, Early Life, Career and Earnings