Finally, the fantasy thriller ‘Jirisan’ has concluded with a happy ending yet, fans are wondering about its season 2 possibility! It is not a new thing that kdrama fans want more seasons. It is an indication that the series has captured viewers’ hearts, and Jirisan is one of them! The brilliant cinematography, mind-blowing twisting plotline, and outstanding performances by the cast have made it a perfect drama. We should give brownie points to Jun Ji Hyun, Ju Ji Hoon, Oh Jung Se, and Jo Han Chul for making Jirisan more enjoyable with their lovely-bickering chemistry.

The South Korean drama ‘Jirisan,’ also known as ‘Mount Jiri,’ is the story of Jirisan National Park Rangers. Those Rangers dives into the scorchy fire, stormy flood, and icy winter to save people. Although the drama is fictional, it has shown the distinct shade of Rangers, who go through all hardships to rescue people. All the cast, especially the Ranger team, have given flawless performances even while filming in challenging sets. The kdrama has executed the main storyline perfectly, yet; there is enough room for Jirisan season 2.

Is It Possible To Have Jirisan 2?

The kdrama ‘Jirisan’ has recently concluded, giving us a happy ending. Till the last moment, everyone was waiting for Hyun Jo to appear. And thankfully, he did! Therefore, the drama has ended on a happy note. Sadly we did not see much interaction between Yi Gang (Jun Ji Hyun) and Hyun Jo (Jun Ji Hoon). Also, some questions have been left unanswered, making the audience curious about the possibility of the Jirisan season 2. If we follow the storyline, of course, there is enough room for the next season. After all, Mount Jiri is a fantasy thriller mystery. Focusing on the main two elements, Hyun Jo’s vision and solving various cases can lead to the Jirisan 2. However, the final decision is in the hands of director Lee Eung Bok and Writer Kim Eun Hee.

The Writer Kim Eun Hee is also the creator and screenwriter of Netflix’s Kingdom series. It will be great if she brings a new twist and creates the next season of Jirisan! There is a scene showing Yi Gang has something to tell Hyun Jo. However, the writer never shows us what she wants to tell him. Therefore, viewers are wondering about the possibility of season 2. If we follow the main plotline, the drama has concluded, closing all loose ends except for small details, which can be easily ignored, such as Kim Woong Soon’s death. In short, if the production team decides to go with the next installment, yes, there is sufficient scope to make it!

The first season of Mount Jiri ended on 12 December 2021. Unfortunately, the production team has not announced anything about Jirisan season 2 yet. It is not revealed if the team has renewed or canceled the next installment. The drama has ended on a sweet note, giving each character the happy ending they deserve. However, the heart wants what it wants! The chemistry between the cast member is one of the significant reasons after the amazing cinematography, why viewers have enjoyed the drama so much. If the production house creates Jirisan 2, it will be around the second half of 2023 or the first half of 2024.

Appreciation post to all the casts & staffs, the production team, writer, director and to those who made Jirisan possible! Thank you for sharing us the life of Rangers and showing us the beauty of a mountain. #Jirisan ❤️🥺❤️#JirisanEp16 pic.twitter.com/7BRFl4Wxlr

From season one’s cinematography, you can already predict how much effort the staff has put into it. Therefore, the team needs at least one year gap before starting the next season. Jirisan season 1 was premiered on 23 October 2021 and ended on 12 December 2021 with 16 episodes. iQIYI’s official YouTube channel has released behind-the-scenes videos. The video clips reveal the hard work of the production team and the cast with some playful moments! Therefore, fans will have to wait for a while to get updates on Jirisan season 2.

Watch the second season of Mount Jiri Online- Will It Be Available On Netflix Or iQIYI?

Jirisan season 1 broadcasted on the tvN channel and on iQIYI for international fans. iQIYI had acquired the exclusive right to distribute. Therefore, there is a high possibility even Jirisan season 2 will be available on the iQIYI streaming platform. If it happens, the second season can’t be streamed on Netflix due to the complicated distribution rights. You can watch Jirisan on TVING, accessible only in South Korea. As for global viewers, Mount Jiri is available on iQIYI. You can download their app or visit the website. All 16 episodes are available with English Subtitles. 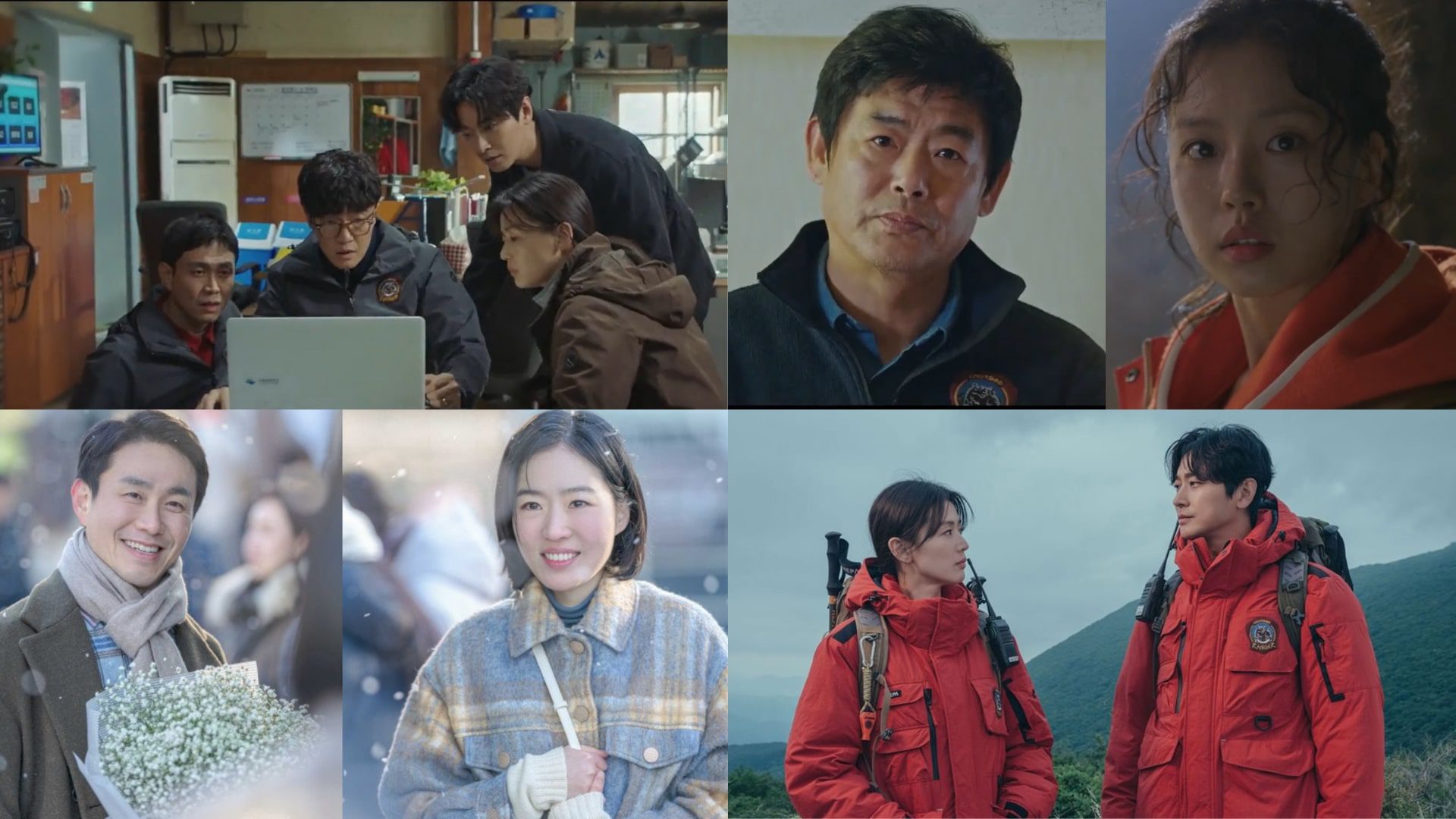 The upcoming season can also be the same as the previous one, narrating the tale of Rangers who dive into danger to save people who go in the mountains. The writer can twist the storyline a little bit. As we all know, the first season shows Hyun Jo acquires a special ability to see the deaths that happen in the mountains. Therefore, Jirisan 2 can continue this vision theory. And this time, rather than a serial killer, Hyun Jo and Yi Gang can rescue people with different background stories. However, since the director has not commented about the next season yet, it will be too early to predict season two’s story.

The previous season follows the Mount Jiri rangers Yi Gang and Hyun Jo. Seo Yi Gang is one of the best rangers at Jirisan National Park and knows everything about the mountain area like the back of her hand. On the other side, Kang Hyun Jo is a rookie ranger who graduated from the military academy. He was once used to be an army captain. After an unexpected event, Hyun Jo begins to see deaths occurring at the mountain. Thus, Jirisan unfolds the fantasy tale with a thrilling ride along with Hyun Jo and Yi Gang!

Jirisan will not be Jirisan without Jun Ji Hyun and Ju Ji Hoon. After all, they are the needle and the thread of Mount Jiri! The original casting is the main essence of the drama. Therefore, it will be sad not to see them in season two. It is up to the director Lee Eung Bok and writer Kim Eun Hee to choose the casting. However, it is unlikely to see the main cast getting replaced. Thus, in Jirisan season 2, we will meet Jun Ji Hyun, Ju Ji Hoon.

Also, there will be our favorite Park Rangers, such as Oh Jung Se as Jeong Gu Yeong, who has become a team leader, Jo Han Chul as Park Il Hae, our newly became commander. The supporting cast will include No Youn Ju, Jang Young Hyeon, Kim Tae Hoon, Ha Nam Woo, Ah Jung Hoon, and many more. Since Lee Yang Sun (Joo Min Kyung) and Lee Da Won (Go Mi Si) have already died in season one, we will see new female supporting characters for rangers. Hence, fans should look forward to the next installment of Jirisan Korean drama!

What Happened In Jirisan Season 1?

The television show ‘Jirisan’ is a fantasy mystery thriller that revolves around the second tallest mountain in South Korea. The drama follows the stories of Rangers who protect the mountain and people who visit it and the mountaineers who hold different beliefs while traveling through the deep valley of Mount Jiri. Whereas Seo Yi Gang is the best ranger, Kang Hyun Jo is a rookie ranger. The two team up and begins working to rescue people. Little by little, mysteries uncover, and Hyun Jo tells his secret of seeing deaths to Yi Gang. She initially denies it as his delusion. However, the little piece of the puzzle starts to connect with each other.

Past and Present Are Connected, Narrating A Fantasy Tale Of Mount Jiri

The drama flows in different times, the present 2020 and the past 2018, 1995, and 1991. It begins with the 2018 timeline, where Yi Gang and Hyun Jo meet and grow on each other. By the 2019 winter, they get injured while catching the serial killer who has been killing people in the mountain. The 1995 timeline shows the flood accident that is related to Yi Gang’s parents’ deaths. Meanwhile, the 1991 time is the core of the problem! It reveals that the killer, Kim Sol, lost his family due to Black Bridge Villagers’ greed. Hence, when he learns that everyone has forgotten what happened in 1991, he decides to take revenge and begins killing each one of them!

the personification of the phrase "i love view" 😭😆#Jirisan #JirisanEp16 pic.twitter.com/LlphALpPRy

However, his plan disturbs due to Hyun Jo since he sees only the death of people killed by Kim Sol. While saving people from the killer’s cruelty, some rangers lose their lives. Yi Gang and Hyun Jo also face natural calamities like wildfire, floods, and snowstorms. Finally, in 2020, Yi Gang, with the help of Hyun Jo’s spirit, discovers the killer’s identity. Therefore, Jirisan ending concludes on a happy note with Hyun Jo waking up from a coma state and all rangers getting their own happy ending! The chemistry, cinematography, and fantasy, thriller story make fans eager for Jirisan season 2! Thus, keep your eye on the news to know the latest updates about the second season of Mount Jiri.