Jo Dae Jin and Jung Go Young are off the suspect list. However, a new person is on the list now. The mystery is getting thicker with the writer playing hide & seek with the killer's identity. 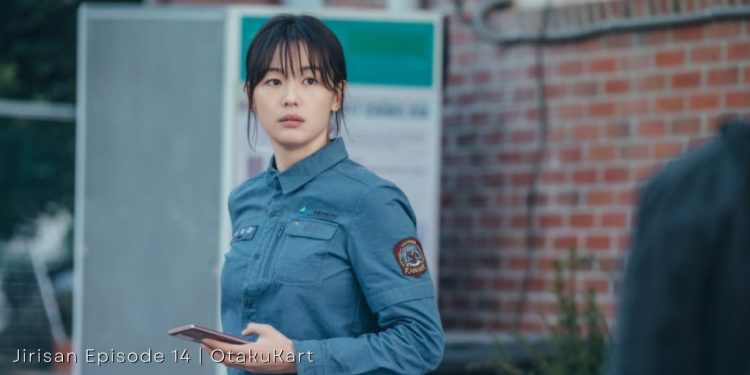 With the finale of this dark mystery coming closer, Jirisan Episode 14 is a few days away! With the scene revealing Lee Yang Sun rescues Choi Hee-Won (the lottery ticket girl), it seems we have to eliminate some names from the suspect lists, such as Jo Dae Jin, Jung Go Young. Because both were at the rescue camping sits with the other rangers. However, with Go Young leaving, Park Hae Il’s name is on the same list now. With Park Hae Il, we have Kim Sol, Kim Woong Soon as prime suspects.

Besides the serial killer plot, the drama also shows Hyun Jo and Yi Gang’s bonding getting stronger. It seems with the 2019 flooding incident, Hyun Jo blames himself for losing his people. Something happens to Yi Gang’s grandmother as well. Because we have not seen her in the 2020 timeline. However, amid this battle, we all have found the reason why Yi Gang and Hyun had gone to the top of the mountain on that snowy day. As Hyun Jo predicted, the killer is definitely linked to the 1995 Dowon Valley Flood incident but, his identity is still an unsolved riddle! Therefore, Jirisan Episode 14 will solve this riddle of the story!

Jirisan Episode 14 will be released on 5 December 2021 at 9 pm KST on the tvN network. The other countries’ time schedule is different, such as it airs at 5.30 pm in India, 7 am in the USA, at noon in the UK, and at 11 pm in Australia on the same day. The story is entering the finale with the killer’s identity revealing little by little. The writer really wants us to find out his identity before they expose the mastermind. For this, we will have to order all the clues to see the big picture hidden in the little puzzles. Thus, to solve this eerie mystery, you can watch every new episode of Jirisan Friday and Saturday; each episode airs for 60 min.

Domestic fans can watch Mount Jiri on tvN at 9 pm. It will also be accessible on TVING (only for South Korea). Global fans can stick with online streaming channels such as iQIYI and Viki, where Mount Jiri Korean drama is available with English Subtitles. You will have to buy their subscription plan for the given streaming options, which may differ according to different countries.

What To Expect In Episode 14 of Jirisan?

With getting closer to the ending, Jirisan Episode 14 will be the last turning point of the storyline. There are two questions which answer we all have been looking for. The first is about Hyun Jo’s well being and the second is about the killer’s identity. Furthermore, we have learned, from the beginning the writer was intended to play with us, not giving us clear hints about the killer.

He's really suspicious i mean i know that there's kim sol and he's not a ranger but there's something fishy about him too and i doubt that his character is just like this#Jirisan #JirisanEp12 pic.twitter.com/Oc5LfHHBGk

The Killer And The 1995 Dowon Valley Flood Connecting All Dots

The drama reveals all the victims who were murdered in the mountain are related to the 1995 Dowon Valley Flood incident. For now, all we know is that Yi Gang’s parents, Kim Nam Sik and the elder pair, passed away in that awful unfortunate natural calamity. However, the incident is not fully uncovered. If the killer is going after those people who survived that natural calamity, there must be something more to it. There may be a connection between the 1991 Black Bridge Village and the 1995 Dowon Valley Flood, which can also be related to the serial killers. For now, we still have many names on the suspect list, such as Kim Sol, the police officer, and even Park Hae Il. Therefore, Jirisan Episode 14 will unveil this puzzle for us.

What Has In The Store For Hyun Jo?

Lastly, the most concerning part is about Hyun Jo’s well-being. No updates are given on his condition except that he is on a ventilator, and his family will make the final decision. However, Yi Gang is not ready to give up and is doing a secret investigation with Park Hae Il to reveal Go Young’s face. But then again, we discover that Go Young can not be the serial killer since someone else was there on the mountain when Lee Yang Sun got hurt and Go Young was at the camping site with the others. However, Park Hae Il was not there. Hence, he is on the suspect list. At this point, Hyun Jo needs to wake up and reveal some hints about the killer. Thus, look forward because Jirisan Episode 14 unveils Hyun Jo’s side of the story!