The killer is going after Lee Yang Sun this time. No ranger has found any trace of her yet. 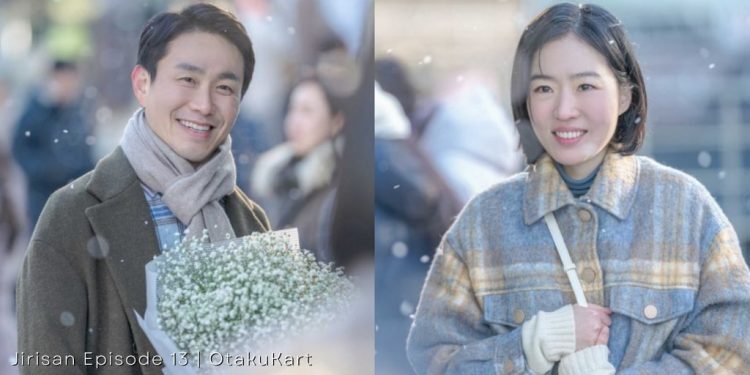 Jirisan Episode 13 coming soon to narrate the last chapter of Go Young and Yang Sun’s love story! One by one, rangers are getting eliminated in both timelines. First, it was Lee Do Won, and now Lee Yang Sun! The previous episode has already warned us to expect the worst in the next installment. Also, we have not seen Yang Sun in the 2020 timelines. Therefore, the upcoming episode will bring the worst but a way to clear Go Young’s name from the suspect lists. If Go Young is not the culprit, who could it be? Park Hae Il?

The latest episode also reveals what happened in the 1995 timeline during the Dowon Valley Flood incident. Hyun Jo has also discovered a new lead, which directs all the victims who were murdered are somehow related to the 1995 Dowon Vallet Flooding incidents. With the revelation, no suspect stands out, leading us in a circle, and we are back to zero! However, with Lee Yang Sun’s accident in the 2019 timeline and Yi Gang and Hae Il investigating in the 2020 timeline, we will be getting new hints in Jirisan Episode 13. It will help us solve this dark mystery behind the brutal murder cases that happened in the mountain valley.

Ep 12 of Jirisan reveals, in the 2019 timeline, the whole village has to face the unfortunate event once again as the unexpected torrential rain begins pouring, creating an emergency situation. All rangers gear up and start to clear valley areas, saving people from the dangerous rainstorm, which is on the verge of sweeping down the whole village. Meanwhile, Hyun Jo and Yi Gang rush to Mujin Valley, Fox Hill, to rescue the ecology team member. However, at the top, they also encounter an injured hiker. Because of his injured leg, Yi Gang stays back with him while Hyun Jo guides the others down to the rescue center. Before leaving, Hyun Jo warns her about the hiker since the hiker is wearing the same gloves he saw in the signal.

The rescue operations scenes have been done multiple times in the series but they manage to keep the same level of intensity because of the casts. Good portrayal of modern day heroes. 😭💯#JirisanEp12 pic.twitter.com/wbdlmhqvei

While waiting for the supporting team, Yi Gang learns that the injured hiker, Shin Mun Sung, is a survivor of the 1995 Dowon Valley Flood in which she had lost her parents. He also tells about the couple he and his friends met at the stone pagoda valley and how the man wanted to become a good father. That couple turns out to be Yi Gang’s parents. An emotional scene shows Yi Gang finally learns that her parents did not commit suicide and stayed behind to get her insurance money. It was just they made a decision that unfortunately turned out to be wrong. All those years of pain and regret overflow as Yi Gang cries with Hyun Jo staying by her side.

Lee Yang Sung Is In Danger

On the other hand, to rescue the lottery-ticket girl, Lee-Yang Sun decides to go since no ranger is available besides her. However, that leads her to a danger which no one sees coming. All rangers come down after completing their missions. The elders who have brought food for our heroes leave, seeing everything is normal. But the episode end reveals a man does something to the roop which Lee Yang Sun uses to rescue the girl, and all we can hear is Lee Yang Sun and the lottery-ticket girl’s screams! If everyone is down, who will harm Lee Yang Sun? Find out the dark tale of Mount Jiri unfolding the last chapter of Go Young and Lee Yang Sun’s love story in Jirisan Episode 13!

Also Read: Her Private Life Kdrama: Cast Updates And Where To Watch

Jirisan Episode 13 will be released on 4 December 2021 at 9 pm KST on the tvN channel. With only four episodes left, the story has dived into a new pool of mystery! The writer definitely knows how to play with our minds. However, the upcoming Ep 13 will bring a major turning point to the story. We will learn about Jung Go Young and Lee Yang Sun’s love story. Certainly, the serial killer has done something to Yang Sun and the lottery ticket girl, Choi Hee Won, while Yang Sun tries to her. Will he successfully kill both of them? Or will Yang Sun get out of this danger?

The Last Chapter Begins, Leading Us Closer To The Killer

The preview of Jirisan Episode 13 is already out, showing us all rangers go out their way for Lee Yang Sun. However, they don’t find any trace of her. Not only Lee Yang Sun, but the killer also goes after the elders’ bus! He wears the ranger’s uniform and directs them towards the bridge that could end up taking their lives. And it does seem something unfortunate will happen to Yi Gang’s grandmother. Besides, Hyun Jo seems under the pressure of the deaths which are bound to happen. For now, most of us are worried about Lee Yang Sun’s wellbeing. Hopefully, Jirisan Episode 13 enlightens this matter, giving us more clues about the real killer.

South Korean viewers can watch Mount Jiri drama on the tvN network at 9 pm KST. As for other countries, Episode 13 will release on the same day at 7 am in the USA, at noon in the UK, at 5.30 pm in India, and at 11 pm in Australia. International viewers can go head with online streaming channels such as Viki and iQIYI. The kdrama is available with English Subtitles.

Also Read: Never Twice& Review: Why You Must Watch this K-Drama?

Is Brittney Shipp Pregnant? All About The American Meteorologist