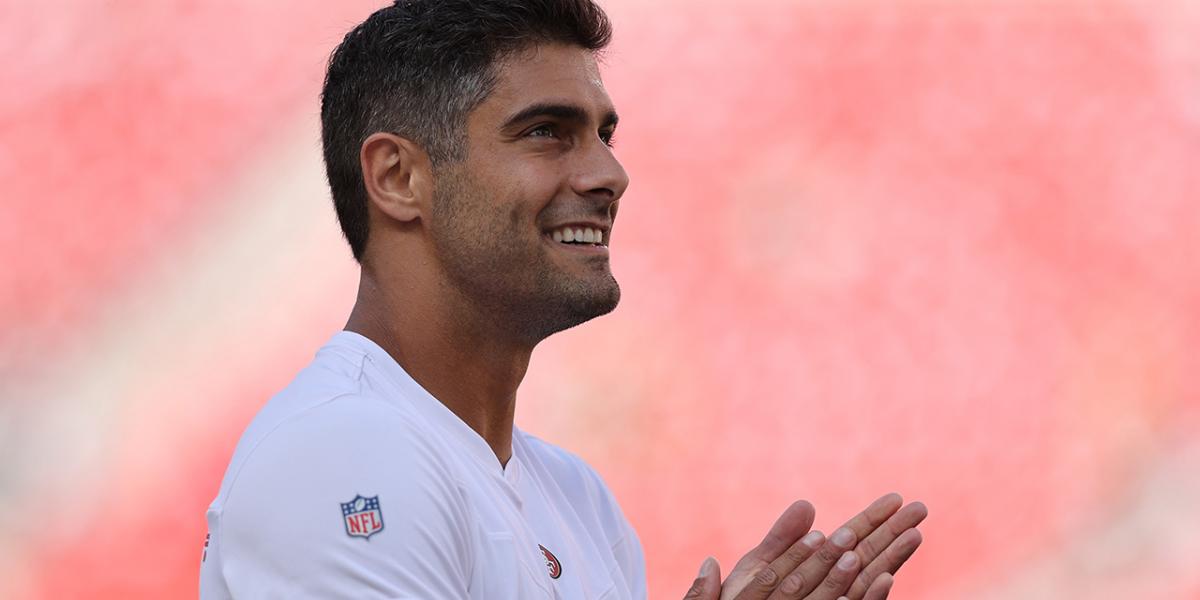 Have you bought the session tickets for 2021? This year’s season has not proved to be a good one for the 49ers’. The team is in the news for selecting the veteran player Jimmy Garoppolo as their quarterback in NFL 2020. Though it is obvious that Jimmy Garoppolo is not the best quarterback in the NFL, seems like the 49ers’ compromised with their preference. Succeding in the article, we’ll take more about what happened in the recent game against the packers?  Also, the football player is in the news over the question of who is Jimmy Garoppolo’s girlfriend? But first, let us get you familiar with who is Jimmy Garoppolo?

Jimmy Garoppolo’s full name is James Richard Garoppolo. His familiars call him Jimmy G. In 2017, he signed a contract with the San Francisco 49ers’. Like every professional football player, Garoppolo also started playing as an amateur in college. He played for the team of Eastern Illinois. Moreover, Garoppolo was a star player from the starting. He set many school records and won the Walter Payton Award for his performance. If you are starting to like Garoppolo already, brace yourself; there is more to come. As of his education, he attended Rolling Meadows High School. Here is where Jimmy started his journey with football. He was a linebacker and quarterback for his school team, Mustangs. Please keep reading to know all about Jimmy Garoppolo’s career, girlfriend, and recent performance in the 2021 session game.

Also Read: Lamar Jackson Girlfriend: Who Is The Footballer Is Dating In 2021?

Who is Jimmy Garoppolo’s girlfriend?

Like any celebrity, Jimmy is rumored to be dating many people. But the most famous relationship that has caught the public eye was with Jimmy Garoppolo’s girlfriend, Alexandra King. Alexandra King is a popular social media influencer. Also, she is a designer and photographer. Moreover, She has Jimmy to thank for her popularity, as Alexandra only received attention when rumors of her dating Jimmy Garoppolo surfaced. If you are wondering where she was born? Alexandra was born in Boston, Massachusetts. Her marital status is unmarried, and she has no children.

The exact time when the 26-year-old model started dating Garoppolo is not clear. But the couple came into the limelight as Alexandra would post many pictures of them together. The intimate pictures confirmed their relationship. Though when it’s a fling, it’s a fling. Jimmy Garoppolo never acknowledged his relationship with Alexandra. The controversy that was the most interesting part of their relationship was their breakup. The couple broke up amid Jimmy’s involvement with adult film star Kiara Mia. Their split was a sore sight to watch. Alexandra deleted all her posts with Garoppolo and wrote a caption saying ‘Karma.’ 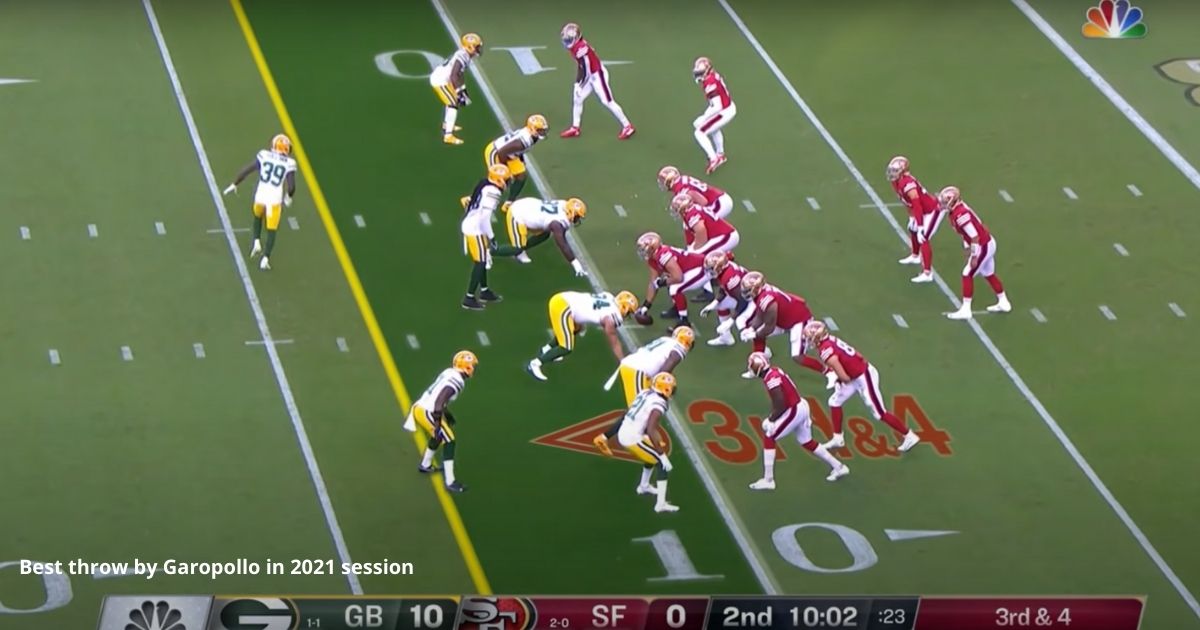 In 2014, Garoppolo made his debut in New England Patriots season. As a rookie, he played six games in the session. In 2016, coach Bill Bellichick made Garoppolo the starting quarterback in the first game. Following in week one Garoppolo team scored a win against Arizona Cardinals in NBC Sunday night football.

In 2017, Garoppolo was traded to the San Francisco 49ers in the 2018 NFL draft. And in 2018, the coach decided to make Jimmy Garoppolo the starter in the match against Chicago Bears. In the second game, he had the second-highest yard passes in a match against Tennesse Titans in week 14.

Speculations are being made that Garoppolo’s game is not the same since joining the 49ers’. What is the problem with Garoppolo’s game? Recently, on Sunday night game, Garoppolo was not able to give his 100% in the first half. 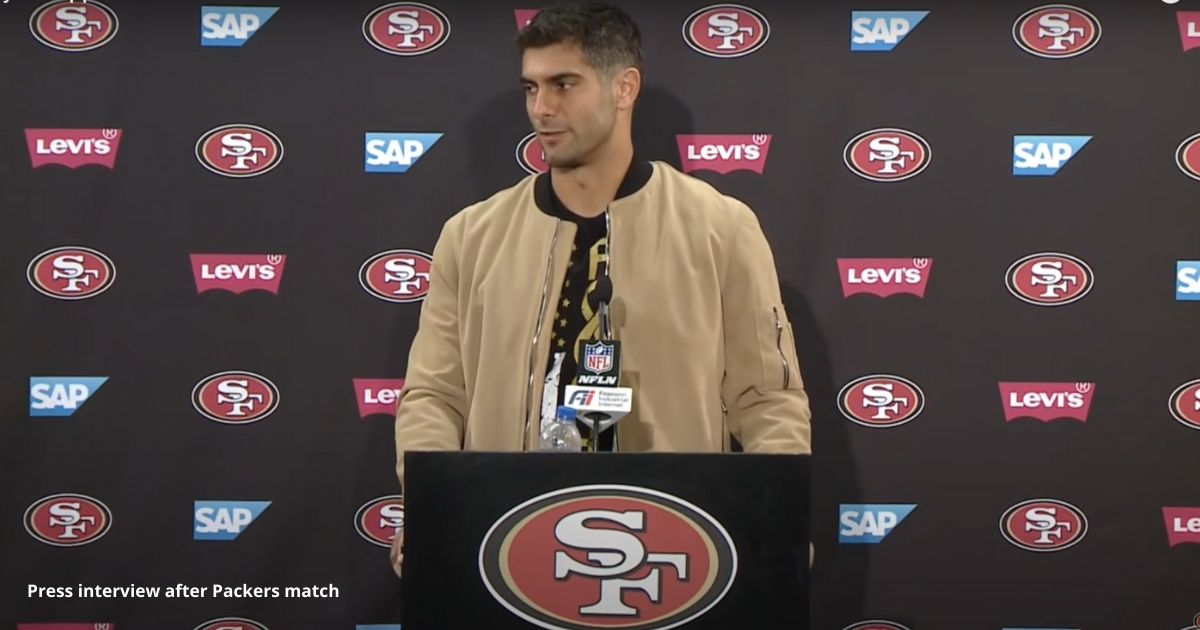 He made a fumble in the 4th quarter. Also, he made an assumption and tried to get rid of the ball to avoid a sack. His interception on a deep throw to George Kittle was also a fail. The only aim Garoppolo should have had was to get his team to the end zone. At last, failing with securing the 49ers’ objective, the team turned an easy win into a sad failure. The loss of the team against the packers was a matter of their weak defense.