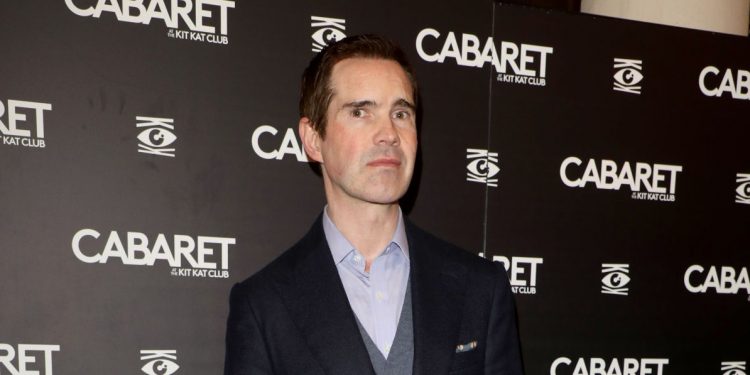 After multiple appearances on 8 Out of 10 Cats, Your Face Or Mine, and The Big Fat Quiz of the Year show, Jimmy Carr has become a TV staple. Carr has been in the public eye for 20 years, but much of his personal life is kept hidden. Who is Jimmy Carr’s Girlfriend? Here’s the lowdown about his family and relationship. But, before we get into his personal life, let’s take a look at Jimmy Carr in general. He is a stand-up comedian with Irish-British ancestry. James Anthony Patrick Carr was born in Hounslow, London, England, on September 15, 1972.

Carr was the second of three sons born to Nora Mary and Patrick James “Jim” Carr, an accountant who went on to become the treasurer of Unisys, a computer company. He hasn’t worked in this field for a long time. People adore him for his sharp humor and amusing interactions. He quit his work in the early 2000s to pursue a career as a stand-up comedian. Jimmy was born in the English town of Hounslow. Jimmy, on the other hand, relocated to a village in Buckinghamshire and stayed there for the rest of his life. Carr attended Farnham Common School and Burnham Grammar School for his education.

Carr was always loved and appreciated by everyone as a child, and he was one of the brightest pupils in the school. What’s more, guess what? He was a social science and political science student. Jimmy received a first-place finish in graduation in 1994. Carr landed a job as a marketing executive almost immediately after graduating. However, he was dissatisfied with his current way of life. He wished to leave that particular department. Jimmy realized he needed to pursue his passion of becoming a stand-up comic as time went on. And now he’s here.

Jimmy Carr is currently involved in a relationship with her long-time girlfriend named Karoline Copping. During the audition in 2001, Copping and Carr met for the first time during a TV interview. After a few meetings between them, the couple decided to form a girlfriend-and-boyfriend relationship. During an interview, Jimmy revealed that he didn’t make a good first impression on the woman who would become his long-term partner.

He said that he viewed her notes in which she described him as a “one-note comedian with the eyes of a sex offender.” The couple Carr and Copping have been together since 2001, despite the fact that they have never married. After nearly two decades of love, the couple decided to start a family and welcomed a baby boy named Rockefeller. Jimmy didn’t share the name of his son until October 2021. Jimmy, Karoline, and their kid currently reside in Primrose Hill, an affluent London neighborhood with a property worth an estimated £8.5 million.

Who Is Karoline Copping?

Karoline Copping is a television personality who was born in Canada. Copping’s work as a commissioning editor for Channel 5 is well-known. Karoline was born and raised in Canada, but she has kept her family a secret so far. Copping is also well-known for her relationship with Jimmy Carr, an English actor, comedian, TV host, and writer. Marnie, her pet dog, has been living with her lover. Karoline has made a number of public appearances with her partner Carr. In the video documentary “Jimmy Carr: Stand Up,” she is given particular gratitude. Karoline’s funds come from her work as a journalist. Her estimated net worth has been kept a secret. When it comes to social media, she isn’t on Instagram, Twitter, or Facebook.

Some Facts About Jimmy Carr:

Carr’s involvement in an alleged K2 Tax Avoidance Scheme was revealed in June 2012, following an investigation by The Times newspaper. Carr later withdrew from the scheme and apologized for making “a catastrophic error of judgment.” Jimmy had lost confidence in religious beliefs since he was a child. To pull himself out of his binds, he used various techniques such as neuro-linguistic programming. In addition, he is a licensed therapist. He had no intention of becoming a marketing executive.

He fell into the grips of sadness as a result of his poor decision-making. Carr was depressed until he chose to pursue a career in stand-up comedy. Even as a television personality, he chose to go on numerous tours throughout the United Kingdom. Jimmy has received numerous honors for his efforts during the course of his career. The LAFTA award for Funniest Man and the LAFTA award for Best Stand Up were among the honors bestowed. Because he was in his mid-twenties, experiencing depression was quite stressful for him. Despite this, he was able to pull himself out of all of his bad choices and finally mold it the way he wanted.