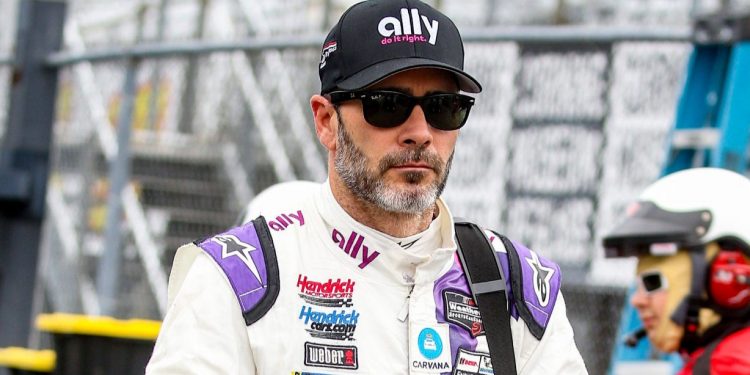 Jimmie Johnson is a well-known American racing driver who currently competes for Hendrick Motorsports. Johnson became the first driver to win the National Association For Stock Car Auto Racing Automobile Racing (NASCAR) Cup Series five times in a row from 2006 to 2010. Also, he became the third driver to become a seven-time champion after winning in 2013 and 2016. His full name is Jimmie Kenneth Johnson. Johnson was born on September 17, 1975, in El Cajon, California, USA. He was born to parents Catherine Ellen and Gary Ernest Johnson. Johnson grew up along with his two brothers, who were named Jarit and Jessie. He started riding motorcycles in the year 1980 at the age of 4. Johnson regularly participates in triathlons and marathons. Also, he was very much interested in art and photography. So What is Jimmie Johnson’s Net Worth?

Jimmie then participated in numerous events approved by Mickey Thompson Entertainment Group (MTEG) and won many awards. He graduated from Granite Hills High School in the year 1993. Jimmie then rode motorbike racing on weekends. He represented the university for swimming, diving, and water polo. Thanks to his 83 racing win in his career so far, he is forever ranked sixth. He has the credit of achieving 222 top 5 finishes. He was the first driver to be named the “Associated Press Male Athlete of the Year” in the year 2009. Among all the active drivers of the “NASCAR,” Johnson has the most wins at the “Auto Club,” “Las Vegas,” “Dover,” “Charlotte,” “Texas,” and “Kansas” track. Also, he has nine wins at “Martinsville Speedway.”

He also owns various luxury cars like the 1971 Chevy Corvette, Chevy SS, 1967 Camaro, and Ford Fusion. Also, we are sure that there will be more in the future. The brands which Jimmie Johnson endorses include Gatorade, Seiko Watch Corporation, Blue Bunny, and Chevrolet. He also made $5 million through sponsorship. Jimmie Johnson also owns a house in Charlotte, North Carolina, where he lives. Also, Jimmie owns a home in New York that is said to have been purchased for $14.25 million. All this makes him the highest-paid NASCAR driver in the world.

By the year 1993, Jimmie had proven himself to be a great racer and had raced trucks and buggies in the desert as well as on off-road stadium races. He also began reporting to ESPN at the Short Course Offroad Drivers (SODA). In the year 1996, he started driving for Herzog Motorsports in the off-road truck series. The following year he moved to SODA Class 8. Prior to joining the American Speed ​​Association (ASA) in the year 1998, he won over 25 wins, 100 top 3 finishes, six championships, and Rookie of the Year Awards in three leagues, namely SODA. “SCORES” and “MTEG.” After joining “ASA,” he started racing on asphalt and was called “SHA part Schauer Memorial Rookie.” The following year Johnson finished third in the series.

Johnson began competing in the full Winston Cup Series in the year 2002. Jimmie’s first career pole position came in Dayton 500. Then, early in his 13th career, he took his first win in the NAPA Auto Parts 500. Johnson eventually finished fifth in points in his first full season. He did even better in 2003 by coming second just behind Matt Kensett. In the year 2004, he won the Coca-Cola 600 and had a good chance of winning the championship. However, a season-ending fall at Homestead-Miami Speedway led him to finish fifth in points.

In 2011, Johnson’s winning streak ended in sixth on points and just two wins that season. The following year he did even better. Johnson returned to championship form in 2013, picking up six wins, three poles, and 24 top ten spots to win his sixth NASCAR Cup title. After the 2014 and 2015 seasons, Johnson returned in 2016 and won his seventh championship. With that win, he equalized with Richard Petty and Dale Earnhardt for the most championship wins in NASCAR Cup history. Johnson’s final racing years in NASCAR were tough. In the year 2017, he experienced a serious slump over the summer and took 10th place in the overall ranking.

Due to his popularity, Johnson has made various appearances in films and televisions as well. In the year 2005, he played a cameo role in the sports comedy “Herbie: Fully Loaded.” That same year Johnson starred in an episode of the NBC series titled Las Vegas. In the year 2013, Johnson co-hosted ESPN’s SportsCenter, becoming the first professional athlete to do so. His other television appearances include the animated children’s shows “Bubble Guppies” and “Blaze and the Monster Machines.” He has done voice-over work for both of these animated children’s shows.

Also Read: What is Freddy Dodge’s Net Worth? Career & Earnings