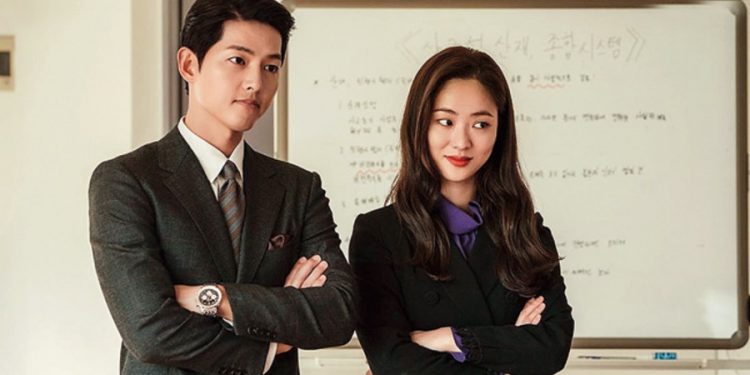 Song Joong Ki and Jeon Yeon Been in 'Vincenzo'

Blue Dragon Awards 2021 were adorned by A-list celebrities. But, the Vincenzo couple – Jeon Yeo Been and Song Joong Ki made it a memorable night for all the Kdrama fans. After delivering solid chemistry in Vincenzo’s hit crime drama, the pair reunited and showed how perfect they are, even in real life. The two looked effortlessly gorgeous while walking down the Red Carpet. Moreover, the interactions between the two are spread all over the internet.

The Blue Dragon Film Awards is an annual award ceremony organized by Sports Chosun to appreciate excellent cinema in South Korea. It is attended by A-list actors, who make contributions to the most significant projects and events of the year.

This year, the red carpet was garnished by the gorgeous looks and outfits of many. Park Eun Bin, Song Joong Ki, Jeon Yeo Been, AOA’s Seolhyun, Lee Kwang Soo, and Krystal Jung are some of the stars who attended the big event.

Jeon Yeo Been and Song Joong Ki appeared in beautiful attires. Also, the two supported each other for their respective nominations at the Blue Dragon Awards 2021. The two ex-co-stars sat together to pose for multiple pictures as well. The mini yet elegant reunion of the leading couple of Vincenzo was enough to start a buzz on social media. The new shots of the reel-life couple are circulating from one account to another and the two Vincenzo leading stars soon became one of the biggest highlights from the evening.

The two showed their strong friendship with a fist bump as they approached the stage to receive their ‘Popularity Award.’ Since the ‘fist’ was the onscreen pair’s personal statement, it resurrected thousands of feelings among the fans.

Song Joong Ki was married to her ‘Descendants of the Sun’ co-star Song Hye Kyo. The two, however, parted ways in 2019 and have been single ever since. During ‘Vincenzo’s airing,’ he was linked to Jeon Yeo Been, but the two are just friends and, the fans seem to enjoy their friendship more. You can watch Vincenzo here, on Netflix.